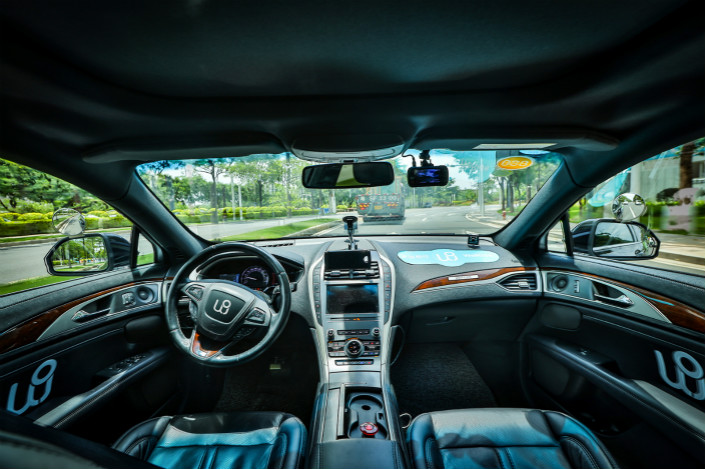 Chinese autonomous vehicle startup WeRide said Friday it has obtained the country’s first license to test fully driverless cars on designated open roads in Guangzhou, taking a step closer to its dream of transporting passengers with their “robotaxis” capable of tackling traffic emergencies by themselves.

Nissan-backed WeRide will connect the test vehicles with a 5G-enabled remote control system, which will take control of the car when facing unusual traffic conditions such as road closures or temporary changes to traffic rules by authorities, according to a statement.

A WeRide representative told Caixin there will be a backup driver in the back seat during road tests.

In a statement, WeRide founder and CEO Tony Han said his company “will pursue fully driverless technology in the next two to three years.” The company claims to have logged more than 2.6 million kilometers of open road tests by their fleet of more than 100 self-driving vehicles.

In June, the 3-year-old company expanded the rollout of its autonomous taxis in a designated area in Guangzhou, allowing users to hail autonomous rides through either Alibaba-backed navigation app Amap or WeRide’s own app WeRide Go.

In China, WeRide rivals including search giant Baidu, ride-hailing titan Didi Chuxing, Toyota-backed Pony.ai and Alibaba-backed AutoX, have all started trialing their own “robotaxi” services, although human drivers are there just in case.

The self-driving spree is in line with Chinese government policy setting out a target of achieving mass production of cars with “conditional” self-driving capabilities by 2025. “Conditional” driving automation refers to Level 3 technology, which allows a car to drive itself only under certain circumstances and requires a human driver to be ready to take control in case of an emergency.