Trending in China: Was the Driver Who Deliberately Crashed His Bus Killing 21 Evil or a Victim? Netizens Discuss 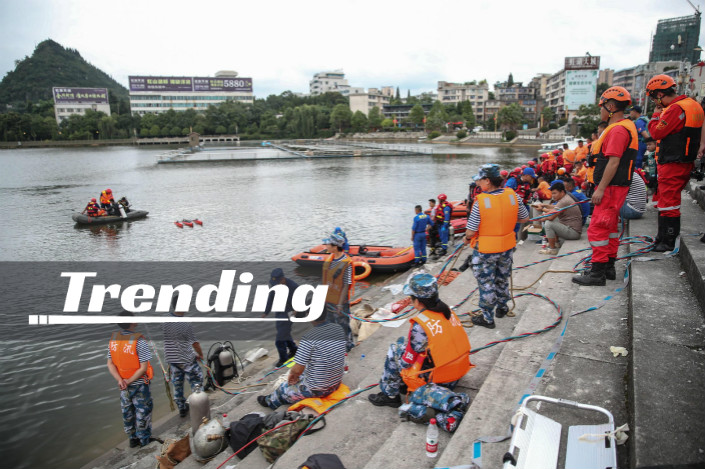 A bus plunged into a reservoir in Anshun, Guizhou on July 7, killing 21 people including the driver and injuring 15. The accident occurred on the first day of China’s college entrance exam this year and the victims included students who were taking the test. On Sunday, police investigations revealed that the driver had a high blood alcohol level, and had deliberately committed the act in anger after witnessing the demolition of his former house.

According to the police report, the 52-year-old bus driver surnamed Zhang was angry with the government approved demolition of his former apartment, rented from the factory at which he had previously worked. The structure became part of a “shanty town renovation project” in 2016, which led to its planned demolition.

Zhang then started living in an apartment rented from his niece and leased his former flat to another tenant. He signed an agreement with local housing authorities to receive over 72,000 yuan ($10,288) in compensation for the eventual demolition, but never claimed the money. He also applied for public housing, offered by the government at below-market rates to low-income workers, but his application was denied.

The investigation found that on the morning of July 7, Zhang returned to his former residential complex to see the house being demolished. He called a government hotline, complaining that the house should not have been destroyed before he was granted a new one. After asking a colleague to switch shifts with him, he got behind the wheels of the bus with a bottle of baijiu liquor, then called his girlfriend in a “world-weary mood.” The police report went on to say that he drank while waiting at a bus stop, shortly before picking up passengers and making a sharp left turn, intentionally driving the bus across five lanes into a reservoir at 12:12 pm, resulting in his own death and those of 20 passengers.

Although Zhang had permanent lease rights to his previous apartment, the property belonged to his employer. When houses are demolished to make way for redevelopment, enterprise-distributed housing is often the subject of disputes over compensation due to the tenant and to the owner. Local police said they will continue to investigate the demolition process and punish any wrongdoings accordingly. They concluded that Zhang was “fueled by personal dissatisfaction” and “committed an extreme crime that endangered public safety.”

The tragic incident has ignited intense discussion online as people mourn the innocent lives lost and blame the bus driver. “Why did he have to shift his personal pain over to so many innocent families?” one user wrote. Others condemned the driver for his reckless action and raised awareness of mental health problems in the service industry.

Meanwhile, hope is expressed that the incident can call attention to the plight of lower-income workers in order to prevent similar tragedies in the future. “The driver’s crime is horrific and evil. But I hope the police can provide more details about the demolition process, perhaps by disclosing the recording of Zhang’s phone call with housing authorities,” one user commented.