China’s $42 Billion Clean Energy Debt Is Only Getting Worse 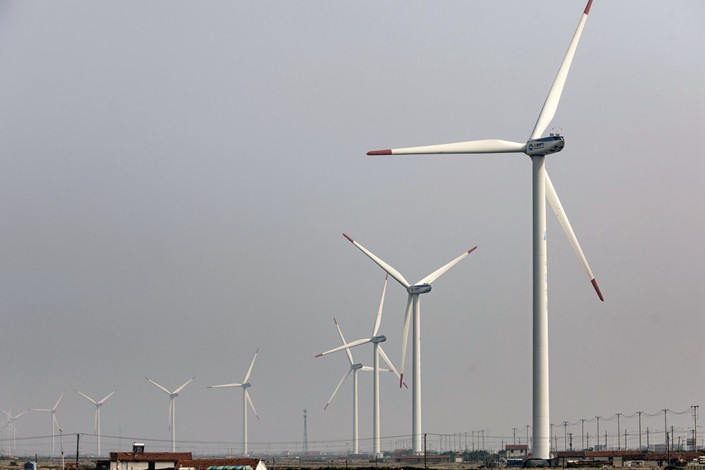 (Bloomberg) — China has used offers of generous subsidies to amass the world’s largest array of wind and solar power. But there’s a problem: it’s not fully paying them.

Renewable energy projects have grown far faster in recent years than the pool of money the government sets aside to pay the fees it promised them. The result is a total debt of $42 billion and growing, according to one analyst, with a payoff not seen until 2041 without a change in policy.

While China is moving away from subsidies for new projects, the delayed payments are weighing on developers and restricting their ability to borrow more money to fund new generation. The issue is of particular importance because of the huge amounts of money pouring into the sector in China — $818 billion in the last decade, more than double any other country, according to BloombergNEF.

“Without structural change to address the issue, the subsidy receivables in the whole industry would continue to grow and drag companies’ balance sheets and investment capabilities,” Tony Fei, an analyst with BOCI Research Ltd., said in a July 6 note.

China for several years now hasn’t been paying its full subsidy bill, and the mountain of debt keeps growing higher. The government funds the payments with a surcharge on electricity bills, and hasn’t been willing to increase that or find new sources as the number of subsidy-eligible wind and solar projects soared last decade.

Longyuan now trades below its book value because of the mounting delayed payments, said Robin Xiao, an analyst at CMB International Securities Ltd. Denmark’s Orsted A/S, another energy company with a large portfolio of wind assets, trades at nearly five times its book value, by comparison.

The low valuation for Longyuan and other the Chinese renewable firms restricts them from issuing more equity to fund new projects, Xiao said. That’s leading to a rash of privatizations on the Hong Kong Stock Exchange.

Other private developers, such as GCL New Energy Holdings Ltd., have had resort to selling off their renewable power assets to help reduce debt. Chinese state-owned developers, which have easier access to low-cost capital, are happy to snap up such projects, BloombergNEF analyst Jonathan Luan said.

China has been offering renewable subsidies since at least 2006, typically in the form of a promised payout for electricity generated over 20 years. The rates were higher than those for coal plants, and gave developers and banks confidence their investments in wind and solar installations would pay off.

Such early subsidies, also a major feature in markets like Germany, helped create the demand for solar panels and wind turbines that allowed manufacturers to build their economies of scale. Thanks to that virtuous cycle, wind and solar power is now cheaper than fossil fuel plants in many parts of the world.

“Without China’s subsidies, the renewable industry wouldn’t be in the position that it is today to compete with coal on price alone,” said BOCOM International Holdings Co. analyst Louis Sun.

Success came faster than anyone expected, and China’s wind and solar installations rose to almost 421 gigawatts as of the end of March, a more than four-fold increase from 2013, data from National Energy Administration show.

Subsidy budgets have lagged. For 2020, the Ministry of Finance boosted its budget for renewable power subsidies to 92.36 billion yuan this year, 7.5% more than it spent last year. That still falls far short of the 242.3 billion yuan required for this year alone by the projects already qualified for subsidies, according to BNEF’s Luan.

The Ministry of Finance, which is responsible for allocating the subsidies, didn’t reply to a faxed request seeking comment. China is currently looking to keep electricity prices low to aid a post-pandemic economic recovery, meaning an increase in the surcharge that funds subsidies is even less likely, Luan said.

For new projects, China is forcing renewables to compete against dominant coal power on price alone. Subsidies for onshore wind will be phased out after this year, with offshore wind following from 2022. The country has reduced benchmark solar power prices, including subsidies, by 91% since 2007, according to data from State Grid Corp. of China.

Still, cumulative subsidies owed by the government to wind and solar developers reached 293 billion yuan at the end of 2019, including projects under review, according to BOCI. If the government increases its subsidy budget by an average of 4% a year, the debt would continue grow to as much as 1.06 trillion yuan by 2032. The 20-year deals would start rolling off then, and China would be able to start making back payments, writing the final checks in 2041, according to BOCI.

Clean energy plants accounting for about 140 gigawatts, or a third of the total renewables fleet, are currently under review to be added to the subsidy list, Luan said. Those plants, which came online after March 2016, have so far been paid the same as coal-fired plants in their respective provinces, which is usually about half of what they would receive with subsidies.

China will prioritize full subsidy payments from this year’s budget to clean energy plants approved from 2019 and projects aimed at easing poverty, the National Renewable Energy Information Management Center said earlier this month. All other projects will receive about 30% to 50% of promised payments, it said.

The government needs to “solve overdue subsidies for existing projects,” said BOCOM’s Sun. “There’s no effective measure for now, and whether China can accelerate its pace to ease the issue may only depend on a recovery of the economy.”