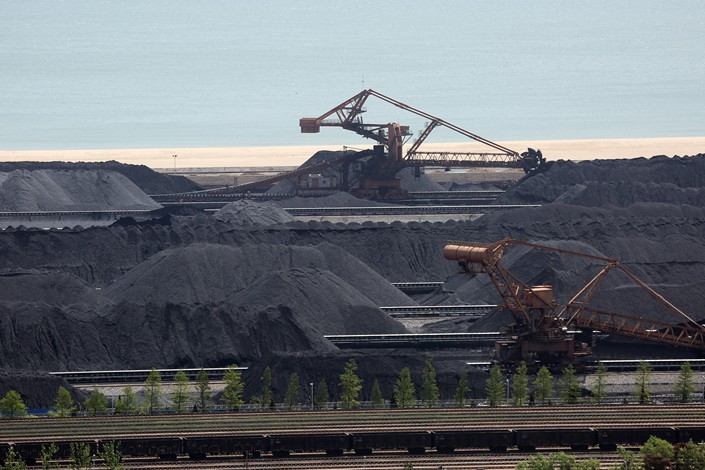 A coal storage yard in Rizhao, Shandong province, on May 18.

(AFR) — Chinese power generators are paying 60% more to buy coal from Chinese mines rather than from exporters such as Australia, highlighting how protectionism and geopolitical tensions are adding to the “pain” being felt across the Australian coal sector.

Thermal coal prices have more than halved over the past two years and Whitehaven Coal said on Tuesday that the murky outlook would prevent it from starting construction on new mines this year, even though industry downturns are typically the cheapest times to build new mines.

Whitehaven managing director Paul Flynn said the pain was particularly acute among those producing the type of coal Australia has traditionally sold to China, coal with energy content of 5,500 kilocalories per kilogram.

That type of coal is selling inside China for about $30 per ton more than it costs to mine and ship the same type of coal from New South Wales to China.

Despite the extra cost, Chinese generators continue to prefer Chinese coal to that produced in Australia.

Wood Mackenzie’s Asia Pacific head of coal, Rory Simington, said the prime motivation behind China’s domestic focus was to support its own coal companies and the workers they employed.

But in a reference to diplomatic tensions between China and Australia, he said political factors had also worked against Australian coal, with Chinese buyers preferring Russian and Indonesian product when they did buy imported coal.

Whitehaven is not a big player in the market for “5500” coal, but the prices it receives for its higher-quality coal are affected by fluctuations in the 5500 market, and Flynn suggested geopolitics could be at play.

“You can see the China price is actually quite high, so there is an obvious temptation to dip into the seaborne market and start pulling some coal out there, which would be an obvious motivation for them but for the geopolitical type machinations that I won’t even try to go into,” he said.

S&P Global Platts analyst Deepak Kannan said weaker than expected production by Chinese hydroelectric generators was also stoking demand for coal inside China, and that demand had combined with coal import limits to create the rally in coal prices inside China.

Shares in Whitehaven rose by 4% on Tuesday after the miner revealed it had beaten analysts’ forecasts for both production volumes and received prices over the past three months.

Record production volumes over the past three months gave Whitehaven some consolation after a disrupted year in which production slumped to a four-year low and coal sales slumped to a five-year low.

The company also built up its coal stockpiles over the past three months, suggesting coal sales could be stronger than normal in coming months.

Whitehaven’s flagship product is thermal coal with energy content above 6,000 kilocalories per kilogram, and benchmark prices for that product slumped by 13% to average $55 per tonne in the three months to June 30.

But Whitehaven received 7% better than that average price as customers paid a premium for the high-quality product that comes out of Whitehaven’s Maules Creek and Narrabri mines in New South Wales.

This story was originally published by the Australian Financial Review