Belt and Road Reemerges in Pakistan With Flurry of China Deals 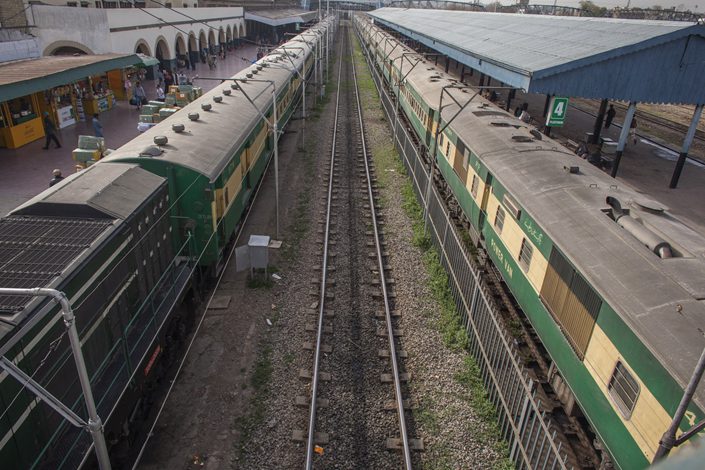 A Green Line Express train, operated by Pakistan Railways between Islamabad and Karachi, sits at a platform, left, next to a standard economy class train at Rawalpindi railway station in Rawalpind, Pakistan, on Feb. 22, 2018. Photo: Bloomberg

(Bloomberg) — China’s Belt and Road program has found new life in Pakistan with $11 billion worth of projects signed in the last month, driven by a former lieutenant general who has reinvigorated the infrastructure plan that’s been languishing since Prime Minister Imran Khan took office two years ago.

The nations signed deals on June 25 and July 6 for two hydropower generation projects costing $3.9 billion in the disputed Kashmir region, and another to revamp the South Asian nation’s colonial-era railways for $7.2 billion — the most expensive Chinese project yet in Pakistan.

Khan’s government appointed Asim Saleem Bajwa last year to run the China-Pakistan Economic Corridor Authority, which oversees more than $70 billion in projects from power plants to highways. He also joined Khan’s cabinet in late April, becoming one of more than a dozen former and current military officials in prominent government roles as the army expands its influence in the country.

The Chinese financing has helped rid Pakistan of an electricity deficit that left exporters unable to meet orders and major cities without electricity for much of the day. Still, the implementation of some investments appeared to stall since Khan came to power, with no new projects announced in 2018 and very few in 2019.

Since Chinese President Xi Jinping launched the initiative in 2013, the World Bank estimates about $575 billion worth of energy plants, railways, roads, ports and other projects have been built or are in the works across the globe.

“The reality is that much of CPEC, like the Belt and Road more broadly, has been paralyzed,” said Jonathan Hillman, a senior fellow at the Center for Strategic and International Studies in Washington, referring to the China-Pakistan Economic Corridor. Pakistan “is a flagship for China’s Belt and Road, so the need to show progress is even more important.”

In a tweet last month, Bajwa said some detractors had given the “false impression” that CPEC had been slowed. Not only has the pace of work on projects picked up recently, but a great deal of ground work has been done to launch phase two of the project that also includes special economic zones to lure Chinese manufacturers, agriculture, science, technology and tourism, he wrote.

“The prime minister pushed very hard on this,” said Abdul Razak Dawood, Khan’s adviser on commerce and investments said by phone. “We feel that we have to get more and more hydro in our energy mix.”

A spokesman in Bajwa’s office said he was not immediately available to comment.

Pakistan’s army is already responsible for securing every single Beijing-funded project scattered across the country, from the mountains near the Chinese border to the desert in Gwadar where the Chinese operate a port. Its role has become even more important following terrorist attacks on three Chinese-related projects in the past year.

“There is no doubt that PM Khan’s arrival slowed the pace of CPEC projects,” said Mosharraf Zaidi, a senior fellow at Islamabad-based think tank, Tabadlab, and a former principal advisor to the foreign ministry. “The renewed energy and approval we are now seeing is almost entirely likely due to the chairperson having settled in, and being added to Prime Minister Khan’s cabinet.”

Indeed there’s deepening concerns over Islamabad’s ability to service its debts under the program. The Center for Global Development has listed Pakistan among eight nations that face potential debt-sustainability problems because of the initiative. The country must repay China more than double the amount it owes the International Monetary Fund over the next three years, according to an IMF report last year.

For its part, Beijing says its projects in Pakistan had made major progress over the last six years. “China firmly supports the development of CPEC and stands ready to work with Pakistan,” China’s Foreign Ministry spokesperson Zhao Lijian told a regular press briefing in Beijing on July 7, adding that future cooperation will focus on social development, livelihood, industry and agriculture in addition to infrastructure construction.

The hydro projects are both based in Pakistan-administered Kashmir, a region at the heart of tensions with arch-rival India. The neighbors have fought three wars — two over Kashmir — and last year a terrorist attack in the Indian-controlled portion led to the most serious military escalation in more than a decade.

Several countries have run into trouble with Belt and Road projects or had to rework plans after complaints over corruption, padded contracts, heavy debt loads, environmental damage and a reliance on imported Chinese labor over local hires.

Pakistan renegotiated the project to revamp its British-era legacy railway system. It was initially estimated to cost $8.2 billion but that was reduced to $6.2 billion, according to the nation’s railways minister. The final amount is higher than the revised cost but still $1 billion less that initial estimate.

All three new projects have been under discussion for some time before this month’s announcement.

“Though these are difficult projects to get across the line compared to low hanging fruits like coal and LNG power projects that were announced at the start of the Chinese financing projects,” said Samiullah Tariq, head of research at Pakistan Kuwait Investment Company, “China is a critical ally for Pakistan to continue growing.”