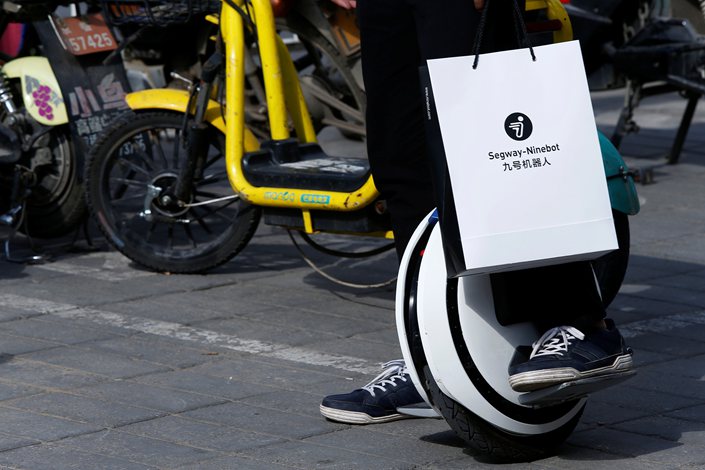 Registered in the Cayman Islands, Beijing-based Segway-Ninebot on Tuesday submitted an application for its IPO registration to the China Securities Regulatory Commission (CSRC), the main regulator of China’s securities industry.

According to the listing rules of the STAR Market, the regulator has 20 working days to approve or reject the IPO application. If approved, Segway-Ninebot will have up to 12 months to float shares on the sci-tech board of the Shanghai Stock Exchange (SSE).

If successful, Segway-Ninebot could become the first foreign-registered company with a variable-interest entity (VIE) structure to go public on the A-share market on the Chinese mainland.

VIE is a legal business structure in which an investor has a controlling interest despite not having a majority of voting rights. First adopted by internet companies such as Baidu and Sina, the structure enables investors to circumvent Beijing’s restrictions on foreign direct investment in certain industries including technology, media, and telecom.

Segway-Ninebot was created in 2015 after Beijing-based Ninebot acquired American personal-transporter manufacturer Segway. As one of the world’s largest suppliers of electric scooters, the company delivers products to clients that include Xiaomi, Amazon and California-based robotics firm Nuro.

The company plans to issue about 70.4 million Chinese depository receipts (CDRs) to its custodian bank, Industrial and Commercial Bank of China, which would then sell the CDRs at a ratio of 10 CDRs to one ordinary share, according to the company’s prospectus.

CDRs refer to shares of non-Chinese companies that trade on the Chinese mainland the same way that American depositary receipts allow non-U.S. companies’ shares to get listed on American exchanges.

According to the prospectus, Sequoia Capital China currently has a 16.8% stake in Segway-Ninebot. Chinese smartphone maker Xiaomi holds a 10.91% stake through an indirectly-controlled affiliate, while Shunwei Capital, led by Xiaomi founder Lei Jun and Tuck Lye Koh, owns 10.91%.

Segway-Ninebot applied for the listing as early as April 2019. The application was first cleared by the listing committee of the STAR Market on June 12.

The potential Segway-Ninebot IPO could become another landmark deal for the STAR Market, which serves as a testing ground for VIE structured as well as pre-profit companies.

The market, officially opened for trading just one year ago, has witnessed the IPOs of 140 companies with a combined market capitalization of 2.8 trillion yuan as of July 22, per official statistics.

Alibaba’s Ant Group on Monday announced its plan to list on the Hong Kong bourse and the STAR Market in what could be one of the world’s most sought-after IPOs.

This article was originally published by Deal Street Asia.