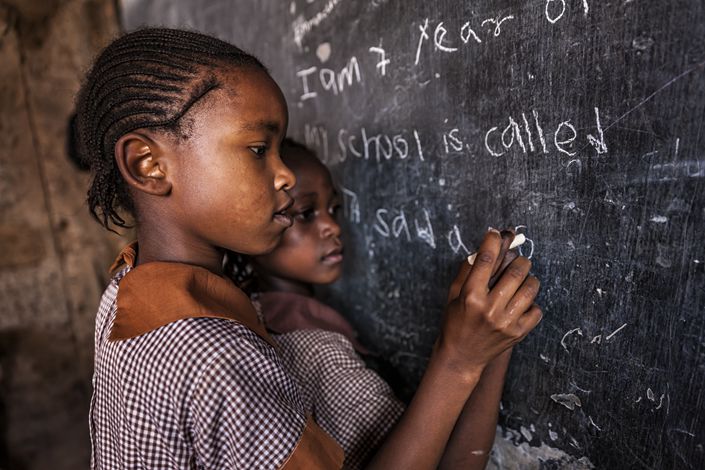 Covid-19 is now mutating into a global education emergency. Millions of children, especially the poorest and young girls, stand to lose the learning opportunities that could transform their lives.

Kevin Watkins is CEO of Save the Children UK.

“The beautiful thing about learning,” the great blues guitarist B.B. King once wrote, “is that no one can take it away from you.” Born and raised in poverty, King understood the value of education as a force for change. If only political leaders responding to the Covid-19 pandemic had an ounce of his insight.

Covid-19 is now mutating into a global education emergency. Millions of children, especially the poorest and young girls, stand to lose the learning opportunities that could transform their lives. Because education is so closely tied to future prosperity, job creation, and improved health, a setback on this scale would undermine countries’ progress, reinforcing already extreme inequalities. Yet this emergency has yet to register on the pandemic response agenda.

Lockdowns have shut more than 1 billion children out of school. For an estimated 500 million, that means receiving no education at all. A Save the Children survey in India found that two-thirds of children stopped all educational activity during lockdown. The danger now is that a perfect storm of lost schooling, increased child poverty, and deep budget cuts will lead to unprecedented reversals in education.

This is an emergency layered on a pre-existing crisis. Even before the pandemic, 258 million children were out of school, and progress toward universal education had stalled. Now, increased child poverty alone could result in ten million children not returning to school. Many of these children risk being forced into child labor or early marriage (in the case of adolescent girls). Meanwhile, already abysmal pre-pandemic learning levels, which left half of all children in developing countries unable to read a simple sentence by the end of primary school, are set to worsen.

Pathbreaking research on the impact of the 2005 earthquake in Kashmir, Pakistan captures the risk to learning. Schools were closed for three months. When they reopened, attendance quickly recovered. But four years later, children aged between three and 15 who lived closest to the fault line had lost the equivalent of 1.5 years of learning.

Imagining that outcome on a global scale gives a sense of what is at stake. Education empowers people, reduces poverty, and improves health, and the human capital that it generates shapes the destiny of countries. Lost education will erode that capital, effectively placing the 2030 Sustainable Development Goals beyond reach.

Governments should now be investing to prevent that outcome. Unfortunately, education budgets are being hollowed out by recession and the diversion of public spending — and international aid — to health care and economic recovery. As a result, governments in low- and middle-income countries could end up spending $77 billion less than planned on education over the next 18 months.

So, what can be done to avert disaster? In its new global Save Our Education campaign, Save the Children has set out a three-part agenda for recovery.

The first priority is to keep learning alive during lockdowns. Governments should do all they can to reach children through radio, TV, and remote-learning initiatives. Countries such as Ethiopia, Uganda, and Burkina Faso have developed ambitious national distance-learning programs. They and others need more donor support to implement them at scale.

Second, the pandemic creates an opportunity to address the wider learning crisis. Too many children are being taught at the wrong level, owing to schools’ rigid application of poorly designed curricula. Every child returning to school should undergo a learning assessment aimed at identifying those in need of support. Remedial teaching programs such as those pioneered by organizations like BRAC and Pratham can then prevent these children from falling further behind, thereby reducing the risk of future dropout.

Third, increased international financing is critical. Most of the world’s poorest countries, especially in Africa, entered the economic downturn with limited fiscal space. That room for maneuver is now shrinking further as recession bites and external-debt problems intensify.

Rich-country governments have responded to the Covid-19 crisis by tearing up their fiscal and monetary policy rulebooks and underwriting ambitious national recovery plans. They should be equally bold in supporting education in developing countries.

More effective leveraging of multilateral development bank balance sheets is an obvious starting place. The Education Commission has advocated establishing an International Finance Facility for Education to provide loan guarantees, thus enabling the World Bank and other institutions to borrow cheaply on international markets and lend the funds to developing countries. Every $1 of guarantees under this scheme could unlock $4 of financing for education. This approach, which would include rigorous debt-sustainability evaluations of recipient countries, could mobilize resources on a scale commensurate with the crisis. Aid donors and the World Bank should support it.

To its credit, the World Bank is front-loading resources already allocated to the International Development Association, its concessional lending arm. But an unprecedented crisis surely demands more than that. The World Bank should establish a supplementary IDA budget of at least $35 billion and step up its support for education.

Debt relief is another potential source of financing. The G-20’s Debt Service Suspension Initiative for IDA members (the world’s 73 poorest countries) is a small step in the right direction. Unfortunately, private and Chinese creditors, which account for over half of these countries’ debt-service payments (about $25 billion this year) have shown scant interest in participating. As a result, countries like Cameroon, Ethiopia, and Ghana are currently spending two or three times more on debt service than they do on primary education.

In effect, countries are meeting short-term debt payments by eroding long-term human capital. Allowing the claims of private creditors to rob children of their right to an education is morally indefensible and economically ruinous. That is why Save the Children has proposed a mechanism through which debt obligations can be converted into investments in children.

We can measure the health impact of Covid-19 on adults by tracking infection rates and deaths, and we can gauge its economic effects in terms of lost GDP, higher unemployment, and rising public debt. The education emergency is less visible to policymakers. But it will leave millions of the world’s poorest children carrying the scars of diminished opportunity for the rest of their lives. We can — and must — protect their future.