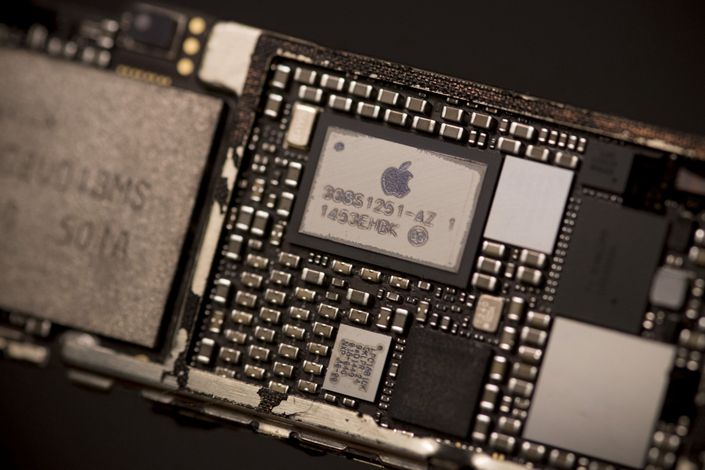 The Apple Inc. logo is seen on the power management supply integrated circuit (IC) chip mounted in the logic board of an iPhone 6 smartphone in an arranged photograph in Bangkok, Thailand, on Saturday, Feb. 3, 2018. Photo: Bloomberg

(Bloomberg) — Samsung Electronics Co. and Apple Inc.’s assembly partners are among 22 companies that have pledged 110 billion rupees ($1.5 billion) of investments to set up mobile phone manufacturing units in India.

Foxconn Technology Group, Wistron Corp. and Pegatron Corp., all iPhone assemblers, are among companies picked to make smartphones under a production-linked incentive plan, Ravi Shankar Prasad, minister for electronics and information technology, said at a press conference in New Delhi Saturday. The move could boost the value of phone output to 11.5 trillion rupees in the next five years, he said.

The incentives are aimed at encouraging global companies to shift their manufacturing beyond China after a pandemic-induced trade war put the focus on the risks to supply chains. The step is also part of Prime Minister Narendra Modi’s calls for a self-reliant India aimed at boosting local manufacturing and reducing dependence on imports.

“The move is not against any country but is India positive,” Prasad said. The aim is for India to become a big global player in the electronics manufacturing segment, he said.

The plan is expected to generate 300,000 direct jobs and 900,000 indirect jobs in the next five years. Indian companies including Dixon Technologies and Optiemus Electronics have also applied to take advantage of the incentive program. Companies that have submitted applications for component manufacturing include Ascent Circuits and Visicon, the government said in a statement.

As per the plan, the government is offering a financial incentive of as much as 6% on incremental sales of goods made in the country for a period of five years. It also promises that an incentive of 25% on capital expenditure will be provided for production of electronic components, semiconductors and other parts.