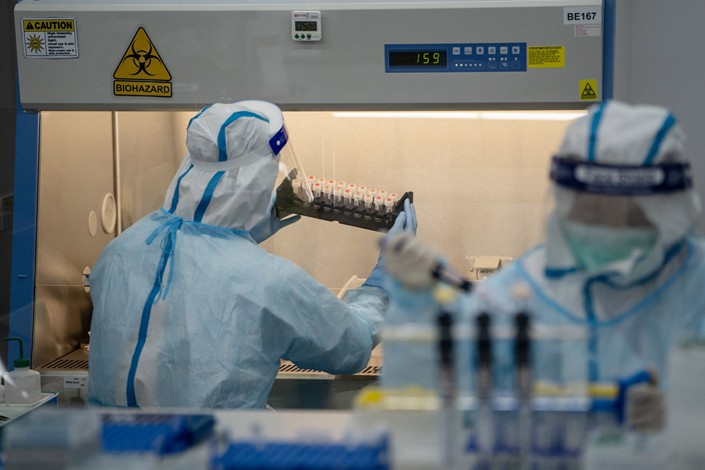 (Bloomberg) — China aims to boost Hong Kong’s coronavirus testing capacity to 20 times its current ability, said the leader of a support team sent from neighboring Guangdong province to aid the city in its worst outbreak ever.

The testing team of about 60 people will work with the Hong Kong government and three Chinese mainland testing companies to process 100,000 to 200,000 samples every day, health official Yu Dewen said in a state media video interview released on Monday.

“Our main mission is to help the Hong Kong government conduct testing on a large scale for the population,” said Yu, who is an official with Guangdong’s health commission. Yu also led the Guangdong delegation earlier sent to help Wuhan, the central Chinese city where the virus first emerged last year.

“Hong Kong’s public institutions can only run about 10,000 tests a day, which is far from enough to meet the needs of epidemic prevention,” he said.

The Asian financial center has been battling a fierce resurgence over the past month and its health care infrastructure and testing capacity has quickly come under strain, with isolation beds and wards in public hospitals nearing their limits. The death toll in Hong Kong has also jumped as the new wave infects older people compared to previous outbreaks.

Data from the government show that city authorities have performed around 250,000 tests over the first 28 days of July, averaging less than 9,000 daily. Other places facing resurgences, like the Australian state of Victoria, are testing at over twice that pace.

In the interview, Yu didn’t give any details on how the testing would work and whether it would be mandatory — something Hong Kong’s government also hasn’t clarified.

State broadcaster CCTV reported on Saturday that all 7.5 million Hong Kong residents will receive free virus testing, without citing sources. The report also estimated the testing could be completed within “a few days,” though no public information has been released on how any testing drive will be conducted.

China has built up an enormous testing capacity — officials said the nation can process nearly 4 million samples daily now — and has used rapid testing to curb resurgences in Wuhan, Beijing and the northeastern city of Dalian.

“We have a lot of experience in large-scale testing from the mainland. We shared our experience with Hong Kong,” Yu said. “We supported Wuhan, supported Beijing. We are very confident we can finish this task nicely.”

Hong Kong on Tuesday reported 75 local coronavirus cases, the second day of new infections falling below a hundred. About half of the new local cases — 32 — are of unknown origin.