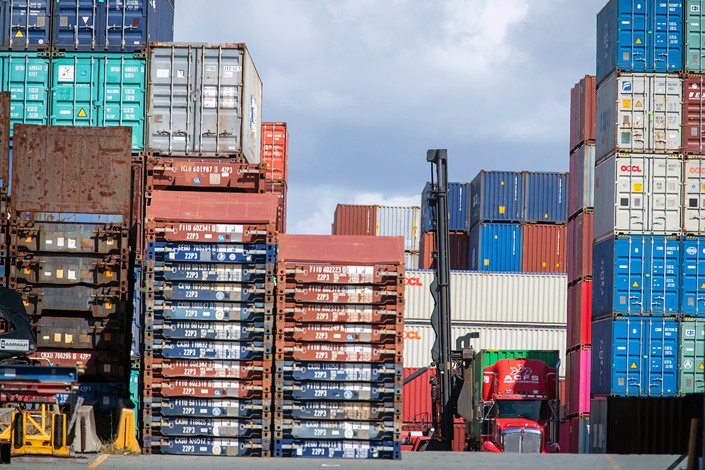 (AFR) — China’s share of Australian exports have reached an all-time high, rising to 48.8% and driving the 30th consecutive monthly trade surplus to A$8.2 billion ($5.8 billion).

Official figures showed the exports to China — mainly due to iron ore, especially in the June quarter — reached a record A$14.6 billion. Goods exports to China are now worth around 8.5% of Australia’s GDP.

Rural exports also lifted after the fall in May, rising 3.6% in June with wool exports surging. China is the largest market for Australia’s wool, with upwards of 90% of Australian wool being exported to China.

The surge in exports to China helped Australia record its largest financial year trade surplus of A$77.4 billion.

As a share of GDP, NAB estimates that the June quarter trade balance was worth 5% of GDP, up from the March quarter’s 3.8%.

Strickland said the trade balance could add around 1.25 percentage points to overall June quarter GDP. The June quarter is usually strong for commodity exports, but Australian producers have also benefited from supply disruptions in Brazil over recent months.

Service exports dropped 30% over the quarter to A$17 billion — the lowest quarterly figure since 2015. However service exports in the month of June alone rebounded up 4.2%, driven almost entirely by a rise in travel service exports.

Trade Minister Simon Birmingham said that despite the record goods trade he recognized the significant fall in service exports.

“We also recognise the current COVID-19 crisis continues to place immense pressure on parts of our services sector, including tourism and education businesses, many of whom felt the earliest and deepest aspects of the economic downturn.

“That is why our government has taken significant steps to support businesses and jobs across the tourism sector through cash payments of up to A$100,000 and the extension of the JobKeeper payment until the end of March next year.”

The ABS reported that categories which include education were not yet available for collection. The ABS also did not provide a breakdown of the data by country.

One of the bright spots was some recovery in imports which can signal higher domestic consumption activity.

Consumption imports were up 7.2% in June almost reversing the fall in May.

“With the further lockdown in Melbourne, the recovery in consumption imports may be short lived though,” ANZ’s Hayden Dimes said.

“While we welcome the resilient international trade and confirmation of the solid preliminary June retail trade data, they are now largely academic in nature,” Williamson said.

This story was originally published by Australian Financial Review