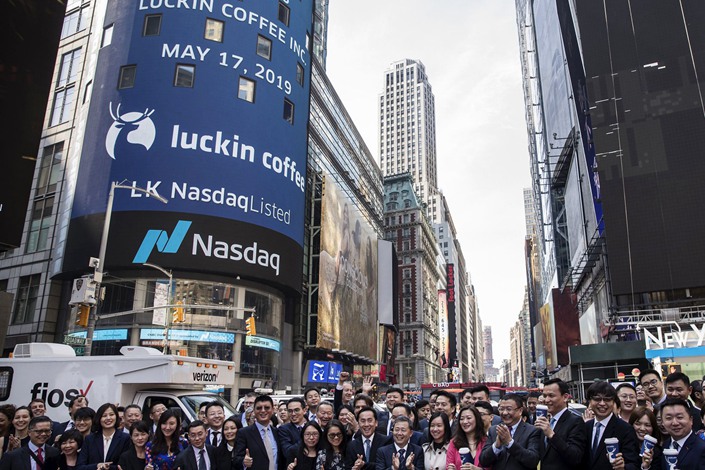 Luckin Coffee's IPO outside the Nasdaq MarketSite in New York in 2019. Photo: Bloomberg

(Bloomberg) — A high-powered group of U.S. regulators said stock exchanges should set new rules that could trigger the delisting of Chinese companies, following mounting concerns that investors are being exposed to fraud.

The President’s Working Group on Financial Markets said Thursday that in order to trade on a U.S. exchange, companies must grant American regulators access to their audit work papers. The group hasn’t determined how to enforce the guidelines, said a senior Treasury Department official who briefed reporters on the condition of anonymity. While the final penalty would be removal from U.S. exchanges, the Treasury and Securities and Exchange Commission would establish how binding the mandate is in implementing the rules.

The recommendations target a problem that has vexed U.S. regulators for more than a decade: China’s refusal to allow inspectors from the Public Company Accounting Oversight Board to review audits of Alibaba Group Holding Ltd., Baidu Inc. and other firms that trade on American markets. The issue has gained added urgency due to rising tensions between Washington and Beijing and following this year’s high-profile accounting scandal at Luckin Coffee Inc.

The group of regulators, which includes the Federal Reserve chair, made the recommendations unanimously, Treasury Secretary Steven Mnuchin said in a statement. Other suggestions include requiring “enhanced and prominent” disclosures by public companies of the risks tied to investing in China and new reports from fund managers about their exposure to such companies.

“The recommendations outlined in the report will increase investor protection and level the playing field for all companies listed on U.S. exchanges,” Mnuchin said.

China’s accounting firms, including affiliates of giants like Deloitte, Ernst & Young, PwC and KPMG, have long argued that Chinese law bars them from sharing audit work papers with the PCAOB on the grounds that the documents may contain state secrets.

The President’s Working Group addresses that concern by advising a co-audit for companies that are unable to comply with U.S. rules. The co-audit would be performed by an accounting firm that the PCAOB determines has sufficient access to the audit work papers.

In its report, the group acknowledged that Chinese companies could just bypass any new U.S. rules by listing their shares in jurisdictions such as Hong Kong, Shanghai or London.

“U.S. investors could purchase such securities on foreign exchanges, and these purchases may be subject to fewer investor protections than in the United States,” the regulators said in the report.

The issue of Chinese stock listings has attracted the attention of President Donald Trump, who has ratcheted up his attacks on China over the coronavirus pandemic and as friction mounts due to Beijing’s recent moves that chip away at Hong Kong’s political freedoms. In June, Trump asked for recommendations from the President’s Working Group on how to fix the problem.

Currently listed Chinese companies would have until Jan. 1, 2022, to come into compliance, while firms seeking a new listing will need to adhere to the new rules, the President’s Working Group said. The specific regulations are still to be written, officials told reporters Thursday.

SEC Chair Jay Clayton said in a statement that the recommendations are “common-sense” and that he plans to work with regulators to implement them.

In a statement, the New York Stock Exchange said its listing requirements have long balanced investor protections with providing “the broadest possible range of public-market investments.” It said any new rules should “maintain that balance.”

Relations between the world’s two largest economies have further deteriorated in recent weeks. Trump has threatened to ban Chinese music video app TikTok from the U.S. market over national security concerns unless an American company buys it by Sept. 15.

Secretary of State Michael Pompeo this week urged American companies to bar Chinese applications from their app stores, signaling that U.S. efforts to banish Chinese technology from U.S. computers and smartphones will extend well beyond the push to force a sale or shutdown of TikTok.

Bipartisan legislation that would require more transparency from Chinese companies’ audits is moving through Congress. The bill would give firms three years to comply with U.S. auditing standards before they would get delisted from American exchanges.

Luckin in particular has shined a spotlight on the risks of Chinese companies. Since reaching a high of $50 a share in January, the coffee chain has cratered more than 90% in Nasdaq trading. Following an internal investigation, Luckin disclosed that fabricated transactions had inflated its 2019 revenue by about $300 million.