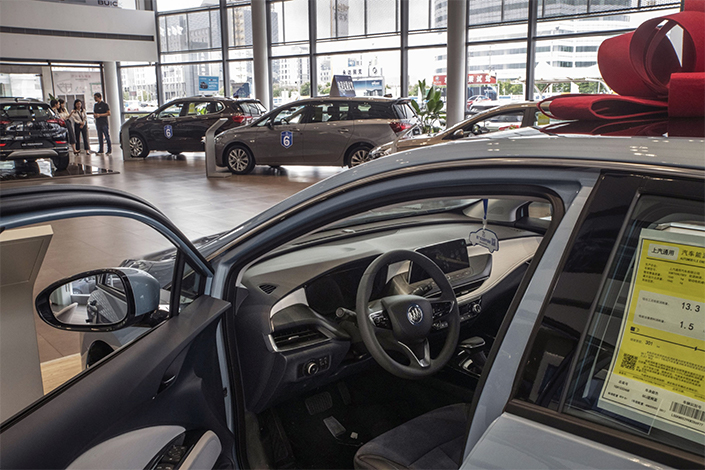 (Bloomberg) — A recovery in China’s car sales accelerated last month, signaling the world’s biggest auto market is emerging from a two-year slump as the economy improves and pandemic restrictions ease.

Retail sales of sedans, SUVs, minivans and multipurpose vehicles increased 7.9% in July from a year earlier to 1.63 million units, the China Passenger Car Association said Tuesday. The sales trend had been improving on a monthly basis since March before a 6.5% drop in June. Tesla Inc. and BYD Co. led the way in electric-car sales last month.

The car industry is betting that the reopening of showrooms and malls as the coronavirus pandemic eases in China will lead to a sustained increase in demand. The outbreak exacerbated a slump brought about by a slowing economy, trade tensions with the U.S. and stricter environmental standards.

Yet challenges remain: the economy is still recuperating, and new technologies such as electrified motors may be prompting some buyers to put off purchase decisions until more models with such features have come out. China’s gross domestic product expanded 3.2% in the three months to June from a year earlier, following a 6.8% decline in the first quarter.

Car wholesales rose 8.5% from July last year to 1.67 million units, the China Association of Automobile Manufacturers said separately. That implies an increase in inventories, suggesting that sell-through to consumers hasn’t been as strong as sales from manufacturers to dealerships.

Investors have been encouraged by the uptick in sales. Shares of China market leader Volkswagen AG have risen more than 40% from a mid-March low, while challenger General Motors Co. is up more than 60% over that span. Local contender Geely Automobile Holdings Ltd. is up almost 60% and peer Brilliance China Automotive Holdings Ltd., a partner of BMW AG, has added about 70%.

German and Japanese brands will benefit the most from improving demand as consumers trade up, said Steve Man, an analyst at Bloomberg Intelligence in Hong Kong. GM and Ford Motor Co. may get hit by escalating tensions between China and the U.S., he said.

Wholesales of new-energy vehicles, consisting of pure electric cars, plug-in hybrids and fuel-cell autos, advanced for the first time this year, rising 19% in July from a year earlier to 98,000 units, CAAM said.

Tesla, which started deliveries from its massive new Shanghai factory around the start of 2020, has quickly grabbed market leadership in pure electric vehicles and been a rare example of a EV maker boosting monthly registrations this year. Tesla sold 11,014 autos last month in China and kept its top spot in battery-powered cars, PCA said.

BYD ranked No. 1 in total NEV sales in July with about 14,000 units, PCA said. The company, backed by Warren Buffett’s Berkshire Hathaway Inc., was helped by sales of both pure electric cars as well as plug-in hybrids, which also use gasoline.

Sales of NEVs are set to reach 1.1 million units this year in the country, with Tesla accounting for about 100,000, CAAM forecast. That compares with NEV wholesales of 1.21 million units in 2019, according to data from CAAM.