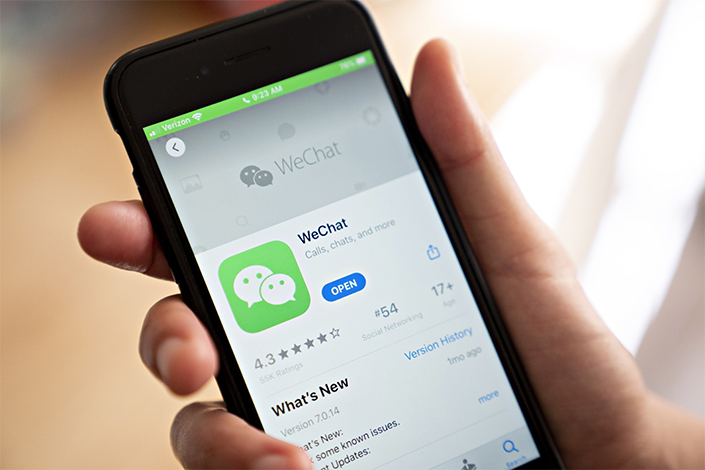 (Bloomberg) -- U.S. President Donald Trump’s order to ban Chinese social media app WeChat may not have resonated with many Americans who are used to Facebook, Instagram and Twitter to keep in touch with family. But for millions of people with family or business in China, the move has personal consequences.

Johnnie Yu a 20-year-old student at New York University where he’s the incoming co-president of the Chinese Student Society, chats with his parents in China every day on the messaging platform. When Yu heard about the ban, he began thinking of different ways to communicate with them but came up short. In China, most other messaging services that are popular in the U.S. are prohibited.

“It’s going to be very difficult chatting with my parents because I’m thinking of what other apps they use,” Yu said. “Facebook is blocked by the firewall, Telegram is blocked too, so we’re exploring the alternatives.”

Yu is just one of WeChat’s more than 1 billion users globally. The app, owned by Tencent Holdings Ltd., is more than just a messaging service. It’s used for online payments, for food and metro fare and is a staple of personal and business communication in China. Yu’s parents, who work in investment banking and real estate, use the platform for their jobs.

WeChat has about 19 million daily active users in the U.S., according to analytics firm Apptopia. For some, the app is a way to stay connected to the elderly in the U.S. and abroad. “Young activists and community organizations led by Asian Americans also use WeChat to engage our elder and immigrant communities, since the translation tool is helpful for overcoming language barriers,” said Joyce Chang, a WeChat user from New York. “WeChat is the dominant tool that our older generation uses, and losing it would also be a loss of a bridge we use to connect with them.”

A feature of the app allows users to translate messages in real time, according to its description on Apple Inc.’s App Store.

Trump’s order, which also ensnared ByteDance Ltd.’s popular social media app TikTok, is an escalation of the U.S.’s aggressive stance against Chinese technology companies. The Trump administration has claimed that the apps pose a national security risk since the data they collect on U.S. citizens could potentially be turned over to the Chinese government. Microsoft Corp. is in talks to acquire TikTok’s operations in the U.S., Canada, Australia and New Zealand in order to allow it to continue to operate in the U.S.

Some users said Trump’s actions against WeChat and other Chinese apps are unjustified. “This attempt to leverage technology to wage a tech war with China is frustrating and a huge distraction from his lack of efforts with the pandemic in the United States,” said Shirley Wu, a designer and WeChat user from San Francisco. Wu said she already has been unable to visit family members in Hong Kong for an annual visit. “Now I feel like my connection with some folks in my family may get cut off until we figure out other applications we can use.”

Yu might also have to come up with a plan B. Microsoft, for example, is one of the few U.S. companies that still has apps allowed in China, such as Skype and LinkedIn, though they are censored versions.

“I have so many relatives that I keep in touch with perhaps once a year and it might not occur to them or to me that I’ll have to get them on other platforms,” he said.