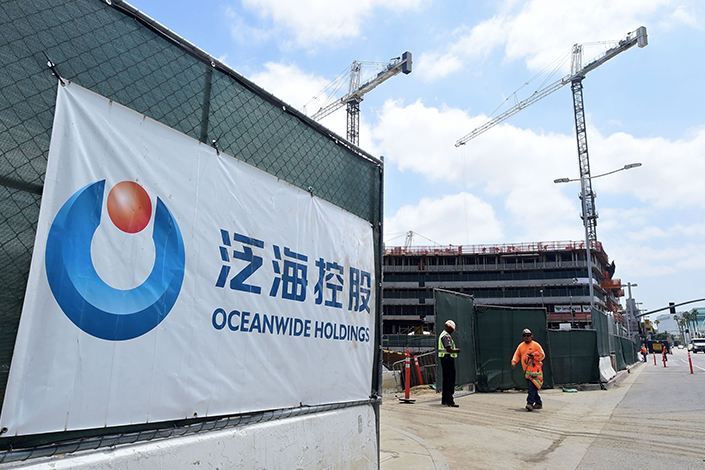 A banner of China's Oceanwide Real Estate Group is displayed at the construction site of a property, purchased in 2014, located across the steet from the Staples Center in Los Angeles, California on May 17, 2016. Photo: Bloomberg

(Bloomberg) — One of the last remaining deals of China’s now-aborted overseas acquisition spree is about to make its last attempt to limp across the finish line.

China Oceanwide Holdings Group Co., backed by property tycoon Lu Zhiqiang, agreed in October 2016 to take over Genworth Financial Inc. for $2.7 billion. The idea was to give Richmond, Virginia-based Genworth a much-needed injection of capital, while providing the Chinese company a platform for further global expansion and expertise it could bring back home.

It was just one of the ambitious deals announced that year by Chinese companies, which agreed to buy $235 billion of overseas assets ranging from Hollywood film studios to trophy hotel properties. Nearly 1,400 days later, the transaction is still dragging on and Genworth shares closed Monday at 51% below the bid price.

The deadline for Oceanwide’s proposed purchase has been extended 15 times, and it’s now been pending longer than any other takeover in the U.S. valued at $1 billion or more, according to data compiled by Bloomberg. Genworth investors will soon find out whether the deal will die.

“The Genworth saga — all 3 3/4 years of it — is unique not only given the length of time that has elapsed since the two sides agreed to the deal, but also because of the twists and turns that have occurred along the way,” said Mark Palmer, an analyst at BTIG LLC with a “neutral” rating on the stock.

When the deal was first announced, it looked like regulators would be the biggest hurdles. Government watchdogs asked questions about protecting customer data. A national-security review was extended, requiring the Chinese suitor to refile its application multiple times. The whole process took so long, some regulators had to review the transaction twice, as initial approvals expired without the deal closing.

Now it’s a question of whether Oceanwide can stump up the money. As the deal dragged on, Oceanwide ran into new limits from the Chinese government on the amount of funds that can be taken out of the country. It has also experienced its own financial difficulties. Then came the coronavirus pandemic, prompting Oceanwide to seek extra time to finalize its financing.

While Genworth management have said they’re committed to closing the deal, they’ve also started preparing Plan B: a potential listing of the company’s U.S. mortgage insurance unit. Under the latest extension agreement, Oceanwide has until the end of September to close the deal and needs to show evidence by Aug. 31 that it’s got access to the funds it needs.

Investors remain skeptical that Oceanwide will be able to raise the financing, said Aaron Glick, a special situations analyst at Cowen Inc. A price cut isn’t out of the question and “may ultimately be the most logical outcome,” Glick said.

For his part, Oceanwide’s Lu said last month he is determined to see the “strategically important” deal through. Representatives for Oceanwide and Hony Capital, the Chinese private equity firm that’s in talks to provide debt funding, didn’t immediately respond to requests for comment.

A spokeswoman for Genworth said the need to seek clearance from five countries and six states was the main reason for the delays. When final approvals were received in March, the coronavirus pandemic had spread around the world, which has affected many deals, she said. The company will provide updates on the transaction “in due course,” she said.

Genworth’s options are limited because of the potential downsides from its long-term care insurance business, according to BTIG’s Palmer. The company is worth significantly less than Oceanwide’s bid on a sum-of-the-parts basis, so the Chinese takeover offer remains the best option for Genworth shareholders, he said.

“Genworth has been willing to pursue the deal so long because the alternative of going it alone is unattractive,” Palmer said. “They are willing to play this to the end, one way or the other.”