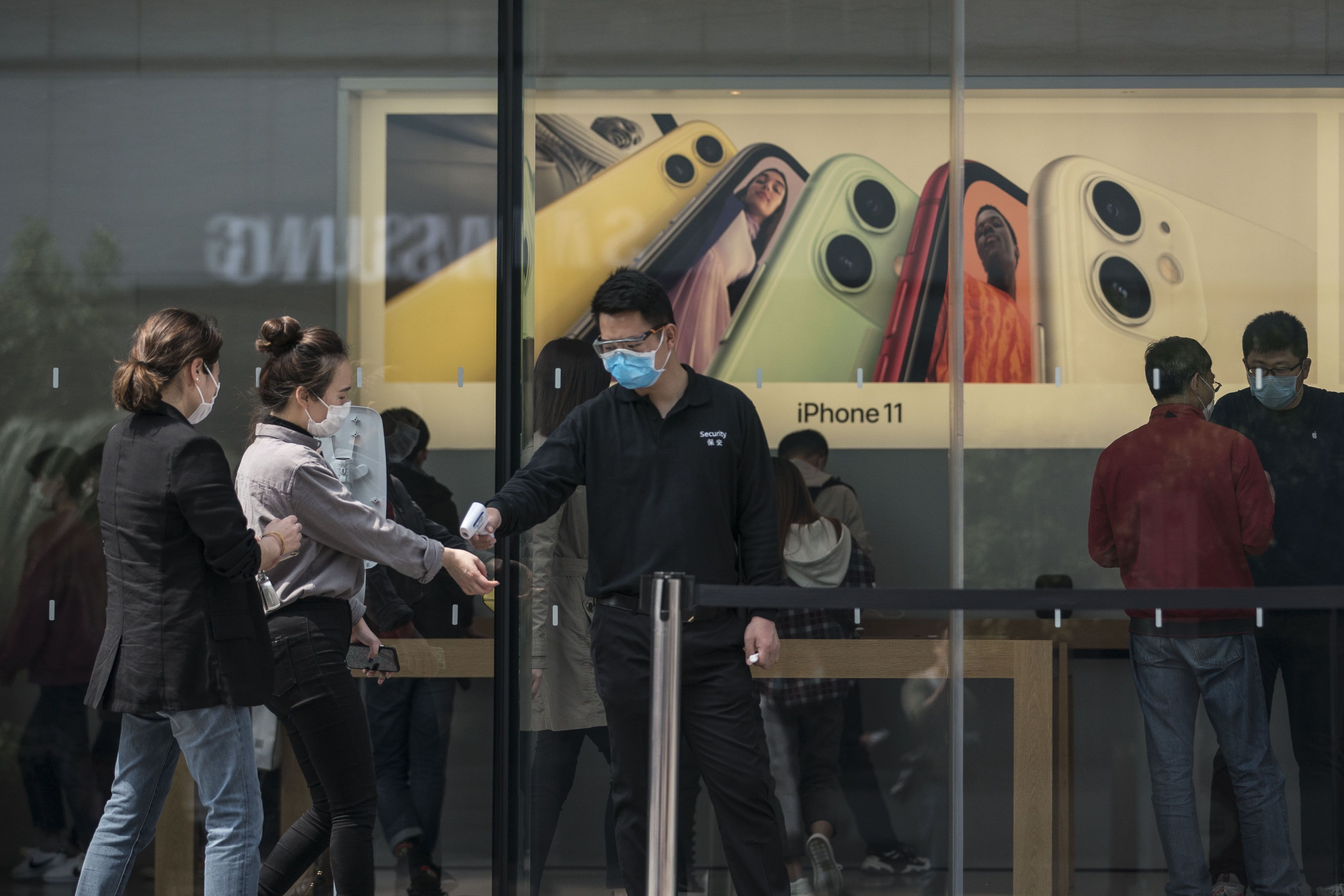 An employee wearing a protective mask checks the temperature of customers outside an Apple Inc. store in Shanghai on April 20. Photo: Bloomberg

(Bloomberg) — A key supplier to Apple Inc. and a dozen other tech giants plans to split its supply chain between the Chinese market and the U.S., declaring that China’s time as factory to the world is finished because of the trade war.

Hon Hai Precision Industry Co. Chairman Young Liu said it’s gradually adding more capacity outside of China, the main base of production for gadgets from iPhones to Dell desktops and Nintendo Switches. The proportion outside the country is now at 30%, up from 25% last June.

That ratio will rise as the company — known also as Foxconn — moves more manufacturing to Southeast Asia and other regions to avoid escalating tariffs on Chinese-made goods headed to U.S. markets, Liu told reporters after his company reported financial results.

“No matter if it’s India, Southeast Asia or the Americas, there will be a manufacturing ecosystem in each,” Liu said, adding that while China will still play a key role in Foxconn’s manufacturing empire, the country’s “days as the world’s factory are done.”

Intensifying trade tensions between Washington and Beijing have pushed device manufacturers to diversify their production bases away from China, and Liu last year said that Apple’s most prized product, the iPhone, can be made outside China if needed. The two nations remain in trade talks, but Liu’s comments affirm a growing expectation that the China-centric electronics supply chain will fragment over the longer term.

The Taiwan company reported better-than-expected net income of NT$22.9 billion ($778 million) for the quarter ended in June, boosted by increased demand for iPads and MacBooks. Revenue was NT$1.13 trillion, but Hon Hai warned it expects its third-quarter sales will be down by double digits relative to 2019 as Apple delays its iPhone launch this year.

Hon Hai is bouncing back from a record profit slump in the first quarter as production at its factories recovered and shelter-in-place orders spurred demand for home computing equipment. The pandemic likely boosted iPad and Mac sales, even as Apple store closures weighed on iPhone sales, Apple CEO Tim Cook said on July 31 after reporting quarterly revenue that crushed estimates. Apple accounts for half of Hon Hai’s sales.

Even as Apple outperformed, Hon Hai’s other customers have fared less well. Hong Kong-listed subsidiary FIH Mobile Ltd. said in its Aug. 7 earnings release that while Huawei Technologies Co.’s new phones have been popular in China, they missed expectations elsewhere following U.S. sanctions. Another key customer Xiaomi Corp. suffered a backlash in the Indian market amid growing tensions between China and the South Asian country. FIH lost $100 million in the first half.

Foxconn has been shaking up its traditionally China-focused operations. Hon Hai is among Apple assembly partners that plan to expand operations in India, potentially helping the iPhone maker grow its presence in the country of 1.3 billion and shift some of the U.S. company’s supply chain outside of China as ties between Washington and Beijing fray.

Foxconn will work on its component business to maintain tech leadership and it also benefits from its long-term relationship with Apple, Liu said in response to several analysts’ questions about Foxconn’s competitive strategy against the rising Chinese supplier.