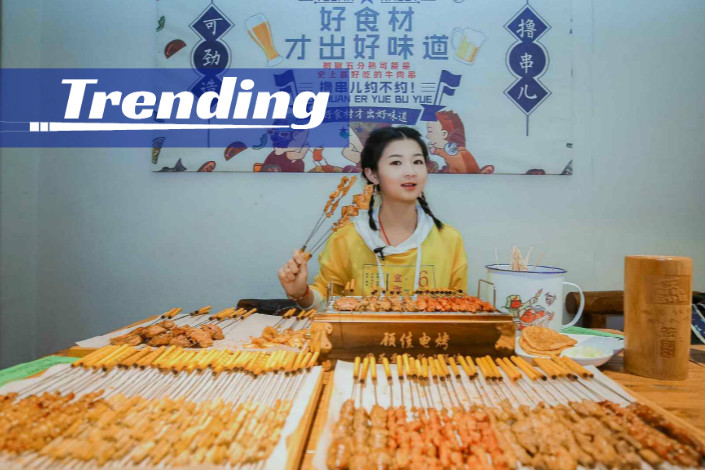 China’s state media has been urging people to reduce food waste by asking restaurants to offer smaller portions and host banquets less frequently. Most recently, CCTV hit out at the livestreaming culture known as “mukbang” — where hosts consume large amounts of food while interacting with viewers — accusing it of being wasteful.

Imported from South Korea in recent years, “mukbang” or eating shows have rapidly gained popularity in China, with top hosts earning millions of yuan per year. Viewers enjoy watching competitive eaters devour mountains of food to stimulate their own appetites, relieve stress and anxiety, or entertain themselves when eating alone, according to China National Radio. While an increasing number of livestreamers are dipping their toes into the culture, lured by the fun and wealth that it seems to provide, some have emerged from the competitive industry with chronic health problems, and it has also been linked to eating disorders.

Now, state broadcaster CCTV has attempted to draw a link between mukbang and world hunger. In a Weibo post, it somberly quoted United Nations statistics showing one in nine people globally go hungry, saying meanwhile “certain so-called ‘big stomach’ livestreamers are wasting an incredible amount of food,” and even vomiting after their meals. CCTV also criticized people and restaurants that waste food at banquets and buffets.

The problem of food waste is being brought to people’s attention around the nation. On Tuesday, Wuhan authorities recommended that all restaurants in the city offer options of small or half portions. Patrons will be encouraged to order dishes by subtracting one from the number of diners. Livestreaming platforms have felt the scrutiny from the public and the media, with Douyu announcing that it will implement more rigorous review procedures for future eating shows.

Internet users have pushed back, asking whether state media should interfere at all in commercial events like mukbangs. Some people believe that, without proper regulation, eating shows encourage food waste and excessive unhealthy consumption, while others find the shows entertaining and argue that hosts should be able to pursue their interests with their own money.

Some are alarmed by the state media’s sudden, aggressive emphasis on frugal eating. “Could they be implicitly warning us about possible food shortages brought on by the pandemic?” one user wrote.