Luxshare Grows Into China’s iPhone Champion With Help From Apple 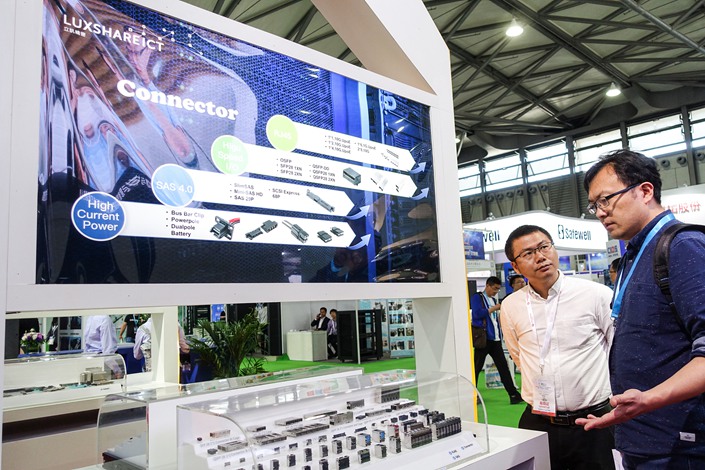 The Luxshare booth at an electronics trade show in Shanghai in May 2018.

(Nikkei Asian Review) — Even during the years of Foxconn’s eminence as the biggest piece of Apple’s global supply chain, executives of the Taiwan company always kept an eye on a little-known Chinese supplier: Luxshare-ICT.

Luxshare was barely a dot on the horizon. But savvy Foxconn executives saw a company cut from the same cloth as their own — not least because it was started by Grace Wang, a former employee of a Foxconn affiliate whose style echoed that of their own founder Terry Gou. They believed it could grow into a formidable rival.

“We’ve been monitoring Luxshare for years. Grace Wang’s personal traits share some similarities with Terry — she has a very strong will of execution, she learns fast, and her team is very ambitious and competitive,” said an executive at Foxconn.

Those instincts were right. Luxshare, founded in 2004 and sometimes known as a “little Foxconn,” is hunting its rival with a growth rate and acquisition plans that are shaking up one of the world’s most important industrial supply chains.

Luxshare’s revenues have risen fivefold to 62.09 billion yuan ($8.89 billion) in five years, after it won more business from Apple and other Big Tech names including Microsoft, Google, Amazon, HP and Dell. And Luxshare’s market capitalization has skyrocketed to around 375.1 billion yuan — not lost on Foxconn, formally known as Hon Hai Precision Industry.

The next stage of Luxshare’s development is now at hand. The company, formally traded as Luxshare Precision Industry, signed a 3.3 billion yuan deal in July to acquire an iPhone production factory in China from Wistron, the smallest of a trio of Taiwan-based iPhone assemblers alongside Foxconn and Pegatron.

While Luxshare has supplied iPhone components, the move takes it for the first time into the more complex task of assembling the iconic, highly engineered consumer gadget. At the same time, it ends decades of dominance by Taiwan companies in iPhone manufacturing.

Nor is Luxshare stopping there. It is in talks over further acquisitions with other tech suppliers and could reach deals in the next few months, three people familiar with the matter said. That could broaden its market presence and deepen its relations with Apple, which already accounts for more than 50% of its revenue.

Apple has blessed Luxshare with more than just its business. Apple CEO Tim Cook in December 2017 visited Luxshare’s AirPods facility and praised company founder Wang as the “realization of a Chinese dream.”

Apple’s interest in Luxshare shows how important China is for the U.S. tech group at a time tension between Beijing and Washington risks fragmenting global supply chains — as Foxconn’s Liu acknowledged this week. Apple derives nearly 20% of its revenues from the Chinese market.

While Apple has asked many of its non-Chinese suppliers to help its diversification plans outside China amid the escalating geopolitical tension, Luxshare has become the iPhone-maker’s top choice to secure a loyal and complete local supply chain inside the world’s second-largest economy.

“Apple is fully aware of Luxshare’s negotiations with the other Apple suppliers and all these moves are with the biggest U.S. client’s consent,” said an industry executive familiar with the matter. “It’s clear that Apple wants Luxshare to play a more important role in its supply chain in China amid the Washington-Beijing tensions.” Apple did not respond to Nikkei’s request for comment.

While Luxshare’s production facilities are mainly in China it has also responded to Apple’s call to allocate production outside China amid the escalating Washington-Beijing trade war. Luxshare built factories in northern Vietnam for Apple’s AirPods lineup in 2019, just a 15-minute drive from Foxconn’s facility there, Nikkei learned. Luxshare also set up a joint venture with acoustic component Merry Electronics in central Vietnam to produce acoustic components.

But while Luxshare is a way for Apple to gain bargaining power with other suppliers, it is also central to Beijing’s tech ambitions.

In addition to the China Integrated Circuit Industry Investment Fund, nicknamed the “Big Fund,” to back the country’s semiconductor industry, Beijing in late 2019 also established a 147.2 billion yuan fund to upgrade the nation’s manufacturing capability. Luxshare, which shoulders Beijing’s hope of becoming a “Chinese version of Foxconn,” is one of the key companies to receive such government subsidies, multiple sources told Nikkei.

Chinese President Xi Jinping on July 21 chaired a symposium with entrepreneurs from stake-backed, private and foreign companies, which Luxshare’s Wang attended, according to the company’s official WeChat account

But as Luxshare grows, so do the geopolitical risks it faces.

Like Foxconn, founded by Gou in 1974, Luxshare has expanded by investing in various component makers, especially in Apple suppliers, ranging from connectors to camera modules and acoustic components — to broaden its portfolio and forge a deeper engagement with the U.S. tech giant.

Ahead of entering the iPhone assembly business, Luxshare has already supplied various iPhone components and modules, including vibration motors, speakers, wireless charging modules and antenna modules — the last after more than five years of effort to get into higher-value electronics components. It also supplies a key module that enables Bluetooth connectivity in Apple’s premium wireless headphone AirPods Pro, assembly that was previously dominated by other rivals.

Such wide exposure, which helps vertical integration in assembly, has been a key to Foxconn’s success, giving it more control of the supply chain and making it more competitive.

Those who know Luxshare say it has also followed Foxconn’s international expansion to Southeast Asia and India.

“Luxshare is really like an annoying fly and it’s very difficult to get rid of ... it’s following Foxconn everywhere,” said a person close to Foxconn. “It wants to do everything Foxconn is doing, and it wants to do things that Foxconn is not doing as well.” Luxshare did not respond to Nikkei’s requests for comment.

A supply chain executive recalls Wang once directly saying that Taiwan’s companies possessed extraordinary professionalism and good discipline in supply chain management. “But Taiwanese companies are less like us in terms of speed and aggressiveness. You lack an important trait: to act like a wolf,” the executive quoted Wang as saying.

Wang, who downplays her links with Foxconn, was a production line worker at Foxlink, a connector company founded by Foxconn founder Gou’s younger brother, in the 1980s. Wang climbed up the ranks quickly at Foxlink and left it as a manager to start her own components import and export trading company in the late 1990s — the predecessor of Luxshare.

The Chinese company first appeared on Apple’s top 200 suppliers list in 2013 as a connector provider and emerged as an AirPods assembler in 2017 before securing orders for Apple Watch assembly in 2019. Now, through buying Wistron’s plant, it is scheduled to make a small quantity of iPhones from 2021 and enter larger-scale production by 2022, Nikkei has learned.

The stronger ties with Apple suggest the Chinese supplier can meet the American company’s rigorous standards for product quality and efficiency.

“These Chinese companies could have an edge as competitive rivals, not only because local governments grant subsidies but also because the very high P/E ratios in China’s capital market give them easier access to money,” said Sean Kao, a veteran supply chain analyst with IDC. “That allows them to make bigger bets in tech investment or acquisitions without needing to worry about returns and their bottom lines.”

Another key for Luxshare is talent, which the Chinese company is luring from competitors across the supply chain, Nikkei has learned. Luxshare’s board secretary David Huang, who joined in 2013, was a veteran at Foxconn, while another leading networking executive from the company joined in 2019 and became one of the “core” executives that leads Luxshare’s antenna team.

Still, Luxshare has developed a distinct corporate culture. Foxconn, shaped by Gou, has been compared to an army, with high-ranking executives scolded by Gou or asked to stand in meetings if they made mistakes. Current Foxconn Chairman Liu, who took the baton from Gou in June 2019, is trying to communicate more with younger employees through informal meetings.

Luxshare, on the other hand, has managers that are often 10 or even 20 years younger, sources familiar with the matter said. The company encourages entry-level employees to voice opinions through a WeChat group with hundreds of people, including the management team, the people said.

“Grace really listens to the young managers and team leaders and makes young people feel respected, like they are at the center of the company,” a person who is familiar with Luxshare said. “Sometimes she walks by and sees we are discussing things... she will say, ‘Never mind me, let me go get some coffee for you guys.”

Yet industry watchers do not expect Luxshare to seize Foxconn’s crown soon. It is still unclear whether Luxshare could be competitive if it had to expand its footprint outside China without Chinese state subsidies if the trade war triggers further upheaval in supply chains.

“I am not saying that Foxconn will face a dire risk from Luxshare, because Foxconn also has its own strength built over years and no company in the world could easily replace Foxconn,” a supply chain executive who has knowledge of both Foxconn and Luxshare said. “Foxconn has built an enormous manufacturing scale over years and would still play a crucial role in the electronic supply chain looking forward.”

A Foxconn executive, meanwhile, expressed strong confidence. “We are fully aware of Luxshare’s recent moves,” the executive said. “But we are not scared. We are ready for the competition and we won’t lose.”

But it is clear that Luxshare’s rise and its close relationship with Apple mean Foxconn has to be on guard — as Foxconn’s Chairman Liu made clear on Aug. 12.

“It’s very natural in a free market that there are new rivals,” said Liu as Foxconn announced quarterly earnings. “Foxconn will continue to enhance our own competitiveness and I believe all of our competitors know it’s not that easy to seize this world’s No. 1 crown. We know Luxshare is coming to [iPhone assembly] but we will monitor and see.”

Foxconn declined to comment on Luxshare, saying, “We do not comment on any aspect of our operations or our work for any customer.”

IDC’s Kao said it’s still hard to say who will be the winner in the new competition within the electronics supply chain, when all the companies not only require production footprints inside China — the world’s biggest factory for the last decade — but also need to expand overseas. “It is not clear whether these Chinese companies could still be successful when they need to operate in Vietnam, India and other countries... they still need time to prove that they could be as competitive when they were at home,” he said.