Blog: A Chinese Student’s Take on Being Targeted by Trump 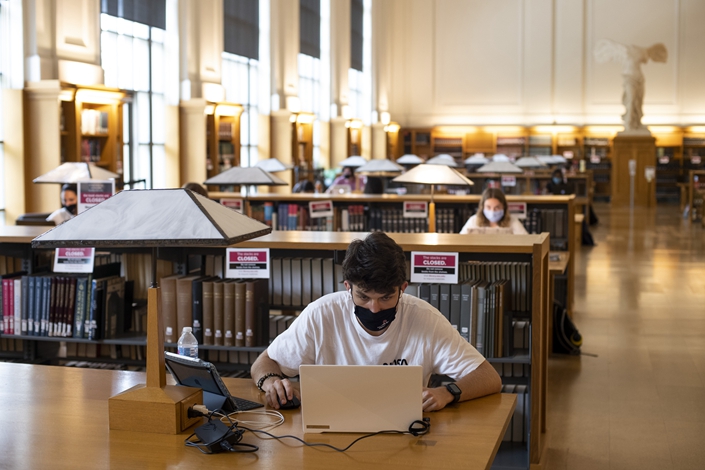 Liu Jiaqi is a Chinese student studying in the U.S. This article was first published on Globus.

In the four months since I quarantined myself at home in mid-July, I have found working remotely to be a blessing amid the Covid-19 pandemic and the U.S. economic downturn. Despite the riotous demonstrations in many other states and skyrocketing unemployment rate, California’s governor has insisted on doing the right thing, withstanding pressure from U.S. President Donald Trump to quickly reopen businesses.

However, I don’t know how many more days like this I have left.

Getting the gift of deportation

As a Chinese STEM major who graduated from one of China’s “seven major national defense colleges,” I have become a target in the Trump administration’s anti-China policies.

In May, triggered by the death of African American man George Floyd, a nationwide protest mushroomed in the United States, with some cities suffering looting and arson. Conservative members of the U.S. Congress proposed suspending or canceling visas given out through the H-1B and the Optional Practical Training (OPT) programs as a measure to protect American jobs and win popularity for the Trump administration.

I am currently in the second year of my three-year OPT program, which many international students apply for so they can temporarily work in the U.S. after they graduate. The program also provides employees with high-tech skills to companies in Silicon Valley and New York. The program provided a STEM major student like me with a three-year internship.

I had been planning to apply for an H-1B visa before my three-year OPT period ended. However, the Trump administration just imposed stringent visa restrictions on Chinese students, and anti-China sentiment in the U.S. has now reached a new peak. Chad Wolf, the acting secretary of homeland security, has once said the OPT program has been rife with abuse, particularly by Chinese students, who he said studied in the U.S. just to take what they learned back to China. Sen. Tom Cotton, a Republican, has unveiled the Secure Campus Act, legislation that would prohibit Chinese nationals from receiving visas to the United States for graduate or postgraduate studies in STEM fields. “If we must let a few in,” Cotton said, “then restrict them to (studying) Shakespeare and the Federalist papers.”

But that’s not the worst. On May 29, Trump issued a proclamation barring entry of Chinese graduate students and researchers affiliated with universities connected to the Chinese military or any other entities in the People’s Republic of China (PRC) that “implement or supports the PRC’s ‘military-civil fusion strategy.’” Current students with ties to Chinese military-affiliated institutions would have their visas canceled, and the president’s proclamation directed to the secretary of state to review whether their visas should be revoked.

On the same day, Immigration and Customs Enforcement (ICE) issued new rules for international students. Students already in the U.S. whose programs were exclusively online must “depart the country or take other measures, such as transferring to a school with in-person instruction” to maintain their lawful status.

It was clear that Trump expected international students to pressure educational institutions to offer-in person classes in the coming months. He also threatened to cut federal funding to schools that did not fully reopen.

In his push to stimulate the economy, Trump wanted students back in school as part of an effort to get workers back to work. As he eyed his own reelection bid, Trump desperately needed better U.S. economic numbers, and ideally, a successful economic recovery. Trump stands firmly with livelihoods, even at the cost of lives.

In response, top universities, such as Harvard and the Massachusetts Institute of Technology, sued the Trump administration over the ICE order, arguing that it violates the Administrative Procedure Act, which governs rule-making by federal agencies. The efforts of an array of leaders in higher education eventually got ICE to back away from the policy.

Nevertheless, I am still stressed out by the anti-China political sentiment in the US.

In mid-July, the Trump administration was considering a travel ban to the U.S. by members of the Communist Party of China and their families, as well as restricting travel by higher-ups in China’s military and state-owned enterprises.

I am a member of the Communist Party and have relatives who are members, which nearly guarantees my deportation. It is traumatizing that I have been affected by almost every new entry restriction recently imposed by the Trump administration.

Ever since the outbreak of the pandemic, I have been quarantined in my narrow room.

During the day, I check my phone anxiously for any flights back to China, news updates or Trump’s latest tweets. I reach out to everyone around me for help, including my classmates, professors and even the legal department at the company where I intern. But no one can tell me any clear way to avoid deportation.

I’ve started having nightmares about being forcibly deported. Sometimes, while lying in bed, I’m so anxious that I can’t even tell whether I’m awake or asleep.

But lately, I have become reconciled to the fact that there is nothing I can do but prepare for any eventuality. I’ve sold all my stock, stopped all unnecessary spending and packed a bag so that if necessary I can leave at a moment’s notice.

I have also decided to return to China after my visa expires next year. The reason why I insist on completing my OPT program is that the people in my company have been extremely supportive to me in this difficult time.

During every international teleconference, colleagues from all over the world have greeted me warmly and have offered me help. My manager has contacted the company’s legal department. Other colleagues have often reached out to chat with me about what’s bothering me. The company even arranged for me to talk with a therapist.

I hope that after I complete the OPT program (if possible) and return to China, I will still be able to work for a multinational company and enjoy a culturally diverse and inclusive working environment.

Caixin Global publishes a diverse range of opinions as letters to the editor on our blog. We’d like to hear what you are thinking or experiencing around the globe. Please submit your thoughts in publishable format to our email: opinionen@caixin.com