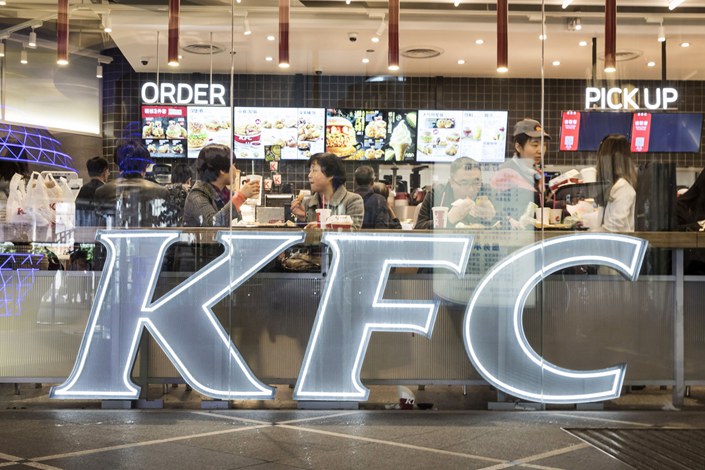 Signage for KFC is displayed in the window of a restaurant in Shanghai on March 19, 2019. Photog: Bloomberg

(Bloomberg) — Yum China Holdings Inc. is telling prospective investors it plans to price its second listing in Hong Kong at HK$412 ($53.10) per share, putting it on course to raise HK$17.3 billion, according to people familiar with the matter.

The New York-listed company, which operates KFC and Pizza Hut in the world’s most populous country, is selling 41.91 million shares in the offering. A price of HK$412 would represent a 4.9% discount to its closing price of $55.92 on Thursday, according to Bloomberg calculations.

The final price will be determined later on Friday, the people said, asking not to be identified as the information is private. A representative for Yum China did not immediately respond to calls or email seeking comment.

Yum China is joining a growing slate of U.S.-listed Chinese companies aiming for a trading foothold in Hong Kong as relations between the U.S. and China come under significant strain. U.S. regulators are threatening to restrict Chinese firms’ access to American capital markets if they do not allow authorities to review their audits.

The trend is a boon to Hong Kong, which is riding a wave of investor enthusiasm for initial public offerings in the city amid high liquidity and rising stocks. In addition to second listings such as Yum China’s, the city is set to get a big boost from the mega IPO of Jack Ma’s Ant Group, which could raise about $30 billion through a dual listing in Hong Kong and Shanghai, Bloomberg News has reported.

Other U.S.-listed Chinese firms to have done share sales in Hong Kong include JD.com Inc. and NetEase Inc. which raised $7.6 billion between them in June. A number of other firms are also planning second listings in the city, from data center operator GDS Holdings Ltd. to e-commerce service provider Baozun Inc.

Yum China operates 10,000 restaurants in over 1,400 cities across China, according to its website. The company reported a sputtering recovery from the effects of the coronavirus pandemic, with sales improving in April and May but weakening again in June, according to its latest earnings. It said comparable sales in the second quarter fell 11% from the previous year, and it expects them to remain under pressure in the third quarter.