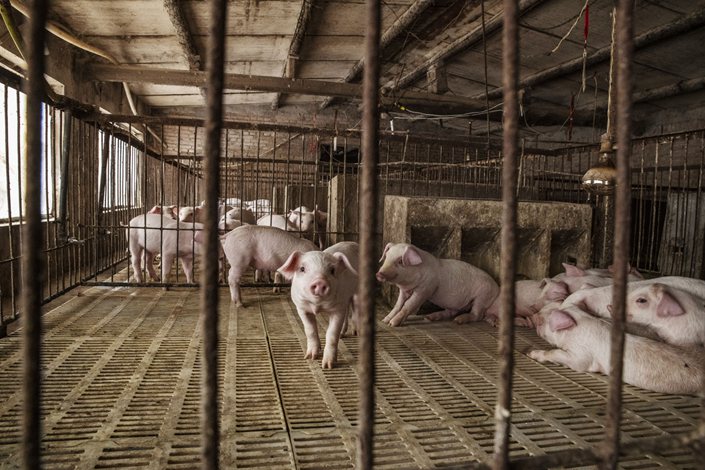 Piglets are kept in pens at a pig farm in Langfang, Hebei province, in 2019. Photoo: Bloomberg

(Bloomberg) — China’s massive hog farms are expanding rapidly on the back of government incentives and record pork prices, but it could be months before production increases enough to cool the market and curb imports.

The world’s biggest pork consuming and producing nation has seen prices and imports climb to all-time highs after African swine fever slashed herds by almost half. The price spike has fueled the country’s inflation, while foreign purchases are surging just as President Xi Jinping launches a campaign against food waste and the government preaches the virtues of self-sufficiency.

Companies like Wens Foodstuffs Group, Muyuan Foodstuff Co. and New Hope Liuhe Co. are engaged in ambitious programs to boost herds, though this won’t translate into an immediate softening of the market.

“It’ll probably be into 2021 before things start to normalize,” said Darin Friedrichs, a senior analyst with StoneX Group Inc. in Shanghai. “Part of the issue is that it will take a long time to recover the breeding herd,” noting that companies have taken to flying in high quality breeding stock from Europe.

The government approved more than 20,000 new hog farms in the first half, which have the capacity to raise over 150 million pigs, after Beijing offered incentives to encourage breeding. Among companies, Muyuan Foodstuff plans to double sales in 2020, while New Hope Liuhe is aiming to triple the number of hogs slaughtered in 2021 and increase that by a further 60% thereafter.

“Large profits from raising pigs have spurred a rapid recovery and capacity expansion,” said Lin Guofa, a senior analyst at Bric Agriculture Group, noting one hog can provide a net return of 2,000 yuan ($292). Net income at some of major players, including Wens Foodstuffs, Muyuan and New Hope Liuhe more than doubled in the first half from a year earlier.

“China needs to import breeding herds to rebuild stocks,” said Pan Chenjun, senior livestock analyst with Rabobank. “There is still a gap in breeding herd supply which limits the pace of recovery.” Many investors have expansion plans, but have not started construction, said Pan, who only expects herd inventories to return to normal levels by 2023-2024. China slaughtered about 700 million hogs a year before the outbreaks of African swine fever.

The country will continue to see strong pork imports in the fourth quarter, the peak consuming season, with prices staying elevated, though inbound shipments may be slow through October because of coronavirus inspections and customs clearance delays, said Pan. China’s meat and offal imports in the first eight months of 2020 jumped more than 70% on the same period last year.

Pork prices were up over 50% in August from a year earlier, and are a major driver of food inflation. Rising pork and corn prices, along with a recovery in domestic demand, have pushed up all animal protein prices, including beef and chicken, said the National Bureau of Statistics.

The rapid growth of the hog industry has also boosted imports of animal feed grain, such as soy and corn. China, having already achieved the ranking of the world’s top soybean buyer, may soon become the largest corn importer.