By Shaun Turton and Kong Meta 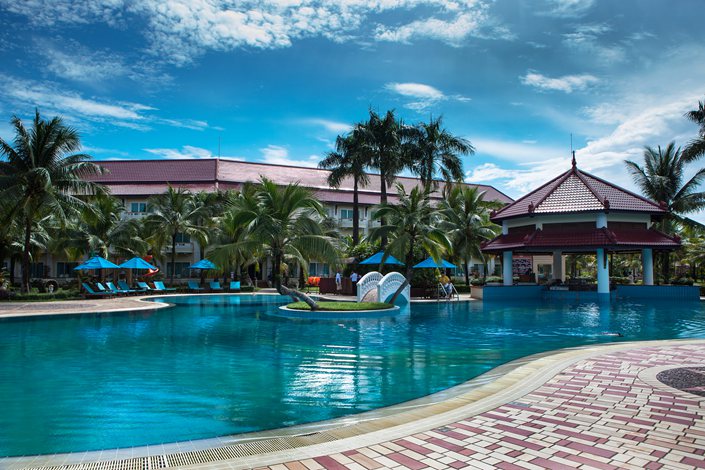 The Treasury’s stated reason was that UDG intimidated and evicted families from their homes on the company’s 45,000 hectare (111,000 acres) concession to make way for the development in the western province of Koh Kong.

However, multiple land disputes linked to the project have occurred over the past decade, starting in the years after the Cambodian government granted UDG its 99-year lease within a national park in 2008. The decision to penalize the company at this stage appears linked to growing tensions between the U.S and China.

In a statement, Treasury Secretary Steven Mnuchin accused the company of “corrupt” and “predatory” practices that “undermined the rule of law and exploited the resources of other countries.”

The Treasury identified UDG as a “state-owned entity” that was “acting for or on behalf” of an official of the People’s Republic of China.

Online financial data does not reveal any ownership links between UDG and Chinese state-owned enterprises, and the U.S. provided no further information or ownership documents proving links to the state.

Beijing’s closest ally in Southeast Asia, Cambodia has become a potential flashpoint in the geopolitical rivalry, with reports of plans by China to use the country to host military assets.

While recent attention has focused on a reported secret deal to allow China to use Cambodia’s Ream Naval Base, UDG has drawn speculation that its facilities could be used by the Chinese military. Such suggestions are often linked to the project’s soon-to-be completed 3 kilometer (2.4 miles) runway — the largest airstrip in Cambodia — and plans for a deep-sea port, but lack any conclusive evidence.

Comprising about 20% of Cambodia’s coastline, the UDG development was billed as a luxury resort that would cost up to $3.8 billion. But after the initial construction of a hotel, surrounding golf courses and roads, the project has largely remained stalled, with the exception of its airport.

The company’s grand vision of a casino city attracting millions of Chinese tourists is yet to materialize. Nor has there been progress on broader plans at the site for what has been called the “Cambodia-China Comprehensive Investment and Development Pilot Zone,” which is to feature industrial parks, container terminals and the port.

The development has been listed as a “priority cooperation project” by Cambodia and China since 2016. And while it predates Chinese President Xi Jinping’s announcement of the Belt and Road Initiative by five years, UDG has aggressively branded it a BRI project in its public materials.

A researcher who studies Chinese investment in Cambodia said UDG had, in effect, gained government support retroactively, as Beijing’s ties with the country developed.

“In my view, this started out as an ill-conceived and overly ambitious project by a private Chinese developer with no previous overseas experience,” the researcher said on condition of anonymity. “Progress dropped to a snail’s pace due to inadequate capital and protracted land conflicts with those already living in the area.”

Later, the expert continued, “with the majority of the land conflicts resolved, however imperfectly, and coinciding with the large wave of Chinese investment into Cambodia, the developers began to sign construction contracts with major Chinese state-owned enterprises and received political support from Beijing for at least part of the development.”

The researcher said this may have “injected additional legitimacy” into a project that appeared to be “treading water.”

Nikkei has sought comment from UDG via several email addresses linked to the company.

The company is being penalized under the Global Magnitsky Human Rights Accountability Act, which targets individuals or entities linked to corruption or serious human rights abuses. It allows U.S authorities to seize targets’ assets in the U.S and generally prohibits American individuals and companies from doing transactions with those on the list.

The U.S. has in recent years applied such sanctions to a Cambodian business tycoon involved in illegal logging and two senior military figures for human rights abuses. The sanctions against one of those military figures, top general Kun Kim, had already implicated UDG.

In its statement today, the Treasury said that Kim — sanctioned in December last year — provided military forces to help UDG forcibly evict villagers from disputed areas and burn their homes.

The Treasury said Kim, a close ally of Prime Minister Hun Sen, had “reaped significant financial benefits” from his relationship with UDG.

In June, provincial authorities in Koh Kong told local media they had resolved 80% of the land disputes at the site, which impacted more than 1,000 families. They said discussions were continuing with 184 families.

For many, the development has irrevocably changed their lives.

Kang Puy, 38, said UDG in 2009 blocked her family from their 25 hectares of farmland in Kiri Sakor district, stripping them of their livelihood of selling coconuts.

She said the company’s initial offer of adequate compensation was withdrawn, replaced with a far lower amount. A decade after helping to run a family fruit plantation making $10,000 a year, Puy said she now works as an accountant for $200 a month. She says some relatives took jobs on notoriously dangerous Thai fishing boats.

“Thanks for letting me know the sanction but I don’t know what impact it will have,” she told Nikkei.

“I feel very frustrated, but now it has been 11 years. I feel that I am just an ordinary person, I have no power.”