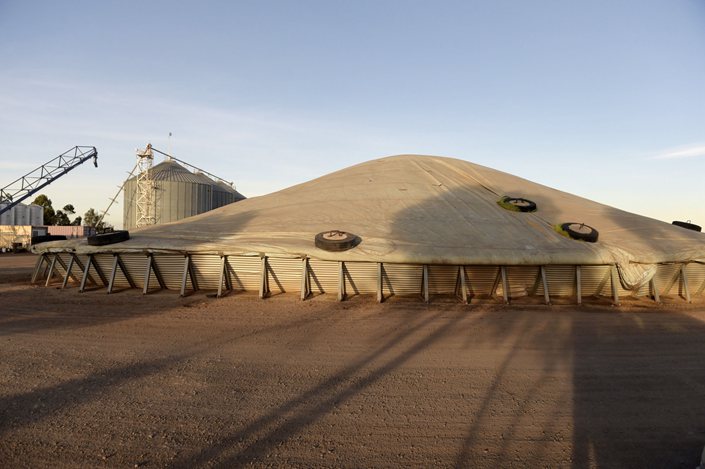 A stock pile of barley sits under a tarpaulin before it is loaded onto trucks and transported to the port for shipping, at Balliang, south of Melbourne, Australia, on May 18. Photo: Bloomberg

(Bloomberg) —Australia’s food exporters are facing a challenging year, with the value of shipments set to drop by 10%, as the country grapples with souring Chinese ties, shrinking meat sales and a virus-driven downturn in demand.

Government forecaster Abares expects agricultural exports to shrink to A$43.5 billion ($31.7 billion) as prices for many of its exports, including meat, wheat, barley and wine, slump because of the pandemic and Chinese trade restrictions.

Lower meat output, as rains spur farmers to retain cattle rather than slaughter them, is set to reduce the volume and value of exports, while rising grains production will offset the negative impact on shipments of lower prices.

Barley exports have been roiled by a demand hit unleashed by China’s decision to slap tariffs of more than 80% on the country’s shipments — then bar imports from biggest shipper CBH Grain Pty, according to Abares’ September report.

“The Australian feed barley price is expected to fall to A$230 per ton, 17% below the world indicator price,” Abares said. The drop reflects the imposition of prohibitive tariffs on exports to China, it said.

Still, other markets are opening up as prices decline.

The biggest new market for barley has been Thailand, said IKON Commodities CEO Ole Houe. “Prior to this year we shipped less than 2% of our barley to Thailand,” or typically less than 100,000 tons, he said. “This year we have so far shipped well over 600,000 tons, and we may even get to 800,000 tons.”

Abares points to Asian and Middle Eastern markets including Japan and Saudi Arabia as potential buyers.

Abares forecasts barley exports rising 31% in value in 2020-21 from a year earlier, with volume gaining 65% and prices dropping 21%.

Production is forecast to jump 25% because of good rains.

Wheat growers are also scrutinizing China, as its customs agency earlier this month put Australian exporters on notice that it will be stepping up inspections of shipments. It’s bad timing for farmers, with a 91% year-on-year increase in output expected from the coming harvest, following several years of drought.

Still, while the Asian country has been an increasingly big buyer of Australian wheat, it doesn’t dominate purchases. A free trade agreement with Indonesia that cuts feed grain tariffs is expected to bolster buying of wheat and barley.

Meat production and exports are being curbed in Australia as producers hold back livestock to rebuild herds after years of drought.

Several meatworks have been banned from shipping to China, after alleged packaging and contamination violations, while Abares also cites Covid-19 sample testing at Chinese ports as “an additional downside risk” if the virus becomes widespread in Australia.

Still, other buyers are waiting to pick up any slack. “At the moment beef is finding a home in major export markets, with low supply helping to prop up prices,” said Mecardo analyst Angus Brown. “South Korea, Japan and the U.S. are the big three markets which will receive more beef if China takes less.”

Value of beef and veal shipments will drop 27% on year; volume is set to decline by almost a quarter and prices by 5%.

The value of Australian wine exports is forecast to decline as volumes and prices fall. Demand has taken a hit from Covid-related restaurant and hotel closings during shutdowns, though at-home consumption increased. Like grains and meat, the wine industry has been hurt by drought, with the 2020 grape crush the smallest in a decade, according to marketing body Wine Australia.

Meanwhile, for commodities as a whole, the coronavirus — paired with a high level of exposure to China — remains a constant threat. “The Covid-19 pandemic has highlighted the issues and risks that come with highly concentrated supply chains,” Abares said.