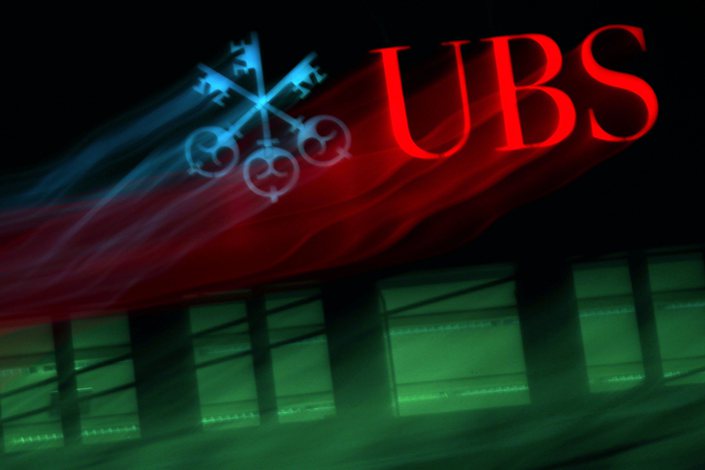 An illuminated company logo is displayed at a UBS Group AG bank branch in Zurich, Switzerland, on Oct. 14, 2019. Photo: Bloomberg

(Bloomberg) — UBS Group AG is exploring options to expand its asset-management business in China, taking advantage of relaxed rules to defend its leading position among foreign players in the 100 trillion yuan ($14.8 trillion) market.

Under new regulations introduced this year, foreign firms such as UBS can take full control of their mutual fund joint ventures in China, or seek partnerships with a local bank’s asset management arm to increase offerings.

“We’re not ruling out any opportunities,” Raymond Yin, head of Asia Pacific for UBS Asset Management said in an interview from his base in Shanghai, without specifying any plans. “We will continue to invest in the China market to maintain our leadership position.”

China is pressing ahead with the opening up of its financial industry and capital markets, luring global firms even amid escalating tensions with the U.S. Companies such as BlackRock Inc. have embraced the opportunities, with the world’s largest asset manager winning approvals in the past month for the first foreign-owned mutual fund license and a wealth-management joint venture.

The heightened foreign competition is putting pressure on incumbents like UBS that have long benefited from a first-mover advantage in China. UBS this year became the biggest global manager of Greater China funds with a 9.1% market share, up from 5.1% in 2018, according to Shanghai-based consultancy Z-Ben Advisors Ltd.

Regardless of the final decision on the next move, the Swiss bank’s money-management unit plans double-digit growth in its China headcount over the next few years, after doubling staff since 2017 to more than 40 people, Yin said.

The Zurich-based bank has obtained licenses ranging from banking and securities to fund management, giving it one of the most diversified portfolios among foreign firms in China. It was the first global manager to win control of a local securities joint venture in 2018.

In the cut-throat hedge fund market, the 28 foreign players including Bridgewater Associates LP only launched 18 products this year, fewer than half of last year’s total, missing out on a stock rally. By contrast, local rivals registered a record number of new funds. In the mutual fund business, foreign firms with local partners have attracted about $470 billion in new assets this year, half the rate of Chinese funds.

Still, UBS launched seven private funds this year, boosting assets under management at its wholly-owned private fund business to 2.34 billion yuan as of July 31, according to Licai.com. That puts it on track to overtake David Harding’s Winton Group Ltd. — just 30 million yuan ahead — as the biggest foreign private fund manager.

“We definitely aspire to be No. 1” among foreign players in the private fund business, Yin said. UBS has a few new products in the pipeline to broaden what’s already the most diversified offering, he said.

All of UBS’s 16 private funds have generated positive returns this year and since inception, building a track record of stable performance that helps it win clients, he said.

For UBS SDIC Fund Management, the mutual fund joint venture in which UBS has a 49% stake, Yin said the bank is still putting in more resources and “keeping all options open.”

While the pandemic has caused disruptions for bankers and clients alike, having an Asia Pacific head based on the mainland has also given UBS an edge over some foreign rivals that have regional bases in Hong Kong or Singapore, Yin added.

“Right now, when I visit clients in Beijing and Shanghai, I’m the only person sitting across the table managing the APAC business,” Yin said. “Because others with senior management outside China cannot come in.”