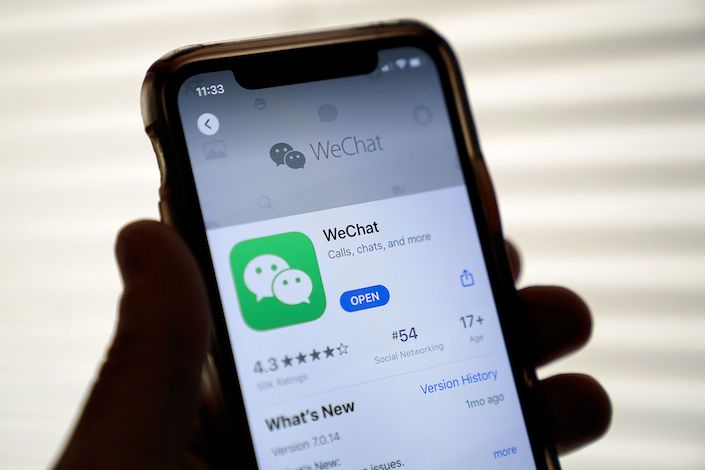 The Tencent Holdings Ltd. WeChat app is displayed in the App Store on a smartphone in an arranged photograph taken in Arlington

(Bloomberg) — The Trump administration’s curbs on WeChat were put on hold by a California judge, upending an effort to halt use of the Chinese-owned app in the U.S.

Magistrate Judge Laurel Beeler in San Francisco issued a preliminary injunction at the request of a group of U.S. WeChat users, who argued that prohibitions would violate the free-speech rights of millions of Chinese-speaking Americans who rely on it for communication. The app, which was supposed to disappear from U.S. app stores on Sunday, has 19 million regular users in the U.S. and 1 billion worldwide.

WeChat “serves as a virtual public square for the Chinese-speaking and Chinese-American community in the United States and is (as a practical matter) their only means of communication,” the judge wrote in the ruling, dated Saturday and released early Sunday. Effectively banning it “forecloses meaningful access to communication in their community and thereby operates as a prior restraint on their right to free speech.”

The U.S. administration had argued that WeChat posed a national security threat, but the judge said there was insufficient evidence of that. “Certainly the government’s overarching national-security interest is significant,” she wrote. “But on this record — while the government has established that China’s activities raise significant national security concerns — it has put in scant little evidence that its effective ban of WeChat for all U.S. users addresses those concerns.”

The Department of Justice and Commerce Department didn’t immediately respond to requests for comment.

The U.S. has claimed that WeChat is a threat because its owner, Tencent Holdings Ltd., is intertwined with the Chinese Communist Party, which can use the app to disseminate propaganda, track users, and steal their private and proprietary data. It’s a similar argument that the administration has used to target the TikTok app, while also forcing a sale of that app’s U.S. operations.

The U.S. government on Saturday delayed its plan to prohibit downloads of TikTok, the popular video-sharing app after Trump said he approved Oracle Corp.’s bid for the U.S. operations of TikTok “in concept.” The TikTok ban was also set to go into effect Sunday, but the order has been delayed until Sept. 27. TikTok on Friday filed suit in Washington, D.C.

The WeChat users have said the restrictions on the app are driven by election-year politics.

At a court hearing Saturday, Michael Bien, an attorney for the WeChat users group, said the restrictions on WeChat are a far cry from the “narrowly tailored” measures that the government is required to impose so as not to unnecessarily curtail people’s constitutional rights.

Michael Drezner, a lawyer for the the government, said the anxiety and uncertainly U.S. WeChat users may experience because of the prohibitions doesn’t entitle them to an order halting the implementation of the restrictions. Their reliance on WeChat is the result of China’s ban on other social media, which has made WeChat the exclusive, Chinese government-controlled option for them to communicate with people in China, according to Drezner.

The judge in the case on Friday rejected a request for a preliminary injunction, which users had sought on the grounds that the executive order was too vague. The Commerce Department on Friday detailed which transactions with WeChat and its Chinese parent company won’t be allowed under the Aug. 6 executive order. The judge scheduled the hearing Saturday in response to a revived request from the users group.