Opinion: World’s GDP Isn’t Going to Shrink as Much as Expected in 2020 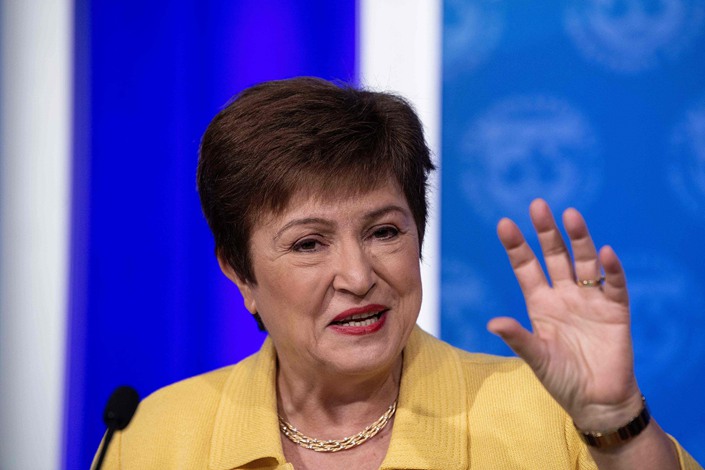 Kristalina Georgieva is managing director of the International Monetary Fund (IMF). This article, edited for length, was Georgieva’s remarks during an online event organized by the London School of Economics on Tuesday.

First, let’s look at the economic picture. Global economic activity took an unprecedented fall in the second quarter of this year, when about 85% of the world economy was in lockdown for several weeks.

The IMF in June projected a severe global GDP contraction in 2020. The picture today is less dire. We now estimate that developments in the second and third quarters were somewhat better than expected, allowing for a small upward revision to our global forecast for 2020. And we continue to project a partial and uneven recovery in 2021. You will see our updated forecast next week.

We have reached this point largely because of extraordinary policy measures that put a floor under the world economy. Governments have provided around $12 trillion in fiscal support to households and firms. And unprecedented monetary policy actions have maintained the flow of credit, helping millions of firms to stay in business.

But some were able to do more than others. For advanced economies, it is whatever it takes. Poorer nations strive for whatever is possible.

This gap in response capacity is one reason why we see differentiated outcomes. Another reason is the effectiveness of measures to contain the pandemic and restart economic activities. For many advanced economies, including the United States and the Euro Area, the downturn remains extremely painful, but it’s less severe than expected. China is experiencing a faster-than-expected recovery. Others are still hurting badly, and some of our revisions are on the downside.

Emerging markets and low-income, fragile states continue to face a precarious situation. They have weaker health systems. They are highly exposed to the most affected sectors, such as tourism and commodity exports. And they are highly dependent on external financing. Abundant liquidity and low interest rates helped many emerging markets to regain access to borrowing — but not a single country in Sub-Saharan Africa has issued external debt since March.

So, my key message is this: The global economy is coming back from the depths of the crisis. But this calamity is far from over. All countries are now facing what I would call “The Long Ascent” — a difficult climb that will be long, uneven, and uncertain. And prone to setbacks.

As we embark on this “ascent,” we are all joined by a single rope — and we are only as strong as the weakest climbers. They will need help on the way up.

The path ahead is clouded with extraordinary uncertainty. Faster progress on health measures, such as vaccines and therapies, could speed up the “ascent.” But it could also get worse, especially if there is a significant increase in severe outbreaks.

Risks remain high, including from rising bankruptcies and stretched valuations in financial markets. And many countries have become more vulnerable. Their debt levels have increased because of their fiscal response to the crisis and the heavy output and revenue losses. We estimate that global public debt will reach a record-high of about 100% of GDP in 2020.

There is also now the risk of severe economic scarring from job losses, bankruptcies, and the disruption of education. Because of this loss of capacity, we expect global output to remain well below our pre-pandemic projections over the medium term. For almost all countries, this will be a setback to the improvement of living standards.

This crisis has also made inequality even worse because of its disproportionate impact on low-skilled workers, women and young people. There are clearly winners and losers — and we risk ending up with a “Tale of Two Cities.” We need to find a way out.

So, what is the path forward? We see four immediate priorities:

First, defend people’s health. Spending on treatment, testing, and contact tracing is an imperative. So too is stronger international cooperation to coordinate vaccine manufacturing and distribution, especially in the poorest countries. Only by defeating the virus everywhere can we secure a full economic recovery anywhere.

Second, avoid premature withdrawal of policy support. Where the pandemic persists, it is critical to maintain lifelines across the economy, to firms and workers — such as tax deferrals, credit guarantees, cash transfers and wage subsidies. Equally important is continued monetary accommodation and liquidity measures to ensure the flow of credit, especially to small and medium-sized firms — thus supporting jobs and financial stability. Cut the lifelines too soon, and the Long Ascent becomes a precipitous fall.

Third, flexible and forward-leaning fiscal policy will be critical for the recovery to take hold. This crisis has triggered profound structural transformations, and governments must play their role in reallocating capital and labor to support the transition. This will require both stimuli for job creation, especially in green investment, and cushioning the impact on workers: from retraining and reskilling, to expanding the scope and duration of unemployment insurance. Safeguarding social spending will be critical for a just transition to new jobs.

Fourth, deal with debt—especially in low-income countries. They entered this crisis with already high debt levels, and this burden has only become heavier. If they are to fight the crisis and maintain vital policy support; if they are to prevent the reversal of development gains made over decades, they will need more help—and fast. This means access to more grants, concessional credit and debt relief, combined with better debt management and transparency. In some cases, global coordination to restructure sovereign debt will be necessary, with full participation of public and private creditors.

In all these areas, our member countries can count on the IMF. We will help them all the way up the mountain. We will strive to be their “sherpa,” We will help show the way with sound policy advice. We will provide the training some may need. And above all, we will be there with financial support and help ease the debt burden for those who otherwise may not make it.

We have provided financing at unprecedented speed and scale to 81 countries. We have reached over $280 billion in lending commitments — more than a third of that approved since March. And we are ready to do more: we still have substantial resources from our 1 trillion in total lending capacity to put at the service of our members as they embark on their “ascent.”