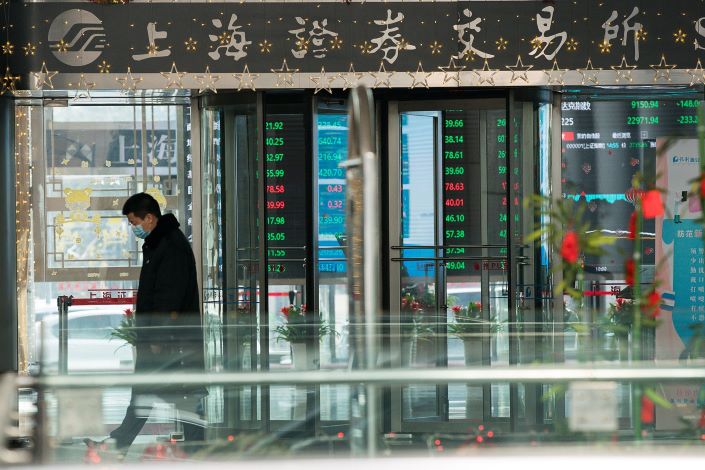 (Bloomberg) — China’s yuan strengthened and stocks rose on mainland exchanges in a positive start to the month for traders returning to work after an eight-day holiday.

The currency advanced 1.3% as of 11:41 a.m. in Shanghai, tracking recent moves in the offshore rate and hitting its strongest level since April 2019. The People’s Bank of China set its yuan fixing at 6.7796 per dollar on Friday — or slightly stronger than expected — suggesting it will continue to allow for currency gains after the yuan had its best quarter since 2008 versus the greenback.

“Markets will take any indication that the authorities are not too concerned about the level of the yuan as a positive sign,” said Khoon Goh, head of research at Australia & New Zealand Banking Group Ltd. “In effect, not sending a signal is in itself a signal.”

The Shanghai Composite Index of stocks rose 1.9% and the CSI 300 Index climbed 2.3% by the mid-day break. Sentiment was bolstered by the upcoming Communist Party plenum in late October, said analysts. Beijing is expected to launch further policies to stimulate demand when leaders gather to unveil a framework for a fresh five-year growth plan.

“Investors are looking forward to the Communist Party meeting toward month-end, before which market sentiment has usually been positive,” said Daniel So, strategist at CMB International Securities Ltd. Elsewhere, an official gauge of activity in China’s manufacturing sector gained in September on stronger production and orders, suggesting the recovery momentum remained solid.

China is unique among major economies to close its financial markets for long periods several times a year. In February, stocks were hit by a ferocious wave of selling and the yuan weakened past a key level against the dollar, as a rapidly evolving coronavirus emergency gripped markets. In May 2019, the CSI 300 Index sank as much as 4.8% on its reopening day after a series of tweets by President Donald Trump undermined confidence in a trade agreement.

Early data gave a mixed picture of this year’s Golden Week break. Citigroup analysts said the 637 million domestic tourists during the period was better than expected. Income was down 28% from a year ago, according to the Ministry of Culture and Tourism. China Tourism Group Duty Free Corp. fell as much as the 10% daily limit in morning trade.

The Shanghai Composite is among the world’s best-performing major indexes this year. October has also historically been the best month of the year for the benchmark, rising 2.5% on average since 2010.