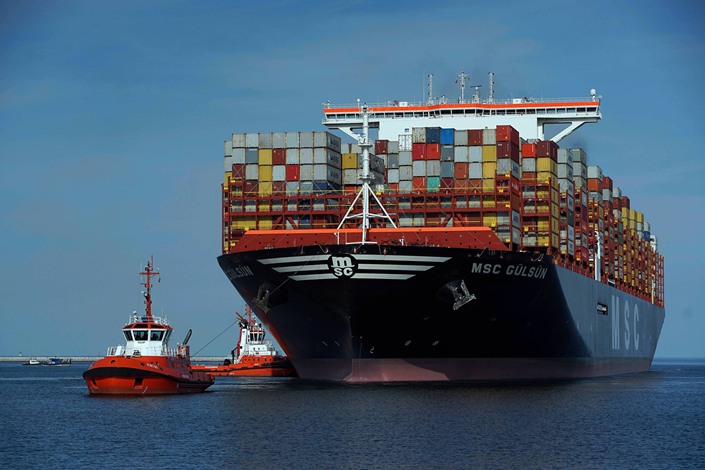 The world's largest container ship MSC Gulsun sails into a port in Gdansk, Poland, on August 23.

Edward Liu is principal representative at the China liaison office of the International Chamber of Shipping, an international shipping industry association.

The European Parliament recently voted for the inclusion of international ships into the EU Emissions Trading System (ETS). The European Commission, with the blessing of the EU leaders at their summit in July, is also developing a similar proposal at the request of its president, Ursula von der Leyen.

Given this political momentum, one might think that it is inevitable that ships trading with Europe will have to purchase EU carbon allowances. However, any such assessment is premature.

Emissions trading, which was designed for sectors responsible for activities like power generation and cement production, is wholly inappropriate for the shipping industry, which is comprised principally of SMEs. The application of a regional ETS to ships operating globally also carries the risk of serious market distortion. If a market-based measure is to be introduced by the United Nation’s body authorized to regulate the shipping industry, the International Maritime Organisation (IMO), a global levy per ton of fuel purchased for consumption would be a more effective method to reach our shared goal — complete decarbonization.

What’s more, this EU ETS initiative, which was launched unilaterally, could undermine the authority of the United Nations and the IMO and its strategy to eradicate carbon emissions from shipping worldwide — a strategy strongly supported by China. Indeed, the EU also signed up to the IMO’s plan which has led to a successful reduction in absolute maritime CO2 emissions since 2008, despite a significant increase in maritime trade. The application of a regional ETS to global shipping may derail the ongoing IMO negotiations and decelerate the continued fall in the sector’s emissions worldwide.

However, the ETS initiative poses another concern — one with enormous implications for China, which most of the EU’s leaders may have overlooked. The specific requirement for ships, regardless of their origins, to purchase the EU’s carbon allowances will hinder the healthy trading relationship between the EU and China.

From the perspective of non-EU governments, any extension of the EU-ETS to shipping will therefore be seen for what it is: an extraterritorial tax on global trade. Under the terms of the EU’s proposal, a container ship could begin a westbound voyage in China, unloading cargo at ports across Asia before reaching Europe, and then be required to purchase allowances for carbon emitted over the course of the entire voyage. Given ASEAN is China’s largest trading partner, this is set to have a significant impact on Chinese exporters, importers and shipping companies.

In 2019, China was the third-largest partner for the EU’s exports of goods and the largest partner for the EU’s imports of goods. The EU’s exports to China reached €198 billion while imports from China totaled €361 billion ($425 billion). It goes without saying that the governments of EU member states, such as Germany—the top destination for Chinese exports in the EU — hope to maintain good relations with their major trading partners.

We can also anticipate that some non-EU governments will object strongly to this move — especially once the European Commission publishes its forthcoming detailed regulatory proposals in the summer of 2021. This is precisely why the application of the EU-ETS to shipping is not unavoidable, at any rate in a form whereby ships would be required to purchase EU carbon allowances.

In addition, some EU leaders have made the task of drumming up external opposition easy by declaring explicitly that the billions of euros per year that might be generated from selling ETS allowances to non-EU shipping companies should be used to support the EU’s economic recovery from Covid-19. On average, China and Europe trade over €1 billion a day; effectively, the EU is imposing a tax on the sector to raise funds to pay for its $859 billion post-coronavirus recovery package.

China and countries outside the EU will undoubtedly view this initiative as a not-so-subtle means of getting the rest of the world to pay for the EU’s economic recovery, and at a time when we need to encourage global trade, rather than creating new trade barriers.

However, there is another reason why a requirement for ships to play in the EU carbon market is far from inevitable. The European Commission officials tasked with developing the detailed proposals recognize the importance of a global solution at the IMO and have publicly stated that they remain committed to the IMO process.

The European Commission has clear political instructions to extend the regulatory scope of the ETS to shipping. However, the Commission is comprised of high-caliber officials who may yet devise a system that could be compatible with an IMO solution.

This should include being compatible with the $5 billion research and development program proposed by the industry, to be financed by a mandatory R&D contribution per ton of fuel, which the IMO will consider at the Marine Environment Protection Committee meeting in November this year.

Within the EU-ETS legal framework, EU officials who, like the industry, are serious about wanting to decarbonize shipping completely, could still propose an alternative system for the international shipping sector.

Thus, this is why, with judicious implementation dates and review clauses — dates and clauses that take into account the ambitious IMO timetable to which EU nations signed up two years ago — it may yet be possible for the European Commission to enact their political masters’ orders in a way that avoids destroying global efforts to decarbonize shipping completely.