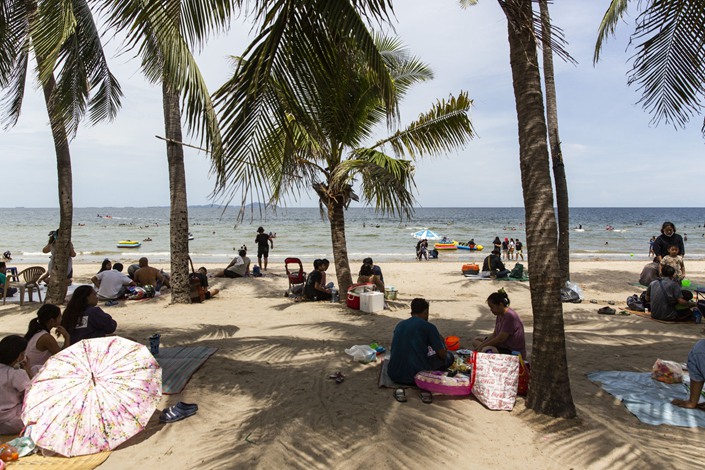 (Bloomberg) — Thailand is in talks with China to establish a quarantine-free travel corridor by January to rescue its ailing tourism industry.

The agreement with Beijing will be subject to the success of a limited reopening of the Thai tourism industry to foreign travelers this month, according to Tourism Minister Phiphat Ratchakitprakarn. China, which accounted for more than a quarter of Thailand’s tourist arrivals before the pandemic, will be the first low-risk country the Southeast Asian nation will sign up for quarantine-free travel, he said.

The current mandatory quarantine will be replaced by coronavirus testing and a mobile tracking application for the Chinese visitors if the return of foreign tourists does not lead to fresh Covid-19 outbreaks, Phiphat said. About 11 million Chinese holidaymakers visited Thailand in 2019, netting the country about $17 billion, official data show.

Thailand has struggled in its efforts to reopen its borders to tourists due to opposition from a section of the local industry and concern among the public that the government is ill-prepared to deal with a second wave of infections. But a pact with China may open the door for similar travel agreements with countries such as Japan, South Korea, Singapore and Taiwan, Phiphat said.

“It can be a very happy new year as Thailand’s travel high season is the perfect time to allow people into the country,” Phiphat said in an interview in Bangkok on Thursday. “Most Chinese visitors come to Thailand for a week, so being quarantined would not be worth the trip for many.”

The minister expects tourist arrivals to total between 5 million to 10 million next year, compared with an estimated 7 million this year. While Thailand has weathered the virus outbreak better than most other Southeast Asian nations, the pandemic has devastated its tourism industry, which netted more than $60 billion in revenue from about 40 million visitors in 2019.

“China has about 800 million people in 22 provinces that have been free from infections,” Phiphat said. “If we can attract even just 1% of those people to travel here, that would already be plenty.”

The first group of visitors from China under a previously announced long-term tourist visa program will arrive in Bangkok on Tuesday, the minister said. The government expects to issue about 1,200 visas a month under the program to help the industry that’s reeling from no foreign tourists arrivals for five months in a row.

“Thais don’t have enough money to boost the industry, so either way we have to find a way to bring in foreign tourists,” Phiphat said. “If we don’t receive any foreign tourists, our economy will suffer a heavy contraction.”

Thailand is also grappling with mounting anti-government protests, prompting authorities to impose a state of emergency in Bangkok on Thursday. The protesters are now planning more rallies in the capital and outside in the coming days, scaring away potential foreign tourists. But that won’t stop the government from easing visa curbs, Phiphat said.

“I’m concerned, but I’m confident that an understanding can be reached and it won’t become violent,” Phiphat said.