Opinion: The Lessons of Shenzhen’s State Firms Since 1980 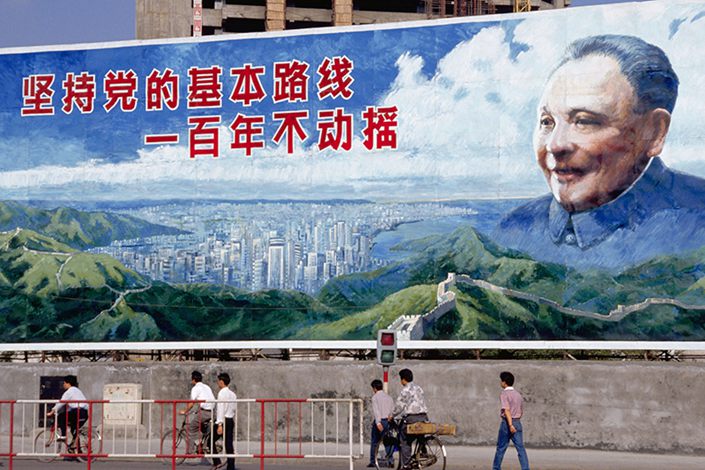 Deng Xiaoping's southern tour in 1992 helped bolster to process of reform and opening up, playing a huge role in the development of Shenzhen.

Zhang Siping is a former deputy mayor of Shenzhen. This article, edited for length, was first published in China Reform magazine.

Second, there is a serious disparity between the financial resources obtained by Shenzhen’s SOEs from the banking system and the economic and social benefits generated from those resources. For a long time, banks have given huge support to SOEs. From a national perspective, loans obtained by private enterprises accounted for about 25% of total bank loans, yet the private firms made 50% of the tax contributions and accounted for 60% of total GDP. The situation is similar in Shenzhen. In 2017, the city’s SOEs had 1.52 trillion in total liabilities, while private enterprises had 1.49 trillion in liabilities with a liability-to-asset ratio of 63.4%.

In 2017 Shenzhen’s municipal SOEs had total assets of 2.4 trillion yuan and reported total profits of 85.1 billion yuan, amounting to only a 3.6% return on total assets. Although the return on total assets of Shenzhen’s state-owned enterprises is much higher than the average of about 2% for centrally administered and other city-level SOEs, it is far lower than the average bank loan interest rate, which is about 5% for state-owned enterprises.

By comparison, the average interest rate on bank loans to private enterprises is usually about 8%, and private enterprises’ cost of financing is about 10%. This phenomenon shows that while SOEs are profitable from their own perspective, but from a comprehensive societal perspective, they are actually operating at a long-term loss.

The third is the disparity between the government land resources occupied by SOEs and the contributions that these enterprises make to Shenzhen’s economic development by relying on such land resources.

For decades, state-owned enterprises have obtained a large number of high-quality land resources in the center of the original special economic zone. This land is a valuable resource for Shenzhen’s economic and social development and has produced huge value-added benefits. Although these resources constitute an important part of the existing state-owned net assets, the large amount of land obtained by SOEs is seriously at odds with their contributions to the economic and social development of Shenzhen.

Over the past few decades, the amount of waste and loss caused by SOEs in land use is staggering, and the value is difficult to estimate. For example, Shenzhen Nanyou Group Holdings Ltd. obtained about 20 square kilometers (7.7 square miles) of valuable land from the government in the 1980s. By the beginning of the 21st century, most of the land was wasted, and the company was facing insolvency. Examples like such are not an isolated phenomenon in the history of the development of SOEs.

Fourth, a large disparity exists between the huge resources that SOEs obtain from the government and the contributions they make to Shenzhen’s economic development.

In addition to land and financial resources, SOEs also benefit from a large number of government-sponsored preferential policies and important resources that help companies grow, such as finance, franchise rights and corporate listing indicators.

For example, over time, the government has given SOEs licenses, operating permits, and qualifications for general contractors to many financial institutions. However, for various reasons, these important licenses were lost as the SOEs ran into operational difficulties, and faced closures, reorganizations and transfers. For example, in the 20th century, with the support of relevant state departments, Shenzhen’s earliest financial institutions, including Shenzhen Development Bank, China Southern Fund Corp., and Shenzhen Commercial Bank, were closed or taken over. With the exception of Vanke Group, much of the first batch of SOEs listed in Shenzhen has disappeared.

Fifth, Shenzhen SOEs have lost more money than they have made in their 40-year history. At the beginning of the 21st century, when SOEs in competitive sectors withdrew, the government failed to recover any funds in the restructuring of many state-owned enterprises and paid considerable reform costs in repayment of debts, placement of employees, and handling historical issues. Losses caused by mistakes in investment decision-making were countless and huge in the 1990s.

In 2002, the amount of loss of state-owned assets written off by the three companies, SDIC, Xianke, and Foreign Trade, reached 3 billion yuan when they implemented debt-to-equity swaps. During the restructuring and withdrawal of state-owned enterprises in 2003, the amount of nonperforming assets of enterprises written off was as high as tens of billions, which far exceeded the total profits made by these enterprises over the years.