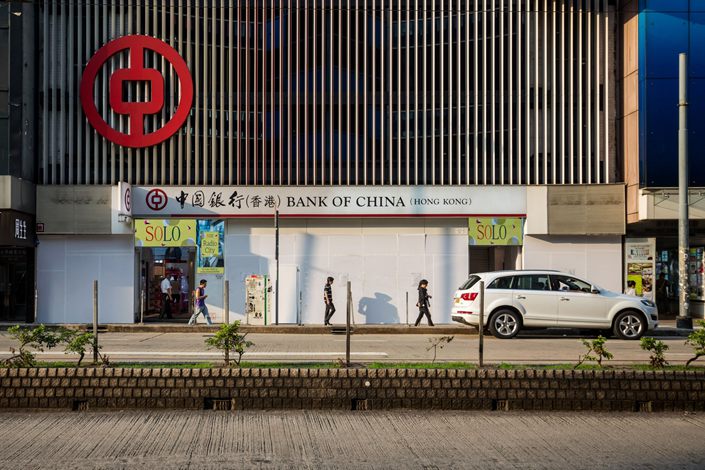 Pedestrians walk past a Bank of China Ltd. branch in the Causeway Bay district of Hong Kong on Oct. 27, 2019. Photo: Bloomberg

(Bloomberg) — Bank of China Ltd. plans to expand its headcount in the offshore bond business by 40% as it fights with global banks for a greater slice of a market that’s seen a surge in Chinese borrowers.

The lender is seeking to add 20 more staff to its offshore bond team over the next five years, Hu Kun, its general manager of investment banking and asset management department said in an interview. The bank aims to win more dollar bond deals by Chinese technology giants and also sees rising interest in euro notes by mainland borrowers, he added.

The team currently has about 50 staff across offices in Hong Kong, Singapore and London, covering deals in Asia, Europe, Middle East and Africa, he said.

“Our investment in human resources will be based on the rapid growth of the offshore bond market and BOC’s overall development layout,” Hu said in an interview with Bloomberg. “It is a logical business development.”

One of the big four Chinese banks, Bank of China has kept its top rank in the China offshore bond market since 2016, according to Bloomberg’s league table data. Over this period, the dollar bond segment for Chinese issuers has doubled to $864 billion as the nation’s firms sought funding for overseas acquisitions and debt refinancing.

Yet when compared to top international investment banks, Hu said he sees room for the bank to improve its debt capital market-related services, such as settlement, market-making and credit research.

Bank of China played a secondary underwriting role as a joint bookrunner on offerings from major tech firms including Tencent Holdings Ltd., Baidu Inc. and Xiaomi Corp. this year, but acted as a global joint coordinator on jumbo deals from the likes of State Grid Corp. of China, Bloomberg data show.

“It is quite a natural choice for tech firms to pick international banks to arrange their bond deals, which sponsored their IPO (initial public offering) in the offshore market,” said Hu. “Indeed, as a Chinese bank, we are striving to get more deals from this sector.”

It is likely that Chinese investors will become more willing to buy euro-denominated assets, seeking to diversify from dollar-denominated asset, given the rising tensions between China and U.S, said Hu.