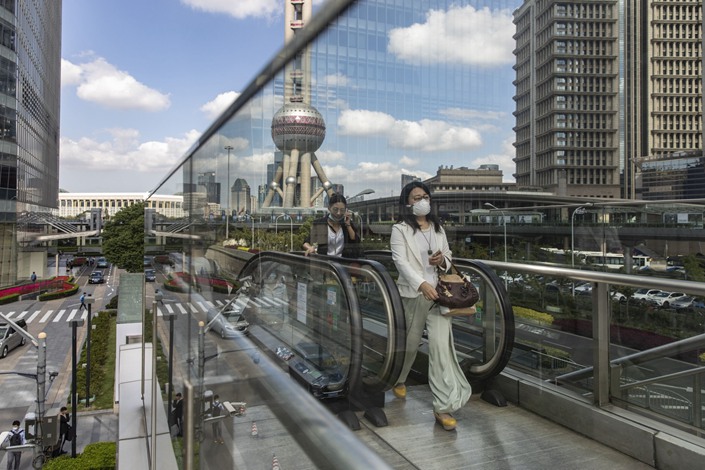 Morning commuters ride an escalator in the Lujiazui Financial District in Shanghai on Oct. 9, 2020. Photo: Bloomberg

(Bloomberg) — Chinese technology shares tumbled for a second day after Beijing clamped down on the internet industry, wiping out more than $200 billion of value.

Tech is the latest sector to be targeted by Beijing after new curbs on financial firms that triggered the shock suspension of Ant Group Co.’s $35 billion stock sale last week. Xi Jinping’s government is increasingly curtailing the influence of private corporations that dominate its burgeoning internet, e-commerce and digital finance industries, pivoting away from its previously hands off approach.

“I literally gasped when I first read these guidelines,” said John Dong, securities attorney at Joint-Win Partners in Shanghai. “The timing — on the eve of Singles’ Day — the forcefulness and the resolve to remake the tech giants is startling.”

China’s antitrust watchdog is seeking feedback on rules that establish a framework for curbing anti-competitive behavior such as colluding on sharing sensitive consumer data, alliances that squeeze out smaller rivals and subsidizing services at below cost to eliminate competitors. They may also require companies that operate a so-called Variable Interest Entity — a vehicle through which virtually every major Chinese internet company attracts foreign investment and lists overseas — to apply for specific operating approval.

“Internet giants have expanded their reach into various sectors like finance and health care that are vital to the economy and that really concerns regulators,” said Shen Meng, director of Beijing-based boutique investment bank Chanson & Co. “The move could discourage firms in the tech sector to list in the near term as those impacted will need time to adjust their businesses accordingly.”

On Nov. 3, policymakers shocked the investment world by suspending an initial public offering by Ant Group, a fintech company owned by billionaire Jack Ma. The decision came just two days before shares were set to trade in a listing that attracted at least $3 trillion of orders from individual investors.

Liang Tao, vice chairman of China Banking and Insurance Regulatory Commission, said on Wednesday that the country will also strengthen its anti-monopoly examinations of the fintech sector.

The new regulations for the internet industry signal a “further tightening” of the online economy, although the real impact will depend on how the rules are enforced, JPMorgan Chase & Co. analysts led by Alex Yao wrote in a note.

The proposed regulations come at a bad time for tech shares, which are already under pressure from a global rotation that has sent the Nasdaq Composite Index almost 3% this week.

“Beijing’s tightening regulations, including the antitrust laws, is a heavy blow to the technology giants,” said Daniel So, Hong Kong-based strategist at CMB International Securities Ltd. “It’s an additional blow to the shares, when investors are rotating out of the sector into old-economy shares because of the vaccine boost,” he said, adding that firms such as Tencent and Alibaba will continue to face downside pressure.