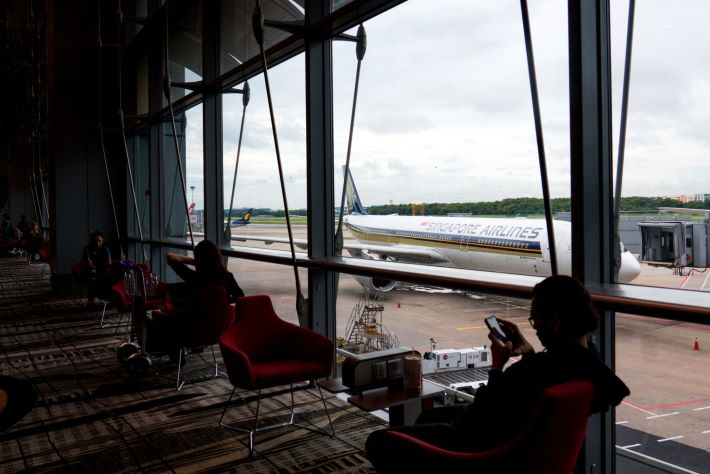 There will be several flights a week on Singapore Airlines Ltd. and Cathay Pacific Airways Ltd. from that date, rising to daily from Dec. 7. A maximum of 200 people will be permitted on each flight and details of the arrangement, released nearly a month after the two Asian hubs first announced they’d reopen their borders to one another, will be reviewed after one month.

Singapore Minister for Transport Ong Ye Kung said at a news briefing that this was the first travel bubble of its type and may be used as a template for other countries, if successful. The travel bubble will help ensure a brighter future for the city-state’s Changi Airport and Singapore Airlines, he said.

Travel bubbles are seen as key to reopening borders ahead of the rollout of an effective and internationally recognized vaccine. But they’ve been hard to put into practice as the coronavirus continues to spread or flare again in much of the world. Cases globally have surpassed 51 million while deaths are nearing 1.3 million.

Even the Singapore-Hong Kong arrangement comes with a long list of requirements and some restrictions. Ong said the waiting time for a Covid test would likely be about four hours and fares would be a commercial decision for the two airlines.

“I suspect travelers might well be quite careful in the beginning before they gradually become more confident,” Ong said. “I suspect that many Singaporeans and Hong Kongers will take a wait-and-see attitude until after awhile you can do one test less perhaps.”

Flying on the travel bubble between the two cities will also require a degree of paperwork. Tests should be taken within 72 hours prior to departure and applications for travel approval should be done online at least seven days ahead of time. Should travelers become Covid positive in either city, they would need to bear the full cost of any medical treatment provided to them.

Shares in Singapore Airlines dipped after the announcement, down 0.3%. Cathay rose 1.4%. Both carriers rose sharply on Tuesday after a study showing a vaccine developed by Pfizer Inc. and BioNTech SE protects most people from the coronavirus.

Having brought their Covid-19 outbreaks largely under control, Hong Kong and Singapore are eager to prise open their borders and get their economies ticking back to life again. Hong Kong’s total reported infections stand at 5,389, while Singapore’s tally is just over 58,000. That contrasts with many nations in Europe, as well as the U.S., which is now reporting over 100,000 cases a day.

“Both Singapore and Hong Kong rely a lot on the success of the airlines and airports for their economies,” said Shukor Yusof, founder of aviation consulting firm Endau Analytics.

Officials from Hong Kong and Singapore said on Oct. 15 that quarantine would be replaced by coronavirus testing and that the two cities were hoping to start it in November. Travelers must have been in Hong Kong or Singapore for 14 days before departure and need to take and pass mutually recognized virus tests.

On Nov. 3, Hong Kong announced new rules stating that arrivals from anywhere other than mainland China would have to quarantine in a hotel for 14 days. But visitors from Singapore will be exempted from this under the travel bubble agreement.

Singapore already allows people from five countries for general travel without having to serve quarantine, though they still have to isolate when they return home. The city-state is also assessing the risk travelers pose based on where they are arriving from. The priority is to have effective tests to replace the quarantine requirements that deter people from flying overseas.

“Affordable testing will be the key to reviving travel,” said Mayur Patel, OAG Aviation Worldwide Ltd.’s regional sales director for Japan and Asia Pacific. “If the cost of testing is too expensive, it’s not going to drive demand.”

“We are obviously very keen to make the travel bubble a success,” Lee Lik Hsin, Singapore Airlines’ executive vice president of commercial, said on Monday. “Of course we do have to take into account the various considerations that the government, the regulators will have in approving such a bubble and being experimental, you can expect some level of conservatism.”

The pressure is on for places like Hong Kong and Singapore, which depend on international trade and tourism. Ong has warned that Singapore’s future is at stake.

Opening borders is also important for flag carriers Singapore Airlines and Cathay as they’ve been reduced to flying at just skeleton capacity because they have no domestic market in which to operate. Last year, the Hong Kong-Singapore route was the 10th busiest internationally in Asia, according to OAG. Both airlines have suffered record losses this year.

Ticket prices have risen in anticipation of the Hong Kong-Singapore bubble. The lowest fares on Singapore Airlines economy class rose to S$678 ($500) for return flights in December, up from S$557 earlier this month, according to the carrier’s website. The airline doesn’t plan to use its Airbus SE A380 superjumbos for flights to and from Hong Kong when an agreement on opening up is reached, Lee said.

Hopes for travel bubbles elsewhere have hit snags. Australia and New Zealand eventually formed a corridor after some setbacks due to virus flareups, only for it to transpire that some passengers flying into Sydney subsequently broke the rules by connecting to other places. The quarantine-free agreement only covers parts of Australia and isn’t reciprocated in kind in New Zealand, meaning it falls far short of initial hopes.

“Singapore is probably among the most pro-active nations in the world when it comes to looking at ways to open up and reduce travel restrictions,” Singapore Airlines Chief Executive Goh Choon Phong said at a post-results briefing on Monday. “This will serve as a very good pilot and example of how we can actually open up travel in a safe manner for everyone.”