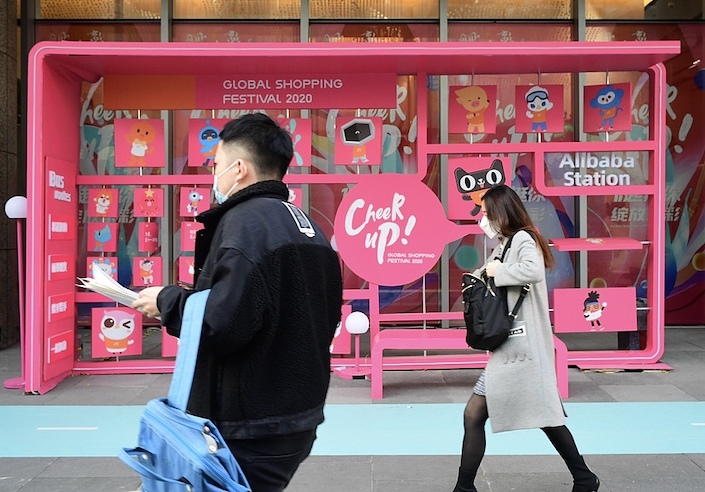 Alibaba is expected to blow past last year’s record $38 billion sales total after the pandemic forced Chinese consumers to become even more reliant on e-commerce.

(Bloomberg) — Alibaba Group Holding Ltd. kicks off the world’s biggest 24-hour shopping binge Wednesday in China, an annual frenzy of consumption for hundreds of millions that this year will also serve as the best barometer so far of China’s post-pandemic recovery.

Singles’ Day debuted in 2009 and has grown over a decade into a nationwide marathon of frantic bargain-hunting that dwarfs sales events like America’s Black Friday and Cyber Monday in intensity and size. This year’s edition features a record number of brand names from Apple to Nike betting that — after months of Covid 19-enforced abstention — China’s 400 million-strong middle class is ready to spend on everything from Hainan beach-side vacations to takeaway coupons and electronics.

Alibaba, Asia’s largest company, is expected to blow past last year’s record $38 billion sales total after the pandemic forced Chinese consumers — who already buy about 30% of the nation’s retail purchases online — to become even more reliant on e-commerce. Homebound consumers turned grocery delivery into the industry’s hottest arena, anchoring an unprecedented surge in online activity during the nationwide lockdown. Domestic travel is accelerating, propping up Alibaba businesses such as Fliggy, while a raft of new smartphones launched during the quarter is expected to tap pent-up demand for electronics.

A strong start to this year’s sales fiesta — also known as “Double 11,” for Nov. 11 or 11/11 — may bode well for China’s economy, providing further evidence that consumer spending, so far a laggard in the recovery, is strengthening.

“Double 11 has historically served as a very accurate indicator for what’s happening in the following year for retailers, brands as well as consumers,” said Jonathan Cheng, head of China retail at Bain & Co. “For this year, with Covid, it’ll become more important. And if you look at China, which is the first one to be coming out of Covid, it’s going to be an indicator for other countries as well.”

The brainchild of Alibaba’s billionaire co-founder Jack Ma and Chief Executive Officer Daniel Zhang, Singles’ Day was intended to be an antidote to the sentimentality of Valentine’s Day. It takes its name from the way the date is written numerically as 11/11, which resembles “bare branches,” a local expression for the unattached. Along the way, the company created the world’s largest shopping festival that helped propel Alibaba into a Goliath.

It’s also become an annual showcase for Alibaba’s cloud services as well as affiliate Ant Group Co.’s Alipay mobile wallet. A record event would be another feather in the cap for Ant, which could do with a win after tightening regulatory scrutiny torpedoed its monster initial public offering last week.

In a nod to the pandemic, Alibaba scaled back on live events this year and is instead relying on increased online promotions such as celebrity livestreams to draw hundreds of millions of shoppers to its e-commerce platforms. Pop star Katy Perry is scheduled to appear at an online event Tuesday. In addition to the usual 24-hour sales period Wednesday, 2020’s event featured a window for consumers to make purchases Nov. 1-3.

Shoppers can purchase heavily discounted goods like cosmetics, clothing and groceries from its Taobao and Tmall platforms and have them shipped via the company’s Cainiao logistics service. They can also book flights to domestic tourist hotspots on the Fliggy travel website. Kaola — purchased from NetEase Inc. last year — is participating for the first time, offering goods from 89 countries.

Foreign consumer brands have long relied on Alibaba to gain access to the Chinese middle class. That’s especially true this year, given how economies elsewhere are grappling with pandemic resurgence. During the first 111 minutes of sales Nov. 1, Nike Inc. and Apple Inc. were among 100 brands that reported 100 million yuan ($15 million) in transactions. Estee Lauder’s flagship store on Alibaba’s Tmall platform was the first to surpass 1 billion yuan in sales, the e-commerce company said. International hotel groups Marriott International Inc. and Accor SA also passed 1 billion yuan in transactions for the first time.

Expectations are high for Alibaba. Revenue in the September quarter grew at the slowest pace on record for the period, with customers putting off purchases in anticipation of deep bargains ahead.

“The performance of Singles’ Day might be a more important benchmark to look at, rather than the third-quarter result,” said Steven Zhu, an analyst with Pacific Epoch.

As with previous years, Alibaba and its e-commerce rivals rolled out ever-larger promotions to entice consumers. Over the entire Singles’ Day event, merchants could end up forking over a record 30 billion yuan in discounts and subsidies to goose sales across Tmall and Taobao alone, CLSA Ltd. analysts led by Elinor Leung estimated.

Those discounts may be the key to enticing consumers, who have only just started to loosen their purse strings, to keep spending. China’s retail sales climbed 3.3% in September from a year ago and growth may have accelerated to 5% in October, as travel and other consumption picked up during the golden week holiday at the start of the month.

But overall retail sales are still down for the year — shrinking about 7% in the first nine months from the same period in 2019. Private consumption accounted for no more than 0.5 of a percentage point of GDP growth in the third quarter, and a full recovery in consumer confidence may come only in 2021, according to Australia & New Zealand Banking Group economist Xing Zhaopeng.

“Singles’ Day should see spending higher than a year ago, but keep in mind retail sales were growing at 8% before Covid-19,” said Shaun Roache, Asia-Pacific chief economist at S&P Global Ratings. “If Singles’ Day is much better than expected, we should watch sales activity closely in December to see if this is a genuine pick-up or consumers are simply stocking up and staying cautious.”