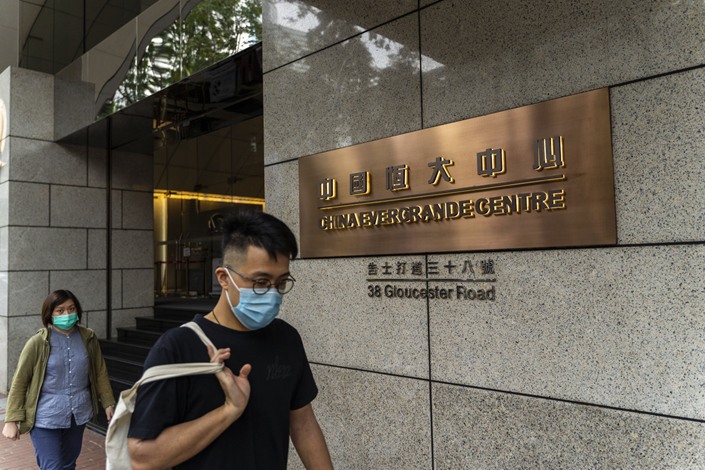 (Bloomberg) — China Evergrande Group has seen a steep drop in its main source of non-bank financing over the past three months, adding to challenges for the embattled developer that just narrowly escaped a full-blown cash crunch.

After going on a debt binge in the trust market through 2019 and this year, that funding pipeline all but dried up in August, according to industry data provider Use Trust. It has been a significant part of Evergrande’s financing, accounting for 41% of its total 799.8 billion yuan ($121 billion) at the end of 2019.

Facing turmoil of its own, Evergrande also finds itself at the center of a crackdown by regulators on the murky world of trust loans, which are funded by pools of capital from mostly wealth investors to invest in property projects. The market has suffered a wave of defaults as China’s economy slowed and authorities sought to rein in speculative housing projects.

“Broadly, the regulators have kept a tight grip over trust fundraising by developers,” said Shuai Guorang, a researcher in the southeastern city of Nanchang at Use Trust. “For Evergrande specifically, financial institutions may have turned more cautious on it due to its recent risk event.”

Evergrande didn’t reply to a request for a comment.

Overall trust fundraising by developers slid in October after policy makers stepped up oversight, but not at the same steep pace as Evergrande, according to the data.

After the trust financing dried up in August, fears were quick to emerge of a liquidity squeeze for China’s most indebted developer, causing its shares and bonds to tumble. The company, controlled by billionaire Hui Ka Yan, has since then been able to reach a deal with investors to waive a looming $13 billion repayment linked to a now canceled backdoor listing in China.

The firm still faces pressure to pare back its $120 billion debt pile. It has raised cash through asset sales and is said to have received approval for a Hong Kong listing of its property management services unit, easing concern about its ability to service its near-term debt.

But in the trust market, the company is facing a new reality. One Zhejiang-based trust firm has imposed a new cap on loans to Evergrande and won’t roll over all its existing loans when they come due, one person said. Any new lending will require higher interest rates and depend on the quality of the underlying project, Bloomberg News reported last month. Another trust firm decided not to work with Evergrande on any new products and will instead focus on ensuring existing products are repaid on time, one person said.

Authorities are keeping a close eye and have asked some of the country’s biggest developers, including Evergrande, to report their financing every month, including their shadow banking activities. Evergrande pared back its reliance on trust funding at the end of last year to 41% from a record 45% six months earlier.

The firm is now looking to broaden its fundraising channels by tapping the nation’s main interbank bond market. It has so far issued yuan bonds only in the nation’s smaller exchange-traded bond market.

Buoyed by asset sales, IPO plans and investors deals, Evergrande’s shares have rallied over the past two weeks, rising 10% this month. Evergrande’s dollar bond due 2025 has risen about 7% from a low in October, but still trades at about a 25% discount to its face value.

“Evergrande’s dependence on trust loan has been declining, although it could go back up if they’re not able to access offshore funding given the high cost,” said Daniel Fan, a credit analyst at Bloomberg Intelligence. In an “encouraging” sign, another developer, Guangzhou R&F Properties Co., was recently able to access the dollar bond market, “albeit at a high cost,” he said.