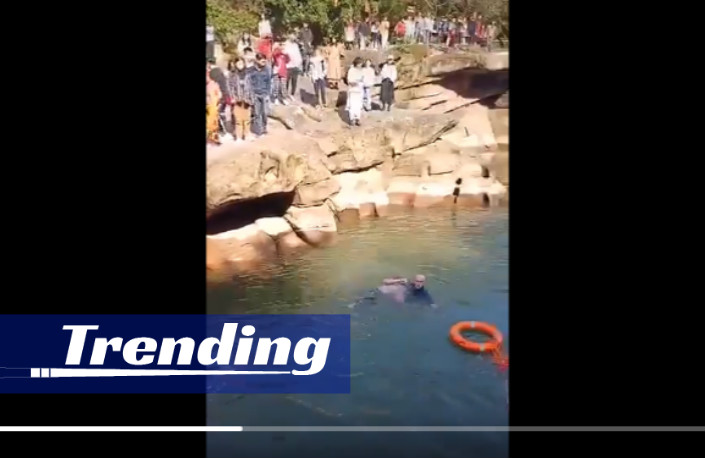 The hashtag #New U.K. consul in Chongqing bravely rescues girl from the water has been viewed 260,000 times on the social media app Weibo. The recently appointed 61-year-old diplomat was filmed jumping into a river to pull a motionless girl to safety.

On Monday, in an accident posted on short video app Douyin, the local version of Tiktok, a girl in red is seen falling into the river at Zhongshan ancient town near Chongqing in Southwest China. The white-haired man who rescued her was identified as Stephen Ellison, the new head of the nearby British Consulate General, in an official Weibo later on Monday, as the British Embassy in Beijing tweeted, “We are all immensely proud.”

On Tuesday, Chinese Ambassador to the U.K. Liu Shaoming forwarded the three-minute video writing, “His bravery…will be known across China.” While other bystanders were seen throwing in a red lifebuoy, no one else entered the water.

Ellison was quoted by local U.K. newspaper The Wilts and Gloucestershire Standard as telling the BBC, “She was unconscious, she was not breathing and for a short time we feared the worst. But as we got back to the side, she started breathing again.”

Ellison had only arrived in Chongqing in October and will be the seventh British consul general in the city. Introducing himself by video on Nov. 6, the former bridge architect expressed his hope that cooperation between the U.K. and Southwest China would continue to bear fruit.

For a social media space used to stories trending with millions of views, this tale of quick thinking and action was not the hottest of hashtags Tuesday. However, many praised the “old man” for going out of his way to help, saying that “kindness knows no borders.” Others suspected that the incident was not as serious as had been made out, saying “It doesn’t look like she’s drowning, merely holding her breath.”

One person said, “This incident is too telling of the situation [in China],” possibly referring to a poor track record for good Samaritan behavior in the country due in part to legal risks. Another pointed to several people caught filming the event instead of helping. One Weibo user thought the incident had a whiff of propaganda about it, “Now, that’s what I mean by a positive take (正气).”