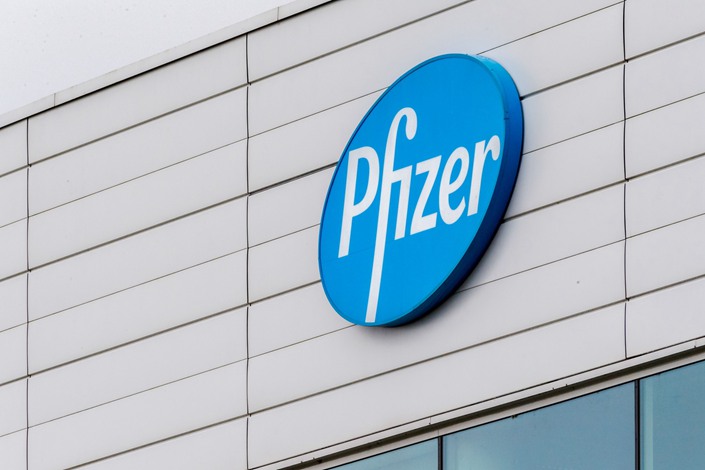 A logo at a Pfizer Inc. facility in Puurs, Belgium, on Tuesday, Nov. 10. Photo: Bloomberg

The Lipitor and Viagra maker is embarking on a strategic shift to maintain growth in the world’s second-largest drug market after China slashed prices for off-patent medicines by more than 90% in some instances.

Some of that growth will come from licensing promising drug and vaccine candidates from local up-and-comers, rather than from its own pipeline, said Christopher Hickey, Pfizer’s Beijing-based senior director for global policy.

“The Chinese biotech sector has significantly expanded in the last several years,” Hickey said in an interview in Beijing on Monday. “The opportunities are simply growing in leaps and bounds in China for those types of partnerships.”

In July, Pfizer entered a deal with vaccine-maker CanSino Biologics Inc. to promote its meningitis vaccine in China, which has yet to secure regulatory approval. Then in September, it invested $200 million in another Chinese biotech, CStone Pharmaceuticals, for a 9.9% stake and licensed its experimental cancer therapy for the mainland market.

This pivot to local partnerships has taken on increasing urgency as western pharmaceutical firms become all but shut out of China’s generic drugs market.

Those plans have been upended since Beijing started driving down the prices of generic drugs through a fierce bidding process for supply contracts to public hospitals. With local makers bidding at prices up to 90% lower for drugs that treat everything from diabetes to schizophrenia, Western pharmaceutical firms have little hope of securing any agreements.

The policy was cited by the company as a major contributor to the 15% — $307 million — drop in Pfizer’s off-patent drugs unit Upjohn’s revenue from emerging markets in the first half of 2020. Upjohn is being combined with Mylan NV to form a new company called Viatris Inc.

Growing replacement by local generic-makers, the aging population and a national epidemic of cancer and chronic diseases makes China “more and more like a developed market,” said Hickey.

“In the context of the challenges that we see here, the value for us and the area of greatest emphasis for us is new medicines that we can bring to China,” he said. “Partnering with local biotechs can help us in that respect.”