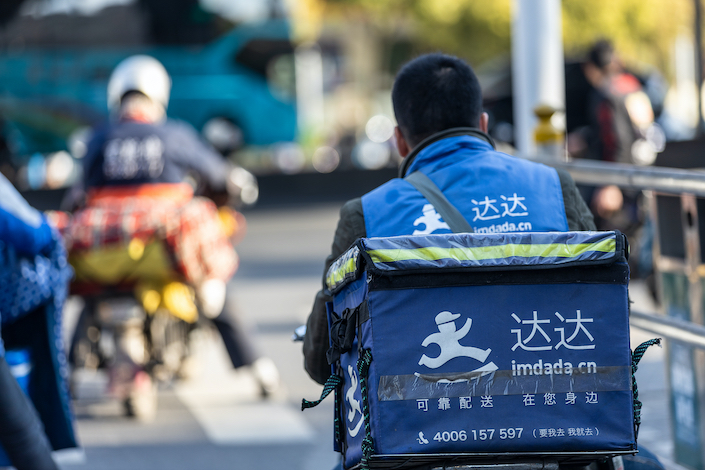 JD.com-backed grocery delivery company Dada Nexus Ltd. recorded robust revenue growth in the third quarter as orders rose, though it remained in the red due to spiking rider costs.

The Shanghai-based company’s revenue jumped 85.5% year-on-year to 1.3 billion yuan ($198 million) in the July to September period, according to its quarterly report released on Thursday.

Revenue from its core grocery delivery platform Dada Now increased by 81.3% year-on-year thanks to rising order volume, accounting for 55% of total revenue. The remainder came from its online retail platform JDDJ , which saw an even higher year-on-year revenue increase of 91%, mainly driven by more customers and bigger average order size.

The two platforms are leaders in their fields, each with a 24% market share in the first nine months of the year, said Dada’s Chairman Philip Kuai in the report.

Banking on promotion from parent JD.com, JDDJ said it had 37.3 million active consumers as of September, up by 5 million from the second quarter of the year.

Dada’s share price has more than doubled since its June IPO on Nasdaq. Its stock rose 5.3% on Thursday before the results came out, and were up another 3.5% in premarket trading on Friday.

But its growing orders have significantly raised its operating costs, especially for riders, with operational costs up 55% year-on-year to 1 billion yuan. That in part led the company to record a net loss of 434 million yuan in the third quarter, narrower than its 685 million yuan loss a year earlier.

Dada said it expects fourth-quarter revenue of between 2 billion yuan and 2.1 billion yuan, in line with analysts’ expectation.