By Ni Dandan and Zhang Shiyu 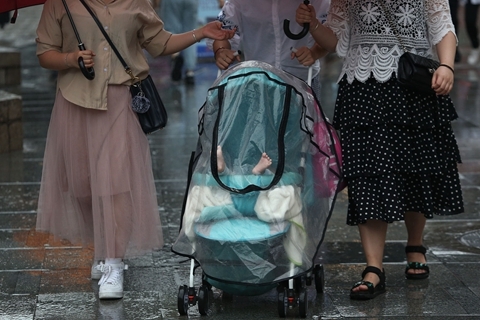 (Sixth Tone) -- When Zeng Yaqin received an instant message in May informing her that her daughter had been born, she felt a complex mix of emotions: elation, but also deep anxiety.

The COVID-19 pandemic was rampant, and she was stuck in her southern Chinese home — over 4,000 kilometers away from her baby in Almaty, Kazakhstan.

The 27-year-old and her husband had turned to a surrogacy agency after they discovered Zeng had a congenital uterine condition that made her unable to conceive. In late 2019, the firm arranged for a Kazakh woman to act as a surrogate, with the couple paying 480,000 yuan ($73,000).

But by the time the woman gave birth, global travel networks had broken down. Zeng found herself cut off from her child and unsure when she’d be able to see her. The agency moved the newborn to a villa in Almaty’s outskirts along with nine other Chinese surrogate babies, hiring local nannies to care for them.

“I can’t concentrate on anything except studying the pandemic situation,” Zeng told Sixth Tone. “But what I read simply makes me even more upset.”

Zeng is far from alone.

China’s ban on surrogacy — introduced over ethical and legal concerns — has fueled the growth of a sprawling global trade in assisted reproductive services over recent years. Agencies have sprung up offering to connect Chinese couples with surrogates all over the world, with Eastern Europe and the United States among the most popular destinations.

It’s unclear exactly how many people in China use these services, but the potential demand is enormous. Infertility issues affect roughly one in eight Chinese couples, or around 50 million people.

But the trade has descended into chaos in 2020, as global travel bans divided families and transformed Russian orphanages into “baby dens” housing dozens of stranded Chinese newborns. And though some countries have tentatively relaxed their border restrictions over recent months, hundreds — and possibly thousands — of infants remain marooned overseas.

Chat groups containing thousands of parents of surrogate children have formed on Chinese social apps WeChat and QQ, where members exchange news on the latest visa policy updates, flight information, and coronavirus infection numbers. While some members have already managed to retrieve their children, many are still unable to do so.

For Zeng, the past six months have been filled with maddening uncertainty. Soon after her daughter’s birth, the Guangzhou native heard from the Chinese embassy in Kazakhstan that negotiations over resuming flights between the two countries had already begun. Yet no such deal has been announced.

When contacted by Sixth Tone, the Kazakh consulate in Shanghai confirmed there were no plans to restart flights between China and Kazakhstan in the near future.

“There have been no notifications from related departments that direct flights will resume — at least, not this year,” a staff member at the consulate said.

It’s a situation Zeng and her husband never envisaged when they started researching surrogacy services in 2017. The couple considered finding a surrogate in the U.S., Russia, Ukraine, and Georgia. They eventually selected Kazakhstan, because it seemed the safest option.

“First of all, the service is completely legal,” Zeng said. “The country is stable and has good relations with China. It has ideal medical resources and nice people.”

After signing a contract with a small Chinese agency with connections in Kazakhstan, the couple flew to Almaty last July. There, they completed the necessary steps for the in vitro fertilization. They chose for the baby to be female.

“As the fetus stabilized in the surrogate mother, I became more eager to meet my baby,” said Zeng. “It was meant to be the happiest year of my life, but it’s turned out to be incredibly stressful and challenging.”

Now, Zeng’s only contact with her daughter is via the videos and photos of the infant she receives every day. The agency has arranged for five nannies to look after the 10 babies in the Almaty villa, which are overseen by two agency staff members. “It’s like a double guarantee,” said Zeng.

The child care is costing the couple 6,000 yuan per month, though Zeng doesn’t care about the high expense. All she’s thinking about, she said, is getting to Kazakhstan as soon as possible.

“As long as I can fly to Almaty, it won’t bother me if I get trapped there because of the pandemic,” she said.

Other parents, meanwhile, are frantically making arrangements to collect their children as countries ease visa and flight restrictions.

Wen Xiaoqi, a 32-year-old from southern China, is currently preparing to fly to Ukraine. Her daughter was born in Kyiv, the Ukrainian capital formerly known as Kiev, in late October.

The Ukrainian government canceled a temporary ban on foreign visitors in mid-June — though the policy was briefly reinstated in late August — and the country has allowed Chinese citizens to visit for up to 30 days visa-free since Aug. 1.

Many families have already taken advantage of these policy changes. One agency based in the eastern Fujian province — which claims to help around 300 couples find surrogates in Ukraine each year — said dozens of its clients had flown to the Eastern European nation since July.

“Around 70 of our customers saw their babies stranded in Ukraine earlier this year,” a consultant at the company who declined to give her full name for privacy reasons, told Sixth Tone. “But most of them have managed to get them back.”

Wen hopes she’ll be able to fly in December. “What’s holding us up is the passport registration service for the baby at the Chinese embassy in Ukraine,” Wen told Sixth Tone. “The earliest reservations available are at the end of December.”

At the moment, Wen’s baby is being kept at a hospital in Kyiv. A local nanny is caring for the child, at a cost of $70 per day. According to Wen, other parents with babies stranded in Ukraine have told her that if she doesn’t arrive in Ukraine soon, the baby is likely to be moved to a local postpartum care center that costs around 15,000 yuan a month.

“To me, the cost isn’t a major concern now — I just can’t wait to see my child,” said Wen. “Other parents who already came back (from Ukraine) said they saw many families with newborns on their flights back to China.”

Wen is worried, however, about the coronavirus situation in Ukraine. Thousands of new infections are being recorded in the country every day.

“It seems the pandemic is getting worse there. I can’t sleep thinking about my own child being over there,” said Wen. “Only people like us, who have children stranded abroad, dare to board international flights right now. We’re risking our health for our children.”

Liu Xian, who is from the northern Shanxi province, is also awaiting clearance to travel abroad. Her baby was born in Moscow in June.

Russia gradually began reopening its borders to foreign nationals in late July, and direct flights between the country and China restarted the same month. Liu’s surrogacy agency told her to begin preparing her application for a Russian medical visa in October, and she’s currently waiting for the visa to be processed.

“In our chat group of nearly 400 people (with surrogate babies overseas), at least 30 of the members said their babies remained in Russia,” Liu told Sixth Tone. “Some are waiting for the visa, and others for flight tickets.”

The 36-year-old said her agency had arranged for the baby to be kept in a rented apartment in Moscow. The child care fees are costing her family just under 20,000 yuan a month, Liu said.

When Sixth Tone called Moscow-based surrogacy agency TDE Overseas posing as a potential client, the company’s founder said dozens of his Chinese clients had traveled to Russia to find their children over the past few months.

“It takes up to two months to obtain a medical visa at the moment,” said the founder, surnamed Leng. “Most of the stranded babies under our care have returned to China. There’s still one baby stuck in Moscow because of the parents’ visa issues.”

Despite all the recent upheaval, Leng claimed his agency is still receiving new Chinese clients. Other foreign surrogacy agencies, however, told Sixth Tone their businesses had drastically declined, as parents turn to China’s domestic black market for assisted reproductive services amid the pandemic.

The Ukrainian surrogacy consultant said the agency had worked with just over 20 Chinese couples in 2020, whereas it typically has around 300 clients per year.

Qiu, manager of a Guangzhou-based agency, said he was now encouraging his clients to seek surrogates within China. Before the pandemic, his business mainly worked with surrogates in Georgia and Kazakhstan.

“It’s more affordable to have a baby through surrogacy in those two countries. In Georgia, the whole process costs around 350,000 yuan, while the price is between 450,000 yuan and 480,000 yuan in Kazakhstan,” said Qiu, who declined to reveal his full name for privacy reasons. “Domestically, it costs around 550,000 yuan.”

Though surrogacy is illegal in China, many agencies like Qiu’s still offer domestic services, forming clandestine deals with local hospitals. If these arrangements are exposed, the companies and hospitals involved can face heavy fines, and doctors sometimes have their medical licenses revoked. The couples that pay for such services, however, are rarely punished.

According to Qiu, demand for domestic surrogacy remains strong. “On average, we have between 150 and 160 babies born through surrogacy every year domestically,” he said. “It’s hard to calculate how many babies are delivered abroad, because we simply connect our clients with overseas agencies.”

Zeng, meanwhile, is taking heart from the recent promising results in the ongoing phase III COVID-19 vaccine trials in the U.S. The parents in her group chat are all hoping a vaccine will allow them to safely collect their children from coronavirus hot spots, she said.

In some countries, direct flights from China aren’t currently available, but it’s possible to travel there via a complex series of connecting routes. Many Chinese parents, however, are reluctant to take this option, as they believe the chances of catching the virus are unacceptably high.

For now, the parents must simply pray for a vaccine to be released soon, and for their children to remain healthy.

“We parents all agree that we won’t risk our babies’ health because of the lack of direct flights,” said Zeng. “All we can do now is wait.”