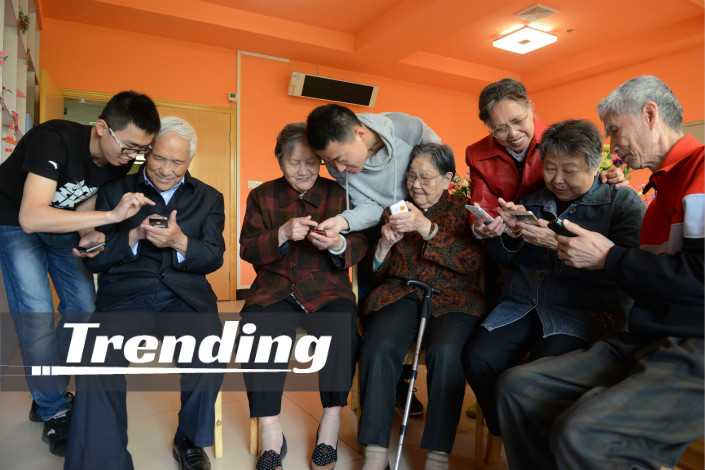 The hashtag #Are the elderly marginalized by technology# is trending on Chinese social media, and the General Office of the State Council is seeking solutions.

Two recent news items raised public concerns over the issue of old people using the latest technology. An old man from Hubei province went to pay for his medical insurance in person only to be told by staff that they do not accept cash.

In another incident of technology seeming to work against old people a 94-year-old man was carried into the office by his relatives so that his face could be scanned as required to activate certain functions of his social security card.

After videos of these two incidents went viral on social media, the General Office of the State Council reminded both institutions and individuals that they cannot refuse cash; scanning the pandemic-era “health QR code” must not be the only way to enter a building; and hospitals must retain a proportion of on-site appointments as well as a human-to-human service window.

Some local departments have taken measures to solve what is increasingly being viewed as a technological divide, for example, Putian No.1 Hospital in Fujian province, set up a staffed channel for those without smartphones or health QR codes so that they could enter the hospital.

Referring to the Hubei cash case, one social media user felt that top down regulations had resulted in “formalism” (形式主义). “The department hasn’t considered the consequence of their rules, and then expects a grassroots officer to carry out orders. Without authorization how can they be expected to be flexible.” And one person said, “It’s ironic that the backdrop of the [Hubei] video is the phrase, “to serve the people.”

Some people offered possible reasons why service windows may refuse cash. “Many organizations stipulate that cash is not accepted, because of counterfeit banknotes and rebates. If cash is received, it will cause a lot of trouble for the grassroots staff,” another popular comment read.

Social media users applaud local policies introduced in response. “It’s not just the elderly. Sometimes young people can’t use smartphones in special circumstances. Such a policy should be widely implemented for everyone’s convenience,” read one comment.