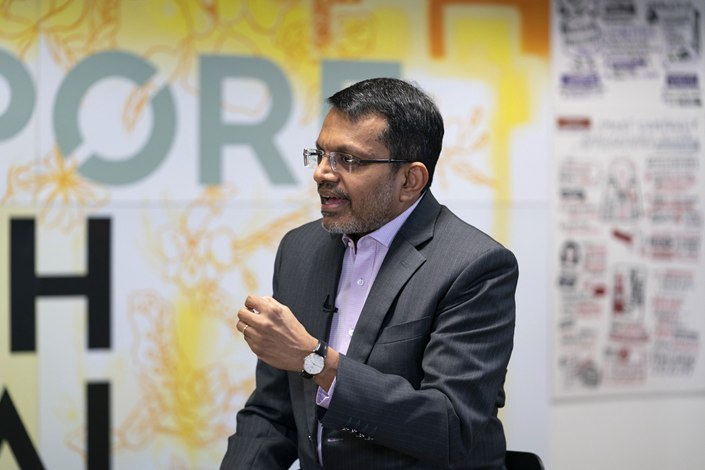 Ravi Menon, managing director of the Monetary Authority of Singapore, gives an interviewe in Singapore.

(Bloomberg) — Singapore’s financial regulator will stick with its plans to award digital banking licenses by the end of the year, undeterred by tightening scrutiny in China and the U.S. that’s hitting major Chinese applicants.

“Regulatory tightening that’s happening in China will not have an impact on the digital banks here,” Ravi Menon, managing director of the Monetary Authority of Singapore (MAS), said in an interview ahead of Singapore’s annual fintech festival that starts Dec. 7. “It’s not our job to try to guess what the geopolitical situation might be like, what actions might be taken by other countries with respect to some of these entities.”

The permits are much coveted by Chinese firms and others, given the city’s status as a regional financial hub and rapidly growing wealth management center. Billionaire Jack Ma’s Ant Group Co. Ltd., among high-profile candidates vying for the permits, shelved its initial public offering after a clampdown and higher capital requirements imposed by Chinese regulators. As many as five licenses will be awarded from a list of 14 eligible candidates.

Bytedance Ltd., whose joint venture is another contender, has been hit by the U.S. government’s order to sell its TikTok video app.

Singapore has its own requirements for digital bank licenses that include the ability to provide good services with appropriate risk management, as well as a smooth exit strategy, Menon said, without confirming the identities of any applicants.

The MAS is taking a progressive approach in regulating such firms, such as by restricting their ability to take deposits initially, before giving them permission to operate more freely once they prove profitability over time, Menon said.

“China started from a different place — initially it did not regulate many of these fintech entities to the full extent,” he said. “And now the authorities are converging to the same position as most of the rest of the world. I think that’s the right thing to do, and it creates a level playing field.”

Asked whether government relationships would play a role in the regulator’s decision making on digital-bank licenses, Menon ruled out any favoritism and said it is “strictly merit-based.”

TikTok, one of the world’s most popular apps, got a two-week extension on a Nov. 12 deadline to sell its American business as the U.S. gauges whether it poses a threat to national security.

“MAS would need to balance these considerations against the implications of the shifting China-U.S. relations and recent regulatory developments in China,” said Wong Nai Seng, a partner at Deloitte in Singapore, who worked at MAS for more than 17 years. “Ant Financial and ByteDance are major technology companies with strong track records in technical capabilities and innovation.” They’ve made “significant investments” in Singapore, he said.

Earlier this year, the MAS postponed its plan to award digital-banking permits to non-banks from June due to the global Covid-19 outbreak.

Now, the virus is accelerating the switch to digital banking. Menon said the number of brick-and-mortar bank branches and office space may become smaller over time, with their role changing from one focused on processing daily transactions to things like advisory services on investments.

“The digitalization agenda has been given a real shot in the arm by Covid-19, and some of this change is really permanent,” he said. “Face-to-face interactions will be based on much higher-value activities and transactions.”