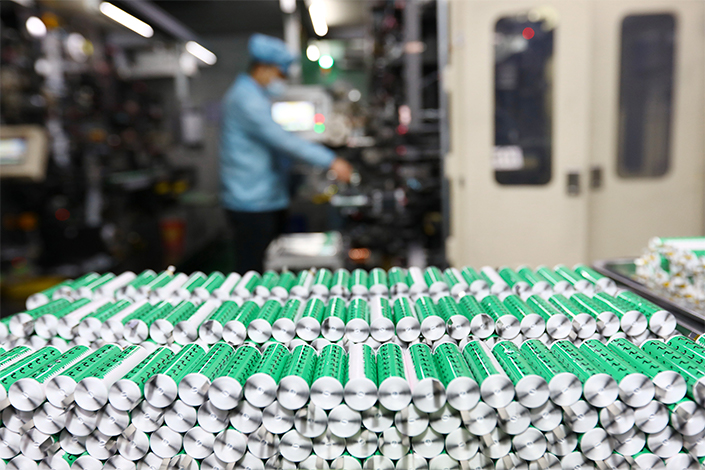 (Nikkei Asia) — Lithium is a necessary component for batteries to power everything from smartphones to electric vehicles. Even though China is ahead of the curve in this key sector, Tianqi Lithium, one of the largest global lithium producers in China, is on the brink of defaulting on a loan worth $1.8 billion.

The company is in dire financial straits, at a time when the industry is heading for a bright future with powerful policy support.

The Shenzhen-listed Tianqi said in its latest disclosure on Wednesday that it has officially submitted a request to amend the terms of the U.S.-dollar-denominated loan, but it is “still in the process” of negotiating with the syndicate led by state-owned Citic Bank. Tianqi’s board warned investors that there is a “possibility of a default” if the talks fall through. As of the end of September, the Sichuan-based company had only 1.294 billion yuan ($197 million) in cash holdings.

The company vowed to make a timely disclosure to the exchange, if there is “renewed development” on the matter. Besides its negotiation with the banks, the company is pinning hopes on inviting strategic investors or other forms of funding to bail itself out of the financial mess.

The debt in question is a direct result of a headline-grabbing acquisition of its Chilean competitor SQM made two years ago. Tianqi paid $4 billion to purchase 23.77%, or 62.5 million shares, from Nutrien, a Canadian fertilizer conglomerate formed by a merger of Agrium and PotashCorp. The divestment from SQM was one of the conditions of the merger, and Tianqi took the opportunity to auction off a non-controlling stake with a 46% premium. Including its holdings through its Hong Kong subsidiary, Tianqi now owns 25.86% of SQM.

“A minority stake in SQM is great from our perspective, especially when we look at long term growth and expectations for the lithium industry,” said Ashley Ozols, business development manager at Tianqi, immediately following the closing of the deal in December 2018.

Tianqi became the largest shareholder, but various restrictions were imposed on them, as serious concerns were raised in Chile. SQM management appealed the issue of bringing one of its major global competitors to gain a fourth of its shares and grab three seats on the board. The Chilean antitrust regulator stepped in and an agreement was later reached with Tianqi, where the Chinese company was limited to access certain “sensitive” information at SQM, in order to maintain competitive conditions in the lithium market.

Not only being restricted in its rights as a major shareholder, the acquisition brought along heavy financial burdens for Tianqi. The deal was mainly financed through a $3.5 billion syndicated loan led by Citic Bank, including $1.8 billion that has to be repaid by Monday. In 2019, the new loan added 1.65 billion yuan in interest for the company, while an impairment provision of 5.2 billion yuan was recognized due to the fall in price of SQM shares, which are listed in New York.

On top of the 22% drop in revenue to 4.84 billion yuan last year, Tianqi recorded a 5.98 billion yuan in net loss, from a 2.2 billion yuan in profit from the year before. The auditor issued a “qualified opinion” in the company’s annual report in 2019.

The acquisition has directly affected its credit rating as well. Moody’s Investors Service announced it was reviewing the investable Baa3 ratings in May 2018 when the acquisition was first announced, and downgraded it to junk status in June 2019. The subsequent deterioration of its financial conditions spurred the rating agency to pursue a series of downgrades to the current Caa1, meaning the issuer is in “poor standing and subject to very high credit risk,” according to Moody’s definition.

Gerwin Ho, Moody’s senior credit officer, confirmed on Nov. 20 after a periodic review of Tianqi that its current rating is a reflection of the company’s “highly strained capital structure as a result of its high debt burden, elevated leverage and weak liquidity.” These factors “have increased refinancing risk” of loan repayment especially that associated with the acquisition of SQM.

The financial fragility of the company does not stop there. Apart from the loan due on Monday, Tianqi has over 3 billion yuan of debt to repay within a year, according to the company’s disclosure on Wednesday in the form of an official reply to questions raised by Shenzhen Stock Exchange. In addition, there is more than 13 billion yuan in long term loans and a $300 million dollar-denominated bond that matures in November 2022.

Moreover, the company now expects a full-year net loss for 2020. On top of the heavy interest expenses and impairment provisions of previously acquired assets, the company blames a decrease in both volume and price of lithium, despite the global hype for electric vehicles and Beijing’s renewed push to support the proliferation of new-energy vehicles.

If the company records another annual loss this year, it will be put under probation by the stock exchange, where its daily stock price movements will be limited to 5%, down from 10%. The company will be delisted if it records a third straight year of net loss in 2021.

Jamie Wang, analyst at Nomura based in Hong Kong, cut his earnings forecast for this year and the next. He expects a net loss of 1.1 billion yuan in 2020, while projects to turn to profit of 218 million yuan in 2022, but less than half of the previous forecast.

Wang, one of the few remaining equity analysts left to cover Tianqi, sees lower lithium shipments and delayed capacity expansion in its Australia joint venture. While its competitors increased their revenue during the third quarter, Tianqi’s dropped by 55% year-on-year, which “we believe was mainly due to customer losses,” Wang wrote in a note on Nov. 19.

The company’s problems are not limited to its financial woes brought about by the costly acquisition. Wang maintains a “reduce” rating and cut the target price to 12.4 yuan, less than half of Friday’s close of 25.97 yuan.

What is the likely outcome of the crisis? James Shi, distressed debt analyst at Reorg Research, told Nikkei Asia on Friday that extension of the loan carries “higher possibility” than the other options. For one thing, the lithium industry is strategically important, and the company has a majority holding in the world’s largest lithium mine in Greenbushes, Western Australia.

In addition, it would not be acceptable for Citic Bank and other banks in the syndicate, including Industrial and Commercial Bank of China (ICBC), China Minsheng Bank, and two French banks — BNP Paribas and Societe General — to have this amount of non-performing loans officially created by a default.

However, Shi points out that the conditions will get tougher, where the extension period will not be long and coupon will be higher.

Alex Payette, the founder and CEO at Cercius Group, said he would expect an extension of the loan for similar reasons. The Montreal-based research and consulting firm calculates the chance of Tianqi being saved from default at a bit higher than 50%, based on its proprietary analysis including political connections of the company with the Chinese Communist Party and the state. Payette is tilted toward it being secured, because “Tianqi Lithium would be considered a critical asset for the Party, given the strategic importance of lithium as a commodity and resource.”