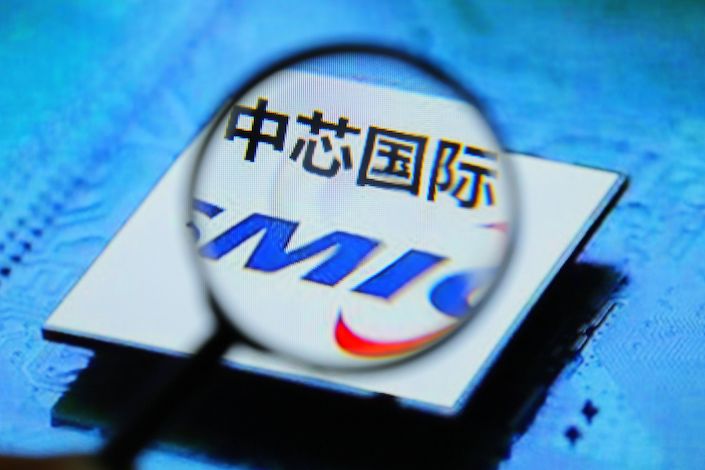 (Bloomberg) — The Trump administration is poised to add chipmaker SMIC and offshore oil-and-gas explorer CNOOC to a list of Chinese businesses blocked from American investment because of alleged military ties, Reuters reported, in the latest U.S. swipe at Beijing before President-elect Joe Biden takes office.

Semiconductor Manufacturing International Corp. and China National Offshore Oil Corp. are among four Chinese companies to be added to a list of enterprises said by the American government to be owned or controlled by the military, Reuters reported, citing a document and three unidentified people familiar with the matter. Their addition — along with China Construction Technology Co. Ltd. and China International Engineering Consulting Corp. — would bring the total of businesses on the blacklist to 35.

It wasn’t clear when the new list would be published in the Federal Register, Reuters said. The Defense Department didn’t respond to Reuters’ request for comment.

“There will be a huge impact on the company because the oil-and-gas value chain involves a lot of U.S. companies from upstream, mid-stream all the way to the gas side,” said Sengyick Tee, an analyst with SIA Energy. “This also means they cannot procure parts and software from U.S. companies.”

A Pentagon spokesperson didn’t immediately reply to Bloomberg’s request for comment on the report. Reuters separately reported last week that the Trump administration was close to issuing a list of 89 Chinese aerospace and other companies that would be barred from accessing U.S. technology exports because of alleged military ties.

President Donald Trump, a Republican, has continued to roll out punitive measures against China after losing the U.S. presidential election earlier this month to Biden, a Democrat. The actions will make it harder for the incoming administration to de-escalate tensions with Beijing, although they will also arguably give the U.S. side more leverage in future negotiations.

The Chinese Foreign Ministry said it opposed politicizing cooperation between the two countries.

“We hope the U.S. will provide an open, fair, and nondiscriminatory environment for Chinese businesses working in the U.S. instead of stretching the concept of national security and imposing sanctions or discriminatory measures on Chinese companies,” ministry spokeswoman Hua Chunying said Monday.

In a related executive order earlier this month, the Trump administration said China was “increasingly exploiting” American capital for “the development and modernization of its military, intelligence, and other security apparatuses,” posing a threat to the U.S. That order prohibits investment companies and pension funds from buying and selling shares of 31 Chinese businesses designated by the Pentagon since June as having military ties.

State-owned CNOOC, the country’s main deep-water oil and gas explorer, has ties to key global energy producers and projects. The company is among Exxon Mobil Corp.’s partners in a Guyana project, owns a stake in a Royal Dutch Shell Plc LNG export terminal in Australia, and has a share of the U.K. North Sea’s Buzzard oil field.

CNOOC’s main base of operations is the coastal waters surrounding China, which account for more than 60% of its listed company’s production, with the majority coming from the Bohai Sea near Beijing.

“It will be quite negative for CNOOC as it has quite a few U.S. partners in projects alongside Bohai Bay as well as in the South China Sea,” Lin Boqiang, director at the China Center for Energy Economics Research at Xiamen University, said by phone

Operations in the South China Sea, which account for about 29% of output, have at times run into controversy because China claims drilling rights in waters far from its borders and within 200 miles of countries like Vietnam and the Philippines. The company also owns interests in shale and deep-water projects in the U.S., accounting for production of about 67,000 barrels of oil equivalent a day, according to its website.

SMIC said in a statement that it is engaged in constructive discussions with the U.S. government and that it has no relationship with the Chinese military and doesn’t manufacture for military uses. Its shares were little changed in Hong Kong.

In September, the U.S. Commerce Department separately imposed export restrictions on SMIC, requiring American businesses to apply for a license to send certain products to China’s largest chipmaker. SMIC and its subsidiaries present “an unacceptable risk of diversion to a military end use,” the department’s Bureau of Industry and Security wrote.

SMIC represents a cornerstone of China’s vision of creating its own, world-class semiconductor industry, which the Communist Party sees as an essential foundation for a self-sufficient technology sector. The company is the country’s biggest contract manufacturer of integrated circuits and raised more than $7 billion in a July Shanghai stock offering to expand.

SMIC still has far to go to catch up with rivals such as Taiwan Semiconductor Manufacturing Co., which makes chips for Apple Inc.’s most advanced smartphones. TSMC, the world’s largest contract chipmaker, is commercializing technology at least two generations ahead of SMIC’s capabilities.

A Trump administration blacklisting would make that effort more difficult — if not impossible — because SMIC could be barred from American suppliers such as Applied Materials Inc., which tend to make the most advanced chip-making equipment.