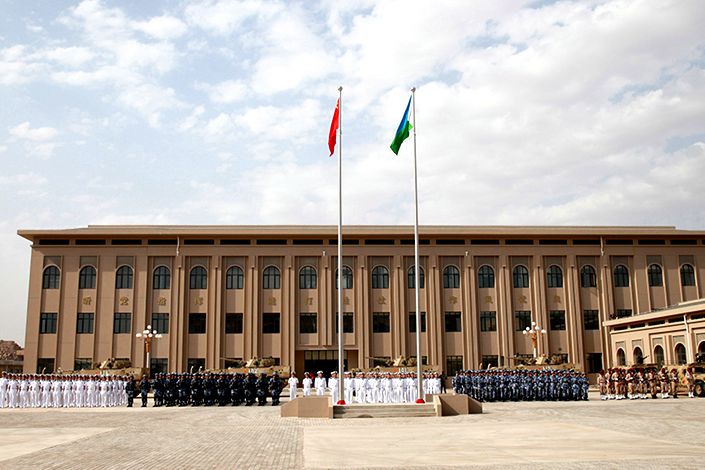 The Chinese People's Liberation Army support base in Djibouti.

The global implications of the United States electing a new president are always huge. This time around, with the replacement of Donald Trump by Joe Biden, the Middle East is one of the regions where the changing of the guard may be felt most powerfully.

The region was, for Trump, something of a focus in foreign policy. He has spent a lot of energy on it. Things will now change, but not, perhaps, as radically as some may expect.

America’s interests in the Middle East are not what they once were, regardless of who is president. Less reliant on oil from the region, the United States has, through both the Obama and Trump administrations, become less interested in the region’s geopolitics as its energy reliance has waned. As I write, further troops are being withdrawn.

This trend became particularly obvious under President Trump. It is worth remembering that his first foreign port of call after being elected was Saudi Arabia. He has turned Arab-Israeli politics upside down with his co-called “Deal of the Century,” which has so far brought two Gulf states to recognize Israel, but created quite a lot of anxiety along the way via the move of the U.S. Embassy to Jerusalem and the acceptance of further Palestinian land annexation. And his administration has played hardball with Iran, dismissing the nuclear deal of Trump’s predecessor and imposing sanctions again.

With this as a backdrop, the next few months ― until the Jan. 20 inauguration ― will be a period of increased volatility for the region. Trump remains president and can use his presidential powers to take actions without scrutiny from Congress.

Accordingly, there is room for radical moves against Iran and its areas of interest in the Middle East, notably Syria, Lebanon, Iraq and Yemen. It will be a period of augmented risk.

More benignly, the momentum that has normalized diplomatic relations, via the Abraham Accords, between Israel and Bahrain and the United Arab Emirates, will most likely continue, but possibly at a slower pace under the Biden administration. Qatar could very well be next between now and inauguration day, and Sudan is in the wings.

“How Chinese foreign and investment policies in the MENA region are formulated and implemented, going forward, will make the difference between a promising China century and a fraught one.”

After January, I look for the Biden presidency to take something of a middle ground between Trump’s sometimes bellicose disruption tactics and Barack Obama’s idealistic desire to see rapid liberalization, democratization and better respect for human rights in the traditionally authoritarian Middle East and North Africa (MENA).

So where Trump showed little reaction to the murder by Saudi officials of journalist Jamal Khashoggi, in similar circumstances the Biden administration would be more outraged. And there is likely to be more scrutiny of U.S. arms sales to Saudi Arabia under Biden while the Yemen disaster persists, in contrast to the open supply of arms under Trump.

Overall, the authoritarian regimes of the MENA region are likely to have less support from Biden than they did from Trump. But Biden is probably going to be less interested than Obama was in trying to make the Middle East a “better place.” He will be much more sanguine about what is feasible in the region during his term, and he could well be the president who finally seals the disengagement between the United States and MENA, treating the area as just another region in the world.

This implies that the level of priority for the Middle East, on the U.S. foreign policy agenda, will fall. As elsewhere in the world, this will open the door to more influence from China, directly and indirectly, as various Middle East files drift sideways.

Independently of the Belt and Road Initiative, but certainly if it suffers no loss of momentum post-pandemic, the investment and financing implications of the situation above make room for a clear start to what I am calling the China century in the Middle East. Today, the Belt and Road already runs through the Middle East. How Chinese foreign and investment policies in the MENA region are formulated and implemented, going forward, will make the difference between a promising China century and a fraught one. But this new century has now begun.

An exception to the Biden approach to the region will be Iran. He is set to reverse a number of isolationist Trump policies, including the latter’s rejection of the Iran nuclear deal.

It is clear that Biden would like to return to at least some of the conditions associated with the deal, not least the ones that prevent Iran from going forward with a nuclear weapon. It is not clear, however, whether Tehran will be interested by the same terms. The conservative Iranian regime, quite close to electing a hardline conservative president, is going to be very careful about returning to the negotiating table with the United States at this time.

Iranian hardliners ― like their U.S. counterparts ― did not like the nuclear deal. The population of Iran, worn down by sanctions, would like it reinstated, and hope around the deal could influence their vote for president next summer in a major way.

Additionally, there is the ballistic missile program, and also Iran’s thorny regional role, two items that were left out of the nuclear deal but which both sides of the aisle in the U.S. House of Representatives would have liked included in the deal. Europe, in its heart, would have liked to see that too. Taken together, this means that returning to the deal with Iran or striking a new one is going to take more time than the repealing of some of the other decisions made by the Trump administration.

In the meantime, the Middle East is braced for a bumpy ride till Biden is inaugurated in January, with no promise of a less bumpy one after that. China has the opportunity to offer stability, most significantly in areas such as investment and bilateral finance. But this opportunity will be navigating continuously choppy global waters on every journey toward the region.