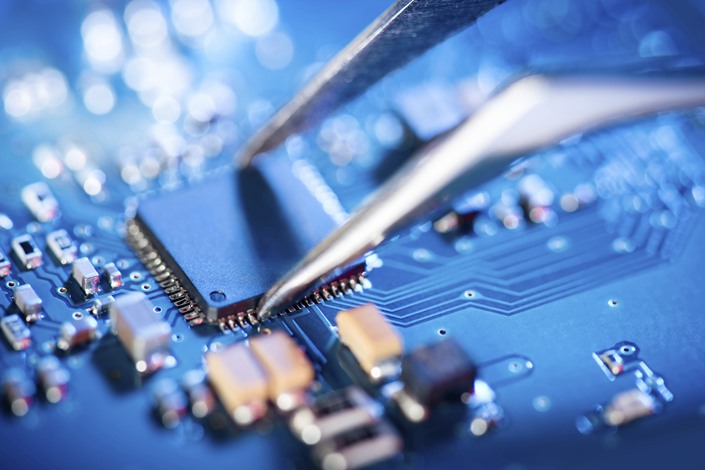 China's top Bluetooth audio chip developer is set to raise 4.86 billion yuan ($741 million) in an initial public offering in a sign that Beijing's efforts to boost its domestic semiconductor industry are continuing to bear fruit despite the ongoing tensions with the U.S.

Bestechnic plans to list on the Shanghai STAR market, a tech-focused board that serves as China's answer to Nasdaq in the U.S. A price of 162.07 yuan per share was set in the early hours of Wednesday, valuing the Beijing-backed startup at approximately 19.44 billion yuan. The IPO is expected sometime later this month.

Though it is little known outside the industry, the 5-year-old chip developer is already serving top global customers like Samsung, Sony, Google and JBL, as well as almost all of China's tech giants, from Xiaomi and Huawei to Alibaba and Baidu, according to the company's prospectus.

Bestechnic's shipments of Bluetooth audio chips for so-called true wireless earphones are larger than those of U.S. rivals Qualcomm and Broadcom, according to data provider Sunshine Media. "True wireless" means there is no wire connecting the two earphones, as each has its own Bluetooth chip.

Liang Zhang, Bestechnic's chairman, told an investors conference on Wednesday that his company ranks No. 1 among non-Apple suppliers of Bluetooth audio chips. "We see the true wireless earphone market growing very quickly in the coming years and we are positive about the growth opportunities next year and in 2022," Zhang said. "Currently our company does not see any obvious impacts caused by the U.S.-China tech and trade conflicts."

Zhang also confirmed that the company has applied for U.S. licenses to resume shipping to Huawei. The Chinese telecom equipment and smartphone maker, however, has accounted for relatively little of Bestechnic's revenue because Huawei tended to use in-house chips, the company said in the prospectus.

The success of Bestechnic brings China a step closer to its ambition of creating a self-sufficient chip industry capable of providing all of the components needed to produce electronic devices. As tech tensions with Washington drag on, Beijing has started to become more selective about which chip projects it backs, warning that weaker companies will be left to fail or merge with rivals.

The country is home to many of the world's leading true wireless earphone builders, including Xiaomi, Amoi and QCY, which Counterpoint Research has ranked second, sixth and seventh globally by shipments. It also has the emerging audio brand Anker Innovations, which listed in Shenzhen in August, as well as many little-known unbranded players.

Apple, who kicked off the boom in true wireless headphones with the launch of its AirPods lineup in 2016, still dominates around 45% of the global market. Apple develops its own Bluetooth audio chips.

Bluetooth is not a new technology, but the boom in wireless audio devices, from earbuds to voice-activated speakers, has turned it into a rapidly growing segment. The world's true wireless headphone market will see a compound annual growth rate of 80% from 2019 through 2022, according to a Counterpoint forecast, much higher than smartphones and computers.

Bestechnic was founded in 2015 by a group of executives and engineers from RDA Microelectronics, a New York-listed Chinese chip developer that was privatized by the Beijing-backed tech conglomerate Tsinghua Unigroup. RDA was later merged with Spectrum Communications to become mobile chipmaker UNISOC. Bestechnic Chairman Zhang is a former vice president of RDA and worked with U.S. chipmaker Marvell early in his career.

Bestechnic has many big-name investors, including Xiaomi and Alibaba, as well as the government-backed Beijing Integrated Circuit Design, Packaging and Testing Investment Center. Unlike some chip startups that take a long time to begin generating profits, Bestechnic's net income grew 16.03% on the year in the first six months of 2020, though net profit growth and revenue growth were both slower than the same period a year ago, the company said in its prospectus, without elaborating.

Nikkei Asia in September last year was the first to report that Bestechnic was eyeing a listing on the Shanghai STAR board.

Bestechnic warned in its prospectus that it still relies on foreign chip design tools and semiconductor intellectual property providers such as Cadence and Arm to develop chips, and that geopolitical tensions could create uncertainties for its business. "The company is selling to many overseas clients besides domestic ones. If there are any trade barriers coming up in the future, that would cause a negative effect on the company, too," the prospectus said.

Donnie Teng, a semiconductor analyst with Nomura Securities, said Chinese chip developers could enjoy a new round of opportunities after the country's top chip designer, HiSilicon Technologies, Huawei's semiconductor arm, was banned from using any U.S. technology to produce its chips.

"If HiSilicon continues to be restricted, Hisilicon's market share in chip design in China -- around 30% -- is likely to be shared by multiple China [integrated chip] design companies," Teng said. "That would give many rising stars building chips for TVs, surveillance cameras, setup boxes and wireless connectivity some new chances to grow."