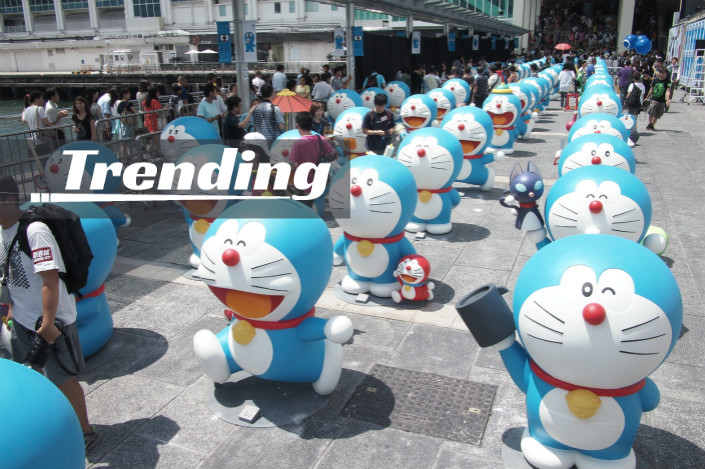 An online petition started in Japan about the apparent inappropriate sexual behavior of a character in the popular animated Manga TV series Doraemon has attracted the attention of Chinese social media and sparked discussions on the limits of acceptable behavior for cartoon characters.

According to Japanese media, a Japanese viewer made a request to TV Asahi, a Japanese television network, and the Doraemon production company to delete a scene from the popular cartoon of the leading man Nobita sneaking into the leading woman Shizuka’s bathroom. The complainant believed that the scene may normalize inappropriate behavior and encourage spying on women in real life. In addition because the cartoon appeals to children it may be particularly harmful to vulnerable minors.

While the Japanese online petition has caught the attention of both Chinese and Japanese social media in the last few days the scene was originally aired around the world over a decade ago with some Chinese viewers complaining about it at the time. The Chinese viewers, who were mostly parents, also called for the scene to be pulled.

As a popular cartoon in China, Doraemon is a major part of many Chinese people’s childhood. News of the Japanese petition quickly trended on Weibo and generated over 20,000 comments. Most people expressed their support for the Japanese petition and the demand that the scene be pulled. “I agree. Many men do not respect women and even hurt them. Although this request may be a fuss, at least it won't encourage bad habits.”

The weight of support for the Japanese petition reminded some people of similar petitions by Chinese parents before, which caused an opposite reaction. “I remember that in the past few years, a Chinese parent also reported this scene. But at that time, people said he had overreacted,” one comment read.

While some people still feel that deleting the scene is unnecessary, as they believe that people cannot be so easily influenced by one bad scene in a cartoon, others have suggested a compromise. “Just add a notable explanation in the clip: this behavior is illegal! Imitation will lead to prison! Perhaps it is more useful than deleting it,” another popular comment read.