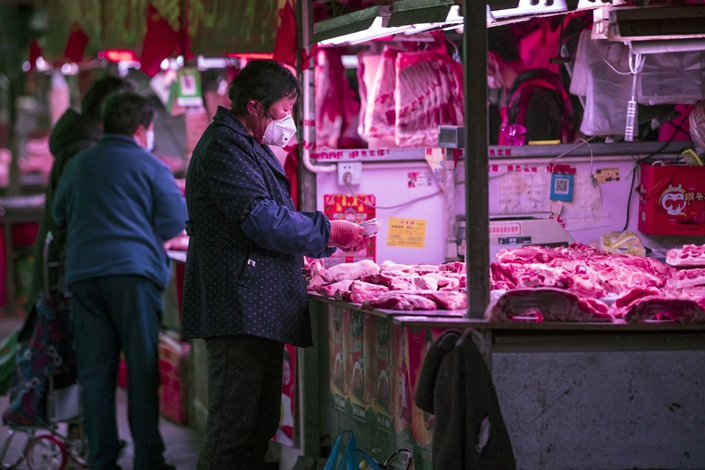 A vendor wearing a protective mask counts Chinese yuan banknotes at a market stall in Shanghai on March 13. Photo: Bloomberg

(Bloomberg) — Pork prices have rebounded in China as demand strengthens before a major holiday season and supply tightens because of a virus-linked crackdown on imports.

Wholesale pork prices jumped almost 6% in the first week of December from a week earlier to 41.98 yuan ($6.41) per kilogram, posting the biggest gain in a year, according to data from the commerce ministry. Prices climbed a further 0.8% in the week ended Dec. 13. If sustained, this has the potential to push up consumer prices, which last month slipped into deflation.

The price surge is driven by increased demand for cured and preserved meat, which is typically made during winter ahead of the Lunar New Year, according to Zhu Zengyong, a researcher at the Chinese Academy of Agricultural Sciences. Some restaurants are using more domestic pork because of concerns over the safety of imported meat, he added.

China has rolled out mass-testing of all inbound frozen food shipments after reports of coronavirus traces on imported food and packaging. The move has led to severe congestion at ports, lengthy customs clearance times and spurred predictions that China’s meat imports could plunge as much as 30% next year.

Several cities, including Hubei’s Xiangyang and Jiangsu’s Wuxi, have asked local markets to remove imported meat from the shelves and seal them for testing, according to domestic media reports.

Two dozen residents in Hubei’s Huangzhou district were initially fined for purchasing imported cold storage food online, but the penalty was later revoked, with the local government pledging to carry out “normal” epidemic control work in accordance with the law.