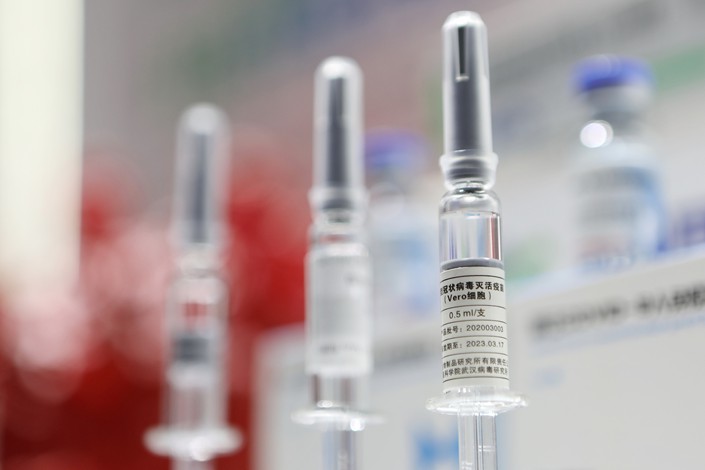 Interim analysis of Phase III clinical trials showed that the vaccine is safe and that people who received two doses produced high levels of antibodies, according to a statement published Wednesday by Beijing Biological Products Institute Co., a subsidiary of CNBG’s parent Sinopharm.

The vaccine has already been administered to nearly 1 million people under an emergency-use program in place since mid-year. That has raised concerns among scientists of potential risks in using shots whose safety has yet to be thoroughly studied.

It’s not clear when China’s regulators will act on approving the vaccine for general use, but the company said it has begun to deploy capacity and distribution. According to guideline on Covid-19 vaccine evaluation released in August by the National Medical Products Administration, a vaccine that has shown acceptable effectiveness in Phase III trials can seek conditional approval while completing clinical tests.

CNBG didn’t disclose details of its Phase III clinical trials, such as participants’ ages and numbers and how many confirmed infections were observed.

The vaccine meets the standards of the World Health Organization and China’s own regulator, the National Medical Products Administration, the company said. It acknowledged its shot is less effective than inoculations developed by Pfizer Inc., BioNTech and Moderna Inc., which are more than 90% effective.

The vaccine’s efficacy rate is also lower than was reported from its trials in the United Arab Emirates, which put the protection level at 86%.

A state-owned drugmaker that has a dominant share of China’s vaccine market, CNBG in April was among the world’s first to push experimental shots to the final stage of human testing. The company’s research institutes developed two shots using an inactivated version of the virus to stimulate immune response, an approach widely adopted by many of the existing vaccines used to prevent illnesses around the world.

Such vaccines have the advantage of easier storage and distribution as they don’t need to be frozen at super-cold temperatures — unlike the mRNA vaccines developed by Pfizer-BioNTech and Moderna. CNBG’s shots can be stored at normal refrigerator temperatures, making distribution to rural areas and developing countries easier.

But inactivated vaccines have strict requirements for their production environment. The antigens needed to produce such vaccines need to be cultured in a highly secure P3 laboratory, which enables the isolation and manipulation of dangerous biological materials for research.

In the early stage of inactivated vaccine research in China, the vaccines were produced with support from the Chinese Center for Disease Control and Prevention before vaccine producers built their own P3 lab-equipped facilities, Caixin learned.

CNBG has vaccine supply agreements with several developing countries including Malaysia, Brazil, Pakistan and the UAE. Leading Western developers like AstraZeneca and Pfizer have inked agreements with far more countries.

Bloomberg contributed to the report.