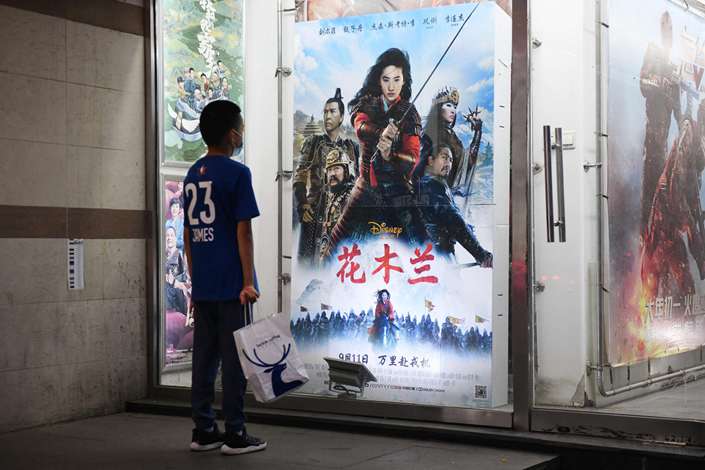 A boy looks at poster of the Disney movie "Mulan" outside a cinema on the day it opened in Beijing on Sept. 11,. Photo: Bloomberg

(Bloomberg) — Box office collections by foreign films in China more than halved in 2020, posing a tough challenge for Hollywood in one of the few major markets to be recovering from the pandemic.

In the year China took the crown from the U.S. as the world’s No. 1 movie market with a revenue of 20.4 billion yuan ($3.2 billion), overseas films accounted for only 16% of the ticket receipts. That compares with 36% in 2019, according to data from local ticketing platform Maoyan Entertainment.

After China aggressively contained the virus within months, movie theaters on the mainland reopened as early as mid-July, offering a bevy of local fare including the world’s top-grossing movie last year, “The Eight Hundred,” a historical war drama. In contrast, the U.S. and Europe are still struggling to contain the pandemic. Lockdowns are back in many countries as infections and deaths surge, keeping cinema halls shuttered and delaying Hollywood productions and releases.

“China is the fastest to walk out of the pandemic impact and Chinese people are very willing to go out and watch movies in cinemas,” said Wilson Chow, global technology, media and telecommunications industry leader at PwC China. “Hollywood released fewer blockbusters last year, so its level of appeal to Chinese viewers has become lower.”

The pandemic also “half-paralyzed Hollywood’s studios,” Chow said. Fewer big releases in China meant a smaller share in the their box office revenue. Films like “Minions: The Rise of Gru” and “Black Widow,” for instance, were pushed to this year.

Foreign films are also at a disadvantage in China as authorities keep a tight control over the number of imported movies. A World Trade Organization memorandum in 2012 expanded the annual target for foreign titles imported into China to 34 from 20. There are also blackout periods for overseas films during peak seasons.

Local movies accounted for 84% of China’s box office revenue in 2020, bulking up from 64% in 2019. Chinese studios produced four of the 10 biggest titles, including “The Eight Hundred,” according to industry data tracker Box Office Mojo. On the other hand, several of Hollywood’s highly anticipated, big-budget films flopped in China or spent time fire-fighting some public relations fiasco.

Walt Disney Co.’s fantasy-action drama “Mulan” stirred up controversy for its portrayal of Chinese culture and came under fire for filming in China’s Xinjiang region, where Beijing is accused of oppressing Muslim-minority Uighurs. Beijing denies these allegations.

“Monster Hunter,” directed by Paul W.S. Anderson and backed by Sony Corp., was pulled from some cinemas in China after some viewers criticized a scene for being racist. Its co-producer apologized and edited out the controversial line that, according to some viewers, was similar to a playground taunt against people of Asian descent for supposedly being dirty.

The recovery of the industry in China has also spurred a rally in some of the local film stocks. Wanda Film Holding Co. has advanced 26% since July while Beijing Enlight Media Co. and Huayi Brothers Media Corp. gained 9% and 13%. Each of these three companies saw their shares plunge in the first six months of 2020.