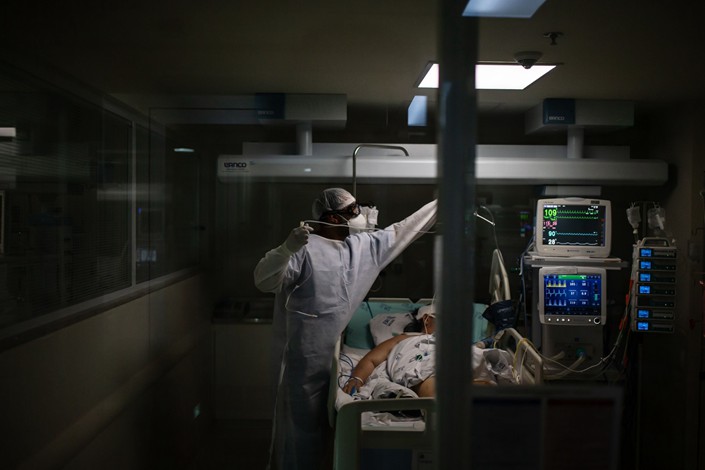 A health care worker works with a patient in the Covid-19 intensive care unit at the Emilio Ribas Institute of Infectious Disease hospital in Sao Paulo. Photo: Bloomberg

(Bloomberg) — Brazil officials said the CoronaVac vaccine developed in partnership with Sinovac Biotech Ltd. was 50.38% effective in preventing coronavirus cases, a number that meets the threshold required by global regulators for approval but that’s well below the 78% figure announced last week.

At a press conference Tuesday, Sao Paulo state officials and researchers from Butantan Institute explained that they split the cases in six categories: asymptomatic, very mild, mild, two levels of moderate, and severe — the first two not requiring medical assistance.

The 78% was calculated considering the mild, moderate and severe cases, officials said. When very mild cases among the 13,000 volunteers are included, the figure is 50.4% — 167 infected in the placebo arm, and 85 in the vaccine arm.

“The vaccine lowers the intensity of the disease,” said Ricardo Palacios, the medical director of Butantan. The renowned local research institute, which accounts for a large portion of Brazil’s overall vaccine production, is developing the shot in partnership with Sinovac.

Palacios said the fact that tests were done in medical personnel, highly exposed to the virus, and that the two doses of the vaccine were given at a short interval apart, help explain the lower rate. Including very mild cases in the results also impacted the final rate, he said.

“We added all possible difficulties,” he said. “When you shorten the time between the doses, you lower the immune response.”

Moderna and Pfizer case definitions in large trials required patients to have one or two tell-tale symptoms of Covid-19, and a positive test to be counted as a case. While both were shown to prevent around 95% of cases, their mRNA technology makes them more expensive and add logistics complications, making them less viable for developing countries.

Localized pain was the biggest side effect of Sinovac’s shot, as well as headaches and fatigue but there haven’t been any serious adverse effects recorded, according to Butantan. Seven volunteers in the placebo arm of the trial needed hospitalization, while none in the group who received the shot did.

The shot proved 100% effective in preventing severe cases, they said, though they added the number was small and not yet statistically significant.

Brazilian regulators and the World Health Organization require vaccines to be 50% effective for approval. The efficacy rate is key for officials to determine how much of the population needs to be immunized in order to halt the spread of the virus.

“We have a good vaccine. It’s not the best in the world, it’s not ideal, but it’s a good vaccine,” Natalia Pasternak, a microbiologist and director of NGO Instituto Questao de Ciencia, said at the press conference.

Last week, officials had said the vaccine was 78% effective in preventing mild cases of Covid-19 and 100% effective against severe and moderate infections. At the time, it wasn’t apparent how the researchers had calculated the efficacy rate, as officials didn’t provide a more detailed breakdown of the study. Based on the information available, the efficacy rate appeared to be around 62.5%.

The confusion over the data is fueling skepticism over Chinese vaccines. Turkey and Indonesia, which are also testing the shot, have reported different efficacy numbers and plan to begin administering the immunization this week.

In Brazil, a poll showed half of the population doesn’t want to get the shot — the highest amount out of the vaccines available. President Jair Bolsonaro, who has said he won’t get vaccinated, has openly bashed Sinovac’s shot “because of its origin” and forbade the federal government from acquiring it, though later backtracked.

The shot is one of the few in more advanced stages in the country, which is quickly falling behind in the global vaccination race. The Sao Paulo government, which plans to start vaccinating its 46 million people on Jan. 25, has already stockpiled some 11 million doses. The Health Ministry signed a deal for 100 million doses with Butantan, adding to boosters it had already bought from AstraZeneca.

Brazil’s health regulator is still reviewing a request for emergency use of CoronaVac.