By Kotaro Hosokawa and Annu Nishioka 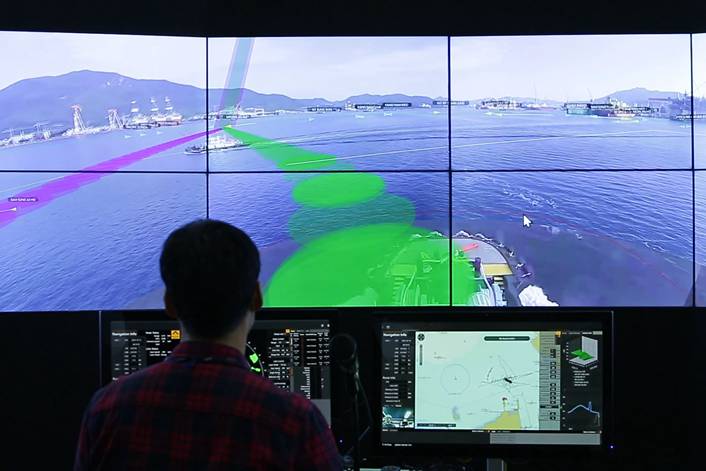 (Nikkei Asia) — Samsung Heavy Industries Co. Ltd. is racing to bring crewless, autonomous ships to market next year in a bid to end years of losses suffered in a relentless price war with Chinese rivals.

The company has made strides toward that goal in recent months. In October, a 38-meter vessel featuring Samsung Heavy’s autonomous sailing system successfully completed a trial at sea, traveling about 10 kilometers (6.2 miles) one way. The ship was not steered by anyone aboad and was only monitored by a control center 250 kilometers away.

The race to develop “smart” vessels is heating up amid an industry shake-up. Companies in Japan, China and South Korea are responsible for 90% of shipbuilding in the world, but the cutthroat competition has undermined leading players, spurring them to merge with or acquire rivals as Chinese players make gains.

Artificial intelligence (AI) charts an optimal course to a destination while radar and high-performance cameras use space-recognition technology, similar to what is used in autonomous vehicles, to scan the surrounding environment.

Human captains at a control center on land use cameras on the vessel for monitoring and operation. In high seas, satellite communication will be used to control the ship, which is also 5G-ready.

“We’ll keep making improvements by linking the system with AI and 5G technology, and commercialize it in 2022,” said a Samsung Heavy official.

European and Japanese shipbuilders had been taking the lead in demonstration tests, but Samsung Heavy has been quickly catching up with them and may even win the race to commercialization.

Samsung Heavy, third place in South Korea, has bled red ink for five years through 2019 and apparently suffered another net loss year in 2020 due to delivery delays amid the coronavirus pandemic. South Korean companies used to tap their huge manufacturing capacity and price advantages to take business away from Japanese rivals, and today the same is happening — except this time around, they are the ones defending their market shares from Chinese competitors.

This is why Samsung Heavy is desperate to develop automation technology as a tool for beating Chinese companies, which have yet to make much progress in the field. It believes taking bundled orders with the navigation system will push up revenue through increased orders and system fees.

The autonomous vessel market is set to grow dramatically to $78.8 billion by 2025, more than 25 times the 2018 level, according to Credence Research Analysis.